The Italian actress reflects on selling her Bulgari jewelry for a cause, her photography and Howard Hughes and Fidel Castro. 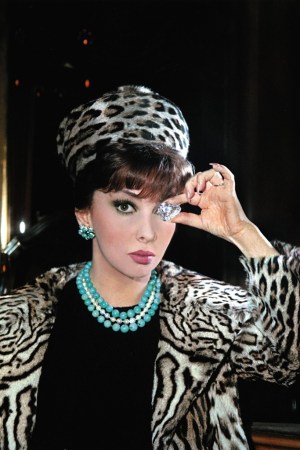 Gina Lollobrigida isn’t the least bit sentimental about unloading a trove of her Bulgari baubles at auction next month at Sotheby’s Geneva.

Like pretty much all of her jewels, the screen siren bought every last one. In the Fifties, the Italian actress even refused gems from the my-way-or-the-highway dealmaker Howard Hughes, who tried in vain to marry her for 13 years. “Obviously, he could have bought all of the shop at Harry Winston. I told him, ‘No, I don’t like jewelry,’ so that he would forget about buying me jewelry,” she says. “We were going out every day to this little café, so one time I said, ‘OK, you want to buy me something? Buy me this paper fan.’ I still have this present from him.”

Typecast by millions as the Italian knockout in 60-plus films (not to mention runs on “Falcon Crest” and “Love Boat”), Lollobrigida insists that her life is and always has been more dimensional than what fans saw on the silver screen. With an estimated net worth north of $200 million, the less-talked-about Lollobrigida is an accomplished photographer, sculptor and philanthropist who now divides her time between Rome, Monaco and her art studio in Pietrasanta, Italy, but is still gunning to go back to India and to have her first exhibition in New York. During a sweeping phone interview, she describes photographing Fidel Castro playing ping-pong, palling around with Maria Callas on Aristotle Onassis’ yacht and how a TV program about a deathly ill girl prompted her to sell 23 Bulgari jewels to help benefit stem-cell research. “That’s life, you know, one day is one thing, and another day is different. Before I loved having jewelry to wear to all the parties. Today I don’t care anymore. I am glad that I was so moved by this little girl. If there is something that you can do to help, why not do it?”

WWD: Do you have words to live by?
Gina Lollobrigida: It’s good to have interests in life because I never had the time to be bored. That’s very important. As long as we have the possibility to live, then let’s do it with courage. More specifically, let’s do the best we can with life by helping people who are not as happy and lucky as we are. To leave something that’s very important in life — to think of others and not all the time about ourselves.”

WWD: How did you get into photography?
G.L.: In between films I wanted to be busy, so I got on an airplane and went to places that I didn’t know to take photographs. I published a book in 2007 of my reportage from 25 countries. I used to see the poor, unknown people, but I also went to see heads of state. I must say they were more curious to see me than I was to see them. With me they were not afraid. I was not interested in politics. I was interested in the side of the person that was not written about in the newspapers. I went to Cuba with an American secretary, and I thought, “Why not also do a film?” so I had a cameraman and a soundman. Fidel Castro didn’t mind. He was very nice. I saw him for 12 or 13 days, every day. I made a very interesting film. I haven’t shown it yet. Actually, I would like to sell it. It was my first documentary. Then I did another one on Indira Gandhi, who was a person I loved a lot and went to see several times.

WWD: What was Castro like with you?
G.L.: He told me, “You are not like other journalists.” He was like a child. He played basketball with all the young fellows, and then he would fall on the floor. He didn’t care. He played ping-pong with the students at the schools we went to. He was a human being. I gave a photograph to Time magazine, and they said it was the most beautiful photograph of Fidel Castro that they had ever shown. I only published two or three. I still keep them because I am very possessive with the things I do. Before I did not want to sell them, but now I’m more obliged.

WWD: Why were you so taken by India?
G.L.: When you see India, you can see what there is [happening] around the world. First of all, there are more than 200 religions. With so many religions, the country always has troubles because the people think differently. And religion is an education you learn from the time you are born, and religion is stronger than politics. The people are very proud. Also India’s history and monuments are like stepping into another era. They are dressed like from an older century, so it’s beautiful. I was lucky to meet Indira Gandhi and talk to her like one woman to another woman. She realized I was crazy about taking photographs and that I forgot about danger and would go wherever something was happening. One day in Bengali I found a truck filled with 35 policemen outside the hotel. Indira sent the police so that I wouldn’t get in trouble. I thought, If I have a whole truck of policemen, I can go work at night. A few days later I photographed Indira in her garden playing with a nephew near an elephant toy, not a real one. It is near the spot where she was killed years after.

WWD: What else stands out from your travels?
G.L.: In South Africa, I went to see the miners down in the Kimberley Mine that was owned by the Oppenheimers. One jewel that will be sold [May 14] was a gift from Mr. [Harry] Oppenheimer. It is a 5-carat diamond that is still attached to the stone so it looks like a little piece of salt. The day that I visited the mine they found the ninth-biggest diamond in the world. I was glad that I gave them good luck.

WWD: How did your acting career begin?
G.L.: Just after the war, I started painting and doing sculpture. I was stopped leaving school and asked to do movies. I was not interested at all. But at that time we needed money to eat. We lost everything in the war. The pay was like 1,000 lire, about $500, a day, so I started to make movies. The first time I went to Cinecittà [Rome’s legendary film studios] on a bicycle, and then the next day I was in a Rolls-Royce that the producers had given me as a present. They were sure that I would have a big career.

WWD: What was the story with Howard Hughes?
G.L.: I was married and for me the marriage was one for life. One reason I refused Howard Hughes was because he was too rich. There was too much of a difference between me at that time and him. I couldn’t concede to have a man near me where I had zero and he had too much. So I said, “If you sell everything, perhaps.” — stupidly, because even if he sold it, he still would have had money. But I was very innocent at that time. He hated publicity. He hated journalists. He was completely different from what the people thought of him.

WWD: What would surprise people to learn about your friend Maria Callas?
G.L.: It was fantastic to see Maria with [Aristotle] Onassis, because he was the strong one and she was in love with him. She was sweet, dependent on him. We laughed and sang together. Actually, during dinners, especially on the yacht, we would sing instead of speak. Because when you are on a boat, you know you feel like a child and do silly things like walk with weak knees. Then when the marines came up we tried to be more serious. We would see one of my movies. They would play backgammon. We stopped in Cairo, went to the museums and I took a lot of photographs. Maria preferred to stay on the boat, so I was always going out with Onassis. He had more courage. Maria was more calm. I loved her a lot. She didn’t trust some people, especially after Onassis left her and she lived for a little bit alone. It was a big love affair between the two of them. She suffered when Onassis went with Jacqueline [Kennedy.]

WWD: How did she deal with that?
G.L.: I think there was a story that Onassis had a kind of game with another Greek friend that he could get any woman he wanted. This is what we thought [of] this business with Jacqueline….It was like a joke. It was not a love affair, obviously, but also for other reasons. There are men that you can see love one woman. You can see when a man doesn’t love a woman. With Jacqueline, it was not a love affair. It was a contract, I mean, terrible. In any case, even when he was with Jacqueline, he went to see Maria again. There were photographs so this is not something…

WWD: We’re getting off track. Which fashion designers do you like?
G.L.: Valentino. In France, I was very fond of Chanel. She was full of life, but when she started to talk, she didn’t stop. In case I had to go to lunch, probably I would wind up going for dinner. She was bright, nice. I used to be much thinner and she was always saying that I was better than the models. I still have these Chanel suits that fit me very well. She was very fond of me because I was buying dresses a lot. Also, I like Saint Laurent and Balmain, but mostly Chanel. I continue with [Karl] Lagerfeld. In Italy, I dressed quite a lot in Sarli. To me, he was number one. His dresses were so light and sculpted.

WWD: What would you like people to think of when they hear your name?
G.L.: At one of my exhibitions, some people told me, “We thought we knew you. But now that we have seen your sculptures, now we can say that we know you completely.” That was the most beautiful compliment, because I am not just this image that a lot of people imagine. I am an artist. When you are an artist you never get old, because you are always thinking, “Now I want to do this. Now I want to do that.” It’s not the money, because I never thought about the money. I always loved the people without money.