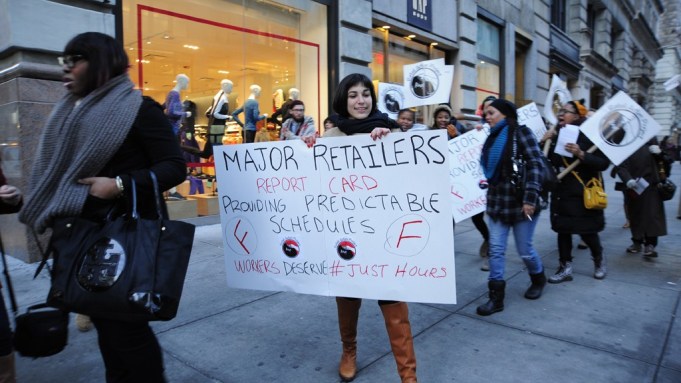 About two dozen workers carried signs and attempted to hand out “report cards” to managers at three stores — Burlington Coat Factory, the Gap and Forever 21 — in the Flatiron and Union Square area here as part of an initiative called #JustHours.

“This is a critical time for retail workers as they struggle to keep up with both consumer and employer demands during the height of the holiday shopping season,” the group said. “Despite the fact that major retailers rake in most of their profits during the holidays, workers are severely underscheduled and lack the amount of hours to make ends meet during this normally joyous season. What’s more, many retail workers now face on-call shifts, forcing them to be available for work without any guaranteed hours.”

Sasha Hammad, deputy director of RAP, said, “Traditionally, retail workers will get full-time hours and overtime at this time of the year, but there’s been a disconcerting shift this year.” She said many workers are only being called in to work four- or five-hour shifts, making it impossible for them to pay their bills.

RAP utilized workers from each of the targeted retailers to lead the group inside the stores and attempt to get the managers to meet with them to discuss solutions. At Burlington Coat Factory, the manager would not meet with the group, and security asked them to leave. The reaction was the same at the Gap. At Forever 21, the group chanted outside the store, and the employee, Anthony Johnson, said that he is now working only one to two days a week, less than half the time he worked when he joined the company earlier this year.

A Gap spokesperson said, “Gap Inc. operates from a year-round policy of flexible scheduling. Our store leaders communicate the options for shifts in advance so that employees can plan accordingly and ensure the right balance for what is best for employees and the business.”

Burlington Coat Factory and Forever 21 would not comment on the protest.

A RAP spokesperson said no other demonstrations are planned for the holiday season.

RAP is an organization of retail workers dedicated to improving opportunities and workplace standards in the retail industry.