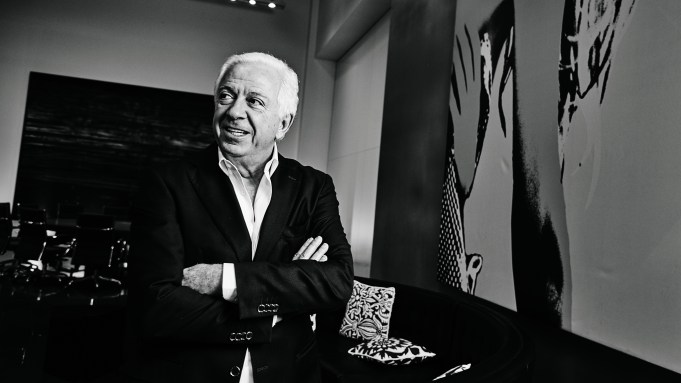 The #MeToo movement — and allegations of sexual harassment — have cost Paul Marciano his job.

An investigation into alleged misconduct against the Guess Inc. cofounder and chief creative officer has reached a close, with the longtime fashion executive stepping down Monday as the firm’s executive chairman and the company revealing it will pay out $500,000 in settlement agreements.

The agreements, which are not confidential, would resolve claims of inappropriate conduct against Marciano made by five people. The company offered in its filing with the Securities and Exchange Commission Tuesday that the settlements do not admit liability or fault and were done to avoid the cost of taking the matters to court.

The news ends a flurry of allegations that were triggered against the Guess cofounder, who is credited with creating the sexy image of the Guess Girl synonymous with the brand still today.

The swirl of claims lodged against Marciano began in February initially with model Kate Upton, who took to social media first hinting at alleged misconduct. She went public not long after to outline the specifics of her allegations, which stemmed from a July 2010 photo shoot. Upton’s comments sparked additional claims from other models, one of which included similar allegations against Mohamed Hadid, the father of Gigi and Bella Hadid. Both men have firmly denied the allegations.

Guess, in response, formed a special committee to investigate the claims against Marciano, and in its SEC filing Tuesday, the company said it interviewed more than 40 people in addition to looking through e-mails, human resources and legal files, photos, invoices, social media messages, travel itineraries and other documents totaling some 1.5 million pages.

The committee’s findings appear to have rendered a mixed bag of conclusions.

“Many of the allegations could not be corroborated. In some cases, no conclusion could be reached because the individuals either declined to be interviewed or provided insufficient information to the investigators,” Guess said in its filing. “And, in other cases, the investigation found that credible accounts were given by both sides. The investigation found that on certain occasions Mr. Marciano exercised poor judgment in his communications with models and photographers and in placing himself in situations in which plausible allegations of improper conduct could, and did, arise.”

Marciano, who has a 15.6 percent stake in the company, indicated to the board Monday his intention to resign as executive chairman, at which time Maurice Marciano was made board chair. Paul Marciano will fully transition his chief creative officer duties and other responsibilities to ceo Victor Herrero by Jan. 30, when his employment contract expires. Marciano will remain on the Guess board.

The executive, who has been on unpaid leave since he stepped aside at the start of the investigation, will resume being a paid employee of the company until his contract expires. Marciano confirmed to the board he would not renew his contract at the end of that term, the filing said.

Shares of Guess were off about 1 percent in after-hours trading Tuesday to $22.15 for a market value of $1.81 billion.

Marciano created the iconic image of the Guess girl in the late Eighties and Nineties, and they have over the years included everyone from Claudia Schiffer and Anna Nicole Smith to Laetitia Casta and Paris Hilton. The campaigns filled most of the world’s leading fashion magazines, as well as ran on TV and in outdoor advertising.

But he is the latest fashion industry figure to fall as a result of the #MeToo movement, joining the likes of Harvey Weinstein — who once owned Halston and Charles James in addition to his movie activities, and also is alleged to have invested in his wife Georgina Chapman’s fashion brand Marchesa.  (Allegations that have recently resurfaced even as the fashion world was widely aware that Weinstein took a detailed interest in his wife’s company, from outfitting actresses in the brand’s dresses to discussing with journalists how the company was covered and the collections reviewed.)

Others who have faced sexual harassment allegations in the industry include photographers Mario Testino, Patrick Demarchelier, Terry Richardson and Bruce Weber.

In Marciano’s case, Upton subsequently detailed her allegations against him in an interview with Time magazine. She claimed she was shooting a lingerie campaign for Guess in July 2010 when Marciano grabbed her breasts and then continued to inappropriately touch her throughout the rest of the meeting. On a second shoot, Upton alleged Marciano harassed her, calling up to her hotel room and insisting to come up. The model said the following day she was dismissed from the job after her agency was told she had gained too much weight. Photographer Yu Tsai confirmed Upton’s story to Time.

Marciano told Time that Upton’s allegations were false and added “I have pledged to Guess and its board of directors my full support and cooperation with a fair and impartial investigation.”

Upton’s initial comments on social media Jan. 31 alluded to misconduct by Marciano, which the executive strongly denied in the days following, more recently telling entertainment site TMZ the model’s accusations against him were retaliation after a failed photo shoot with the denim company.