The brand best known for its backpacks was founded by brothers Jamie and Lyndon Cormack in 2009.

Jon Hoerauf has been named CEO of Herschel Supply.

Herschel Supply Co. has a new face at the top of its C-suite.

The Vancouver-based brand, best known for its backpacks, has brought Jon Hoerauf on board in the newly created role of chief executive officer, effective immediately. Hoerauf, the first non-family member to helm the privately held company, was with Arc’teryx for the past eight years, most recently as president and general manager. In mid-2018, he was also named president of apparel for Amer Sports, Arc’teryx’s parent company.

Herschel was founded by brothers Jamie and Lyndon Cormack and celebrated its 10th anniversary last year. The brand started when Lyndon, who was at Vans in Canada, and Jamie, who was with K2, were searching for a way to work together. They settled on the idea of backpacks, which were highly sought after in both the outdoor and luxury markets. The brand is now sold in more than 10,000 stores in 94 countries, and at the end of 2019, Eurazeo invested $60 million into the brand along with a consortium of investors that included Alliance Consumer Growth and HOOPP Capital Partners, the private capital arm of the Healthcare of Ontario Pension Plan.

Lyndon Cormack said the decision to bring in a CEO was made prior to the pandemic and Herschel started to work with a recruiting firm to find an “A-level CEO.” Although those plans were interrupted by COVID-19, they were reignited last year. “We got to meet a lot of incredible people,” he said, adding that the goal was to find the right person “to help guide the next 10 years.”

They decided on Hoerauf, who also spent more than a decade at The North Face, where he was global product director for the Summit Series, its high-performance products. During his tenure there, the business grew from $100 million to $2 billion. At Arc’teryx, he served first as vice president of global commercial, before being elevated to president of the upscale outdoor brand and Amer Sports, which also owns Salomon, Peak Performance, Atomic, Suunto, Wilson and Precor.

Lyndon Cormack said Hoerauf’s wealth of experience will complement that of his and his brother’s, who will continue as managing directors and cofounders.

“With collaboration at top of mind, finding a seasoned leader like Jon who we can join forces with, and who can bring out the best in us, our team and our partners, is something we’re really excited about,” said Lyndon Cormack. “We want to ensure we’re exploring every avenue that drives value to anyone who has a touchpoint with our brand.”

“Bringing Jon on board will allow Lyndon and I to focus our energy and passion around the things that get us most excited — expanding our business, innovating our products, and continuing to evolve creatively,” added Jamie Cormack. “Our 10-year anniversary felt like the perfect milestone to bring on a CEO with the expertise to take us into this next chapter.” 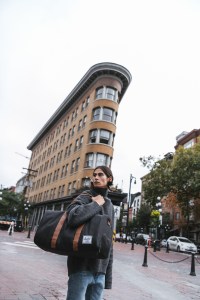 Lyndon Cormack said bringing Hoerauf on board is “the most important investment we’ve ever made,” and the brothers will have no problem allowing him the freedom to run and expand the brand.

“I’m responsible for the entire business and this will allow Lyndon and Jamie to focus where their passion and expertise is,” Hoerauf said. “But the buck stops with me.” Although he acknowledged this is “a huge leadership moment for them,” he pointed to the “amount of humility” the brothers brought to the recruiting process as they sought an executive to “complement them and help them steer around the speed bumps. It gives me a good feeling.”

Lyndon Cormack added that although Herschel started with just him and his brother, “there are now hundreds of people at the brand. “We realized early on that we were not good at everything.” So they brought in experts in finance, IT, marketing and other areas to help run the business. “This is not the Jamie and Lyndon show,” he said. “We would be nowhere without our team. This is a big investment for us and if we don’t set Jon up for success, shame on us. No one pushed us to do this, we asked for it and having a professional CEO is the most exciting thing we’ve ever done.”

With that as the backdrop, Hoerauf said the goals for the brand are to continue to expand its geographical reach to be “globally relevant,” and increase its product offerings. While backpacks are still Herschel’s best-known product, today they represent less than half of total sales. Other top sellers include wallets, duffel bags, crossbody bags, headwear and apparel, including outerwear and basic essentials.

He said the big focus for the brand is expanding in North America, especially the U.S., as well as Asia, notably China. In these and other regions, he said the focus will be on key cities, or “epicenters,” such as New York, London and others urban markets. In terms of product, Lyndon Cormack said he views apparel as the brand’s “next opportunity,” and is expecting to reveal a series of collaborations later this year.

“Jamie and Lyndon have built a phenomenal brand that is ultimately a design company at its core,” Hoerauf added. “This excites me not only from a product standpoint, but also in seeing how they have designed the organization for success. With the company being 10 years old, it has an unbelievably strong foundation and huge opportunity to further disrupt the category with its product and storytelling. I take great responsibility and pride in being a steward for what they have built.”

In addition to Herschel, the Cormacks had also owned the buzzy retail store, Totokaelo, as well as Need Supply Co., both of which closed during the pandemic.