Hitting the Right Notes at Coty 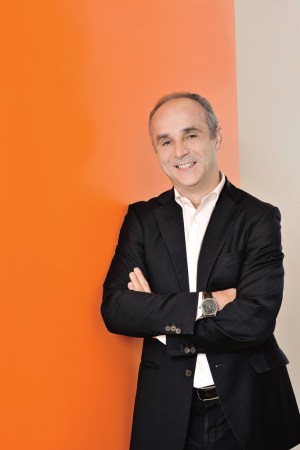 The music of American pianist Keith Jarrett tinkling in the background adds a lively ambience to the bright Paris office of Coty executive Michele Scannavini. “I listen a lot to music—any kind of music,” he says. Scannavini’s other interests cut a wide swath. He also has a soft spot for Vespas, for instance, on which he likes to tool around Paris. But Scannavini is probably best known for his steely business acumen, which has helped transform Coty Inc. into a major fragrance player. As president of Coty Prestige, the executive has under his purview an eclectic array of brands, including Balenciaga, Bottega Veneta, Calvin Klein, Jennifer Lopez, Karl Lagerfeld and Marc Jacobs. It’s a portfolio that continues expanding. Late last year, the division snapped up the Philosophy skin care brand and the Calvin Klein makeup license. In its fiscal year ended June 30, 2010, Coty Prestige generated 51 percent of Coty’s total sales of $3.6 billion.

Since your start in the beauty industry in 2002, what have been some of the largest changes you’ve seen?

When I joined this industry, everyone was looking to the U.S. and Western Europe to really find growth. Today, the growth is in Asia, South America, Eastern Europe. Another structural change is we saw a progressive consolidation— both on the manufacturing side and on the retailer side. So fewer, stronger players. The third is that the consumer today wants a more direct contact with brands. Here, the role of digital technology has taken on enormous importance. Then there is the celebrity factor. It’s not only the fact that a lot of celebrities created products in their names, but also that they are used widely as testimonials, as faces for products.

What has most surprised you about the beauty business?
Scale is not as important as in other industries. I worked several years in the automobile industry, where scale is everything. Here, the market is very fragmented. You have a huge number of players, and there is space and opportunity for small and niche players to be successful. Another thing that’s very impressive and related to the dynamism is that the role of innovation in the business is huge. Between 15 and 20 percent of your sales each year are due to new products.

Prior to Coty, you worked in the fashion and luxury automobile industries. How have you leveraged that savoir faire into your work today?

It’s been very helpful, because if you start with an experience in cars — we’re talking of Ferrari, so high-image luxury cars—I was basically working on a dream. I learned how to work, develop, nourish a brand where emotion, image is everything. This was very helpful for me in the cosmetics industry. On the other side, fashion has been particularly helpful — first because I see the dynamic of being so close to trends that is [true] for fashion is something that we see increasingly also in beauty. Having knowledge of this industry allowed me to have a very healthy dialogue with our licensors.

How do you see beauty evolving in the next two to five years? What must the industry pay attention to most?

I would put the focus specifically on the digital revolution. When we think that sources say that five years from now more than 20 percent of marketing investment in total U.S. industries will be on digital, that 10 to 11 percent of total retailers will be e-commerce, those two things are clear in indicating that the real revolution is in this market. It is a revolution in terms of the way you understand your consumer, the way the consumer has access to information and a revolution in the way they buy product.

Do you think there’s a good chance of a double-dip recession? And if so, how should we prepare?

I do not believe in a double dip. The conditions today are significantly different to [what they were] three years ago. Today, what we are living is a situation that is difficult mostly driven by government and the implication of financial institutions with government debt. When we look at industry today, corporations are much healthier than they were three years ago. Everybody did a huge job in the last two or three years of being more efficient in managing costs down. Three years ago, the crisis came out of the blue; it was very sudden and very sharp. Today, people are already thinking of preparing themselves for a potential slowdown. So, for instance, inventory is much lower. I believe there is going to be a slowdown.

What’s driving the revenues gain in the U.S., and is it sustainable? What will you do to drive sales for the next 24 months?

Everybody has been a little bit taken by surprise by the rate of growth of the U.S. market in the first nine, 10 months of this year. It is difficult to say what was driving it. It was a combination of two or three things. The market was particularly dynamic: We have seen some new products and innovations that worked really well. Retailers have increased their activity in trying to create an environment that is more interesting to the consumer. But I don’t know if all of this can explain the 8, 9, 10, 11 percent growth. I believe that’s not sustainable, that we are going to see in the second [half ] a market coming back to a more, say, psychological growth in the area of 2 or 3 percent. We’re trying to be as active as possible on the innovation side, and will keep investing behind our brands — increasing particularly our investment in digital marketing, because this is a very powerful tool to attract young consumers.

In Asia there hasn’t been a historical predilection for using fragrance. How are you establishing a beachhead there? How are you seeing consumption evolve?

Culturally, Asia is not a [market] for fragrance. In Japan, fragrance has never really developed above being 5 or 6 percent of the total beauty market. But it is also true that today the driving country is China. There is still a very virgin territory to develop, in need of a lot of education, but China could be the center of the real development for fragrance in the Asian world. We also know they are extremely sensitive to fashion and trends, so having the opportunity to bring important designer names with fragrance products will be a great way for Chinese people to approach a designer with a relatively low out of pocket, and to start enjoying part of this dream. Another [area] that is culturally extremely fertile for fragrance is India. There, it is going to take longer to build infrastructure, but once it’s [in place], the market will skyrocket. China [will develop] in the next decade. India is difficult to anticipate. I don’t think it is going to be in the next five years, but it’s going to come.

Europe historically is a strong fragrance market. What impact is the economy having on your business there?

So far, none. The business is doing very well, even in countries like Spain that are under big pressure. Overall, the market is more resilient than in many other industries.

What emerging retail channels excite you the most?

Digital, because its dynamics are completely different from brick-and-mortar. Another channel that is developing very nicely in the U.S. and has started developing in the rest of the world is the TV channel, which is interesting, because it allows you to tell in-depth the full story related to your product and to create an environment. It can be really entertaining.

Do you believe in mentors?
I believe that you always have to be on a learning process in your life — in [work life] as in your private life — and it is very important that you observe and try to learn from situations and people. I had the opportunity to work with some managers who I observed and from whom I tried to learn as much as I could. It is also true that everybody has his individuality.

How would you describe your management style?
I like a lot to create an environment that is full of energy, with a lot of passion, with a strong entrepreneurial spirit. My rule is essentially to create the condition for people to best express their talent. At Coty, we were able to build a group with a very high level of trust and performance, because people feel they can really express their personality, their skill, their talent. That is, for me, most important.

How have you seen your management style evolve?

During these 10 years with Coty, it has evolved because the businesshas changed dramatically. The company has become much bigger, more complex. So there has been a need to rebalance a little bit the push for growth… with some more robust processes and control, in order to ensure that the machine keeps on going with a lot of the energy and dynamism but in a controlled and safe way.

What’s the most difficult business decision you’ve had to make and would you do it the same way today?
One that was hard at the time was when we decided to sell Yue-Sai, the Chinese skin care and makeup brand, in 2004. By that time, already we could see China as the big next thing. We decided to be consistent with our focus that was—as a first step—on our development to become very strong in fragrance. Then we were still a challenger. One year later came the acquisition of the Unilever business. So we made a choice: We decided to give up something that could have been interesting to prioritize something that was our key objective in terms of growth. Given the result, I was happy that we took this decision, because now we are back in China, stronger as a company, ready to be much more effective in terms of investment than we were six, seven years ago.

What drives you?
Passion, emotion. I always disagreed with the vision of the manager who has to have no emotion — that if you want to be a clear thinker, take emotion off the table. A positive emotion helps a lot to drive the vision, to drive the motivation of the organization. I am driven by the joy of working with people.

What do you do to relax?

I’ve always had a very special relation with music. In sports, what I find extremely relaxing is hiking in the mountains. Last but not least is my little blue Vespa. I always go [places] by scooter. It is one of the most beautiful inventions, the Vespa — mostly the light blue one.

IN BRIEF: Michele Scannavini, born in Ferrara, Italy, received a degree in economics from Milan’s
Bocconi University. He began his career at Procter & Gamble—where he remained for six years—before working at dairy goods brand Galbani between 1990 and 1992. From 1993 to 1999, Scannavini headed up sales and marketing for Ferrari and Maserati. He was then chief executive officer of Italian sport apparel and footwear firm Fila Holding SpA between 1999 and 2002. In March 2002, Scannavini became president of Lancaster Group Worldwide, the former name of Coty Inc.’s Paris-based prestige division, which is now Coty Prestige.