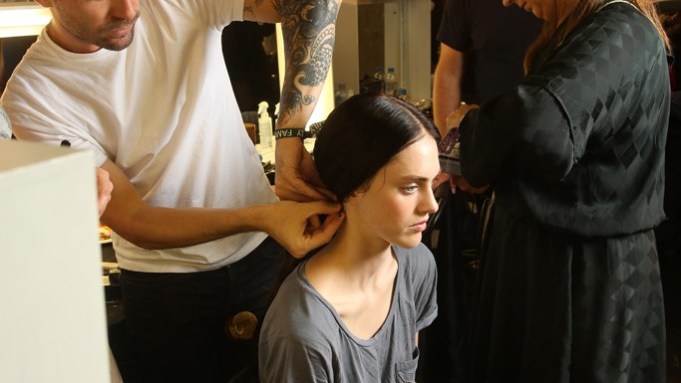 Who could forget their first? Fashion week, that is. Anna Dysinger travels back in time with some  hair and makeup superstars.

ANTHONY TURNER, speaking at Creatures of the Wind
“I went to do a hair test, introducing myself to the designer and all the people who where there. I spent 10 minutes telling them what I thought the hair should be. They listened, then finally said, “Anthony, we didn’t book you for this show.’ I had the wrong address. My test was two blocks away.”

EUGENE SOULEIMAN, speaking at Peter Som
“I went to St. Barth’s prior to fashion week for holiday. I was riding a bike down some hilly roads, and I saw these two really cute girls. (It was obviously when I was much younger and fitter.) I decided to turn the bike around and ask them out, and I drove straight into the side of a hill and broke my foot. So, I was on crutches for my very first Prada show. The morning of the show, I woke up and clipped my foot on a brass doorstop and broke my other foot. I didn’t end up at Prada.”

TOM PECHEUX, speaking at Altuzarra
“I was assisting Linda Cantello at Chloé. I was a new kid on the block. No one knew me, and models want to go to people they know and trust. I’d been asking the models if I could do their makeup, and everybody kept saying no. I was depressed. I went to the buffet, and, when I came back, Christy Turlington was sitting at my station. Stupidly enough, I said, ‘Are you waiting for Linda?’ She said no, and then I just stood there. Finally, she said, ‘Well, you could start my makeup.’ I started shaking.”

ORLANDO PITA, speaking at Diane von Furstenberg
“When I started, you didn’t do fashion week — you did one show. That was Martine Sitbon, and it was her first show, too. I didn’t know people worked with a team of assistants, so I just asked a friend. We did all 25 girls. When Martine invited me to her house to watch the show four days later, she said, ‘You know, you looked so frantic. The girls looked great, but most people work with a whole team of assistants.’ I was like, ‘Ohhh, that’s how they do it.’ ”

YADIM, speaking at Peter Som
“I was assisting Pat McGrath in Milan. I hadn’t slept in two days, and I was exhausted — I didn’t even know where I was. She came over and said, ‘You wanted to work with Pat McGrath? Now you know.’ It was at that moment when I was like, ‘Wow, so this is what it’s really like.’”

DICK PAGE, speaking at Tess Giberson
“It was New York, 1992 —Calvin Klein. I didn’t know how it worked. I had never assisted anyone before and I never had assistants, so I brought everything in for products. It was classic early Calvin makeup, which was a little bit of lipstick on the bridge of the nose and cheeks and some Vaseline on the eyes. We were ready about two hours before the show.”

PAT MCGRATH, speaking at Diane von Furstenberg
“I traveled very heavily, with tons of bags. I was pulling them out of the car when I was doing a show in Paris, and a guy tried to run off with one of them. I started screaming, but the bag was so heavy that he staggered and then just fell over. He left the bag there.”

GUCCI WESTMAN, speaking at Rag & Bone
“My first season, everyone kept asking me, ‘What shows have you done? What shows do you always do?’ I just kept saying, ‘Oh, you know…’ [and] trying not to answer. Even Tommy Hilfiger asked me. I remember thinking, ‘Sh-t!’ Orlando Pita was doing the hair, and he saw me freaking out. He came over at the end and patted me on the back and said, ‘We made it.’ ”

VAL GARLAND, speaking at Monique Lhuillier
“I moved to England from Australia a week before London Fashion Week. Red or Dead asked me to do the hair, and I said to my agent, ‘I don’t know anyone here. How will the assistants recognize me?’ She told me to stand outside the show and tell her what I was wearing. So, I wore a bright-green rubber coat. Green. Rubber. With a giant red Gerber daisy.”

YANNICK d’Is, speaking at Sally LaPointe
“1974. I was an assistant, along with Thierry Mugler. I tried to look very serious, but I didn’t feel prepared at all. I was shaking. The girls were so beautiful — that’s what I remember the most.”

DIANE KENDAL, speaking at Jason Wu
“I was assisting Linda Cantello. It was back in the days when people used to drink before the shows. Someone opened a bottle of Champagne, and the cork flew straight into a model’s eye. She ended up at the hospital.”

ODILE GILBERT, speaking at Altuzarra
“The first big show I said yes to was John Galliano, and I went home and didn’t sleep because I was like, ‘Why did I say yes? I can’t do it!’ At that time, I had all the top girls — Naomi, Kate, Stephanie, Linda. It was 50 girls — one girl, one look — so, 50 different looks. I was like, ‘Ahhh!’ ”

WARD STEGERHOEK, speaking at Tess Giberson
“I was 19, and I came over from Holland to assist Christiaan [Houtenbos]. I had so many ideas, and I was like, ‘We should do this and this and try that!’ He just told me to be quiet. That was it. I shut my mouth after that.”

NICK IRWIN, speaking at the Blonds
“I did my first fashion show as an assistant in Sydney when I was 19 years old. Linda Evangalista was in the show, and the lead was working on her hair. He was toning her hair and he snapped it right off. She was cool about it, though. It was in the early Nineties, when she was cutting her hair a lot.”

FRANCELLE DALY, speaking at 3.1 Phillip Lim
“The whole craft service table, with all the food and the water, completely collapsed. Models were standing nearby, and they were covered in juice. We were just glad they didn’t put the designer’s clothes on way before the show started.”

JAMES KALIARDOS, speaking at Rodarte
“The first show I ever did was for Isabel Toledo. I did hair and makeup, and I didn’t understand that you needed assistants. There were bright-red lips, and then I stuck these round Styrofoam balls in everyone’s hair to make a giant circle. I didn’t know how the timing of everything worked backstage, but somehow I got everyone done. It was amazing.”

GUIDO PALAU, speaking at Alexander Wang
“It was probably 1993. I think it was Helmut Lang in Paris, and my first memory is just getting through the show. I was excited but naïve. I didn’t know what I was doing — I still don’t. Just winging it.”

PAUL HANLON, speaking at Rag & Bone
“I was doing Altuzarra, and 16 of the girls came straight from Alexander Wang. The hairstylist used lots and lots of gel, and we didn’t have any facilities to wash the hair. We had girls leaning over big plastic bins rinsing their hair with bottles of water. There was so much gel that some girls were literally in tears.”