The actress discussed her role with the brand in front of an audience of the beauty world’s heavy hitters.

By Julie Naughton on May 9, 2014
View Slideshow 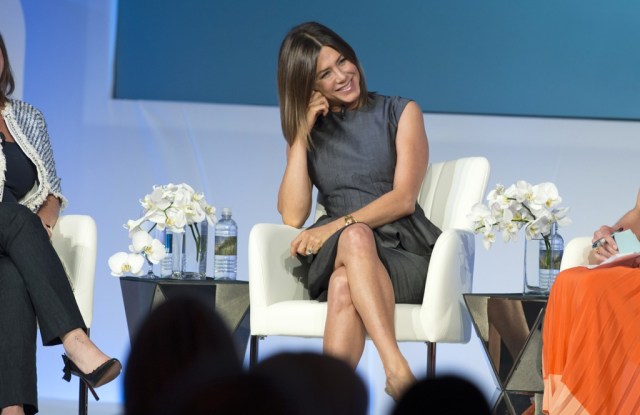 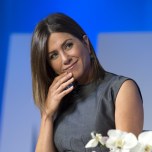 “This is the way God created me,” Aniston said with a chuckle as she addressed the executives gathered here for WWD’s Beauty CEO Summit. While her usual blonde is likely to soon return, Aniston, clad in a gray Dior dress and Christian Louboutin pumps, relaxed in her chair onstage as she noted that the reappearance of the medium-brown shade she had growing up was the result of her serious role in 2015’s “Cake,” in which she stars as Claire Simmons, who is trying to get her life back in order after a serious accident. Aniston also executive produced the film, which she wrapped Wednesday.

The hair might have been different, but Aniston’s signature smile was firmly in place as she discussed her role with Living Proof in front of an audience of the beauty world’s heavy hitters.

The actress, who bought into the Boston-based hair-care brand in 2012, isn’t a mere silent partner: she helps to oversee hair-care brand development and creative marketing direction for the hair products. She also collaborates with the company’s hairstylists and scientists on new hair-care product ideas.

“Who doesn’t want to have equity, especially at a company that is in its beginning stages?” said Aniston, who said she was eager to be a partner, rather than a face, of a brand, and is in fact still eager to expand her beauty repertoire. She described the Living Proof gig as “a great start.”

“It’s a wonderful product line that I believe in and which makes a difference to so many people — it lives up to its name,” Aniston continued. “And it’s fun to be involved creatively from concept to execution, sharing my ideas. After spending 25-plus years in makeup and hair, you learn what works and what doesn’t work, what damages your hair — what you have to mix five products together to achieve. And [in my Living Proof] role I have all these men in white lab coats where I can throw out ideas.”

The first project Aniston worked on as an owner was the newly released Perfect Hair Day range, which includes shampoo, conditioner and styling products.

Aniston likens the Living Proof experience to “like me evolving from simply an actor for hire to producing and directing. You have the ability to be part of something from the ground up. I geeked out at the MIT labs.”

She admits that she sometimes has to laugh when people look up to her as a hair icon, as she “hated” her hair growing up, lamenting its texture and its unwillingness to cooperate with styling efforts. “I always had problem hair,” she said. “But I sat in enough chairs of these amazing creators and learned how to manage it.”

While Aniston repeatedly praised longtime friend and stylist Chris McMillen, whom she has brought into the Living Proof fold as an adviser and stylist educator, she made it crystal clear what she thought of the “Rachel” cut, named for her “Friends” character. Reportedly, it was inspired by a cut done by famed hairstylist Ward Stegerhoek, a founder of Living Proof who still works with the company in product development.

“It existed? So this is [Stegerhoek’s] fault,” Aniston said of what was arguably the most-copied haircut of the Nineties. (A now-sober McMillen once famously admitted that he was stoned when he created the “Rachel” cut.) The audience laughed loudly at the sentiment as McMillen grinned.

Aniston’s favorite hairstyle? She demurred — saying that it’s easier for her “know what I don’t like.” But she named the beachy-tousled, shoulder-length look in 2004’s “Along Came Polly” as one favorite.

Best business advice she’s been given? Aniston is succinct: “Learn the power of how to say no.”

Any heroes? “Gloria Steinem. I’ve known her for years. She’s just been a wonderful inspiration for me over the years.”

Aniston’s fame has greatly benefited Living Proof, said Jill Beraud, the company’s chief executive officer. “Our biggest challenge when I joined the company was how to make it better-known,” she said. “Obviously, with Jennifer’s iconic status, she put a spotlight on the brand. And we didn’t just want a spokesperson. What we love about Jen is that she’s so entrepreneurial and she’s a great collaborator, so we had the same goals. She has amazing product ideas and suggestions about marketing and package design. More and more, consumers really do care about what’s behind a brand, who’s standing behind it. There is an awareness that Jen is a co-owner, and that authenticity adds to the brand’s credibility.”

And the company is positioned to continue its innovating ways. In addition to Aniston’s capital, Living Proof inked a $75 million deal in January with Valeant Pharmaceuticals International Inc. for an innovative polymer film technology. The creation, Strateris, is a proprietary cross-linking, breathable, flexible film that can be used a variety of beauty products, including skin care and color cosmetics, said Beraud.

While neither Aniston nor Beraud would discuss the size of the business, industry sources estimated that Living Proof’s sales were about $100 million in 2013.