He was a longtime buying-office executive who founded his own firm. 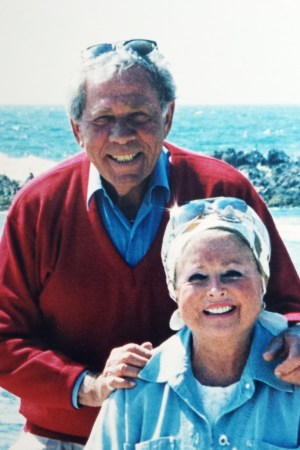 Jerry Bernstein, a longtime buying-office executive who founded his own firm, died Monday of a cerebral hemorrhage at South Nassau Communities Hospital in Oceanside, N.Y. He was 83.

Bernstein was born in Brooklyn, son of Hilda and Abraham Bernstein, and went to Samuel J. Tilden High School — where he won all-city honors in football for playing both offense and defense — then Brooklyn College, before serving in the U.S. Army as a demolitions expert in Germany during the Korean War. He married the former Miriam Yellin on a weekend leave, a union that would last for 61 years. Bernstein started his career in fashion at the department store Russek’s. Next, he went to work at the buying office Advance, then became a coat-and-suit buyer for the Van Buren buying office, where he remained for a number of years before becoming apparel merchandise manager for the May Department Stores’ New York buying office, where he spent 18 months. “He had his own vision of what should be done, and found the best vehicle for executing that vision,” said his son Jeffrey, who is a lawyer. “He was a leader, not a follower.”

In 1968, Jerry Bernstein went into business with veteran Harry Hausen, creating the buying office Hausen Bernstein. In 1969, he told WWD, “We’re in an era of big business now. Even the small merchant has to think big to survive and be profitable. It’s our role in this industry to be the rabbits for our stores so we can outstrip the turtles — the big guys.”

After Hausen retired in 1975, Bernstein renamed the firm Jerry Bernstein Inc. Among his clients were the specialty stores Ruth Meyers in Nichols Hills, Okla.; Point of View in Shaker Heights, Ohio; Nobbson in Fort Wayne, Ind., and Handmoor in Chicago.

In 1987, Bernstein sold his business to The Doneger Group and became executive vice president of that firm. Later, he and his wife, known as Mimi, along with his youngest daughter Karen and son-in-law Ken Richter, launched a store called Mieka, which grew into six stores in Florida and Long Island.

Bernstein, an avid golfer, was active in charitable endeavors and was honored frequently by a number of organizations, among them the Joel Finkelstein Cancer Foundation, the Anti-Defamation League of B’nai B’rith, Yeshiva University and the AABC School for Blind and Retarded Children.

“On his very cluttered desk, he had a piece of paper under glass, a picture of a sailboat moored in a harbor with its sail wrapped up,” said Jeffrey. “The caption was, ‘If you’re not making waves, you’re standing still,’ and that’s the way he led his life. He was a mover and a shaker, but he was humble and giving.”

“He was very vibrant, very urbane, very full of life, and very sharp and funny,” said Linda Sherman, president of J’envie, a longtime friend. “He always knew the right trend. When my father passed away two years ago, I found two dollar bills signed by Jerry Bernstein wishing my father good luck. He had kept those bills his entire life. In the mid-Seventies, my father operated a very large company that went out of business, and Jerry was really instrumental in giving him business, because he knew he made a great product, and he gave my father a second chance.” Her father, Eli Goldstein, founded J’envie in 1978, and now Sherman carries the good-luck dollars in her wallet.

Bernstein is survived by his wife, Mimi; his three children, Bonnie, Jeffrey and Karen, and seven grandchildren. In lieu of flowers, donations can be sent to the Jewish National Fund.