She was known for her iconoclastic spirit and inventive knitwear designs. 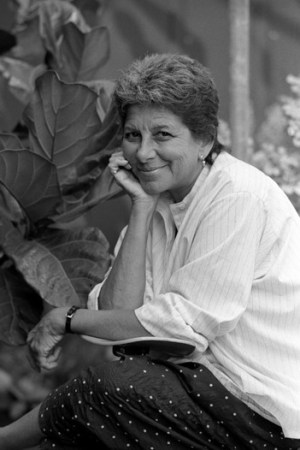 NEW YORK — Joan Vass, a designer known for her iconoclastic spirit and inventive knitwear designs, died Thursday at her Manhattan apartment. She was 85.

This story first appeared in the January 10, 2011 issue of WWD. Subscribe Today.

Vass had suffered a fall several weeks ago, and died in her sleep, said her daughter, Sara Vass.

Running her business with an unlisted phone number for many years, Vass nonetheless attracted an A-list clientele that included Ali MacGraw, Jacqueline Kennedy Onassis, Candice Bergen and Brooke Hayward. She was one of the first designers to set up shop out of her SoHo apartment, but then moved to West 25th Street and eventually to 105 East 29th Street. Although she was known to be demanding, Vass operated her business as “a family affair,” for which her daughter, Sara, ran public relations and her adopted son, Richard Mauro, ran her licensed business, Joan Vass U.S.A.

Born in Manhattan, Vass majored in philosophy at the University of Wisconsin in Madison, where she met her future husband, Gene Vass, an abstract painter and sculptor. After living in Rome, they returned to New York in the mid-to late Sixties and moved into a loft in SoHo. While working in the art world, she developed an interest in hand-knits and crochets and began selling knitted hats and mufflers in 1975 and, later, added sweaters. By April 1977, without financial backing, she launched Joan Vass Inc. and earned early support from Geraldine Stutz at Henri Bendel.

One of Vass’ signatures was that she made everything with selvage, and along the back of a jacket it would say, “100 percent cashmere.”

Demand for her quirky, unstructured knitwear increased throughout the Eighties, resulting in a production deal with Signal Knitting Mills in South Carolina under the label Joan Vass U.S.A., which encompassed sweaters, trousers, skirts and dresses using natural fibers and classic designs. In 2006, she signed a deal with Global Sourcing and Design Inc., which purchased the Vass name. It launched the Joan Vass Signature and Joan Vass Studio collections for spring 2007. Soon after, Vass closed her higher-priced Joan Vass N.Y. label. Gene Vass, who was divorced from Joan in the late Eighties, died in 1996.

Although Vass was a strong proponent of using domestic production for her U.S.A. line, she was vocal about the difficulties she had in getting designer-quality fabrics in the U.S. She told WWD in 1985: “Too many U.S. mills are afraid of change. They’re hostile to foreign mills, and they complain that we all buy abroad. But if they’d listen to what American designers want — better quality, better-priced goods — they’d get designer business.”

While Vass never became a household name, her sweaters were coveted by stores, private clients and editors.

Kim Hastreiter, editor in chief of Paper, said she owned a large collection of Vass sportswear. “I fell in love with her sweaters. She also made the best hats. She was difficult, but she was really smart and very acerbic,” she said.

Stan Herman, former president of the Council of Fashion Designers of America, recalled that Vass was a “vibrant member of the council. She was a questioner,” he recalled. “She was very much part of the politics of it, and I respected that.”

Mauro recalled that Vass “was always a bit of an outsider in the fashion world. She was a bit intellectual for the fashion community.”

Sara Vass said her mother read voraciously, everything from Jane Austen to James Joyce “and was very political.”

“She broke every rule of the business,” said her other son, Jason, an art dealer on the West Coast. He recalled trying to arrange a huge licensing deal for her so she could expand into a variety of products such as sunglasses, linens and sheets. They had a meeting on Park Avenue with a prospective licensee. “My mother rejected everything. She said, ‘I don’t like any of these people.’ I said to her, ‘It’s not personal, you don’t have to like them. You’ll have complete say and we’ll get 10 percent.’ My mother was never about the money.”

At their mother’s request, no funeral services are planned. She is survived by her three children.