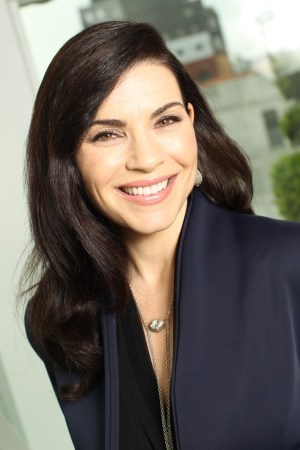 She may play a doting mom to her television son and daughter on CBS’ “The Good Wife,” but in real life Julianna Margulies has a far more practical view on parenting.

“I’d love to go back to the stage, but I don’t think I will until my son [four-year-old Kieran Lindsay Lieberthal] is in high school and doesn’t want me around on weekends,” Margulies said Wednesday at New York’s New Museum, where L’Oréal Paris revealed her as ambassador for its Women of Worth program.

“When I was single without a child, doing theater was awesome,” the eight-time Screen Actors’ Guild Award and two-time Emmy Award winner continues. “But to do a Saturday matinee, Saturday performance and Sunday matinee, I think is very hard on a family life. I hear that when [kids] become high schoolers they don’t want you around on the weekends so I figure by then I’ll be able to do that.”

Margulies, who during her show’s hiatus in April filmed “Stand Up Guys” with Al Pacino, Christopher Walken and Alan Arkin, says the experience was like “being in a master class” among acting greats.

Although she has “no director’s yearnings,” Margulies says she is very interested in producing, something that she has gotten to do on “The Good Wife.”

Her latest thoughts on the evolution of the show’s main characters?

“Honestly I think that Chris Noth’s character has actually taken the biggest turn of all,” she says. “It’s been really wonderful to watch his progression and it’s so interesting to see that he really does want to be good. He’s becoming the good husband.…I think he really wants her [Margulies’ Alicia Florrick] back.”

When asked if there is life after the hit series, the actress is buoyant.

“I always think there is a life as long as you are willing to work hard and find it,” she says. “I’ve promised my husband [Keith Lieberthal] and my son that if it belongs in television it will be cable and a half hour because they haven’t seen much of me in three years.”

Margulies, who also serves as the face of L’Oréal Paris’ RevitaLift skin care line, says she was drawn to the Women of Worth program after presenting an award to one of last year’s winners, Gretchen Holt Witt, who started Cookies for Kids’ Cancer to raise funding for pediatric cancer research after her late son Liam was diagnosed with the disease. Each year the program awards funding to 10 women across the country making a difference in their communities.

“These women were so extraordinary and exceptional and most of these women you’d hear their stories and think, that’s when you quit,” the actress says. “Instead they persevered and not only helped other women but changed their communities, changed medical research, helped other women get jobs.”

Karen Fondu, president of L’Oréal Paris, says the actress’ teaming with the cause makes for an “extremely special” combination. “She is a beautiful person inside and outside,” Fondu says of Margulies. To date, Women of Worth has honored 60 philanthropic women. Nominations for this year’s program will run through May 31 and can be made at womenofworth.com.