By Amanda Kaiser
with contributions from Tiffany Ap
on June 17, 2015
View Slideshow 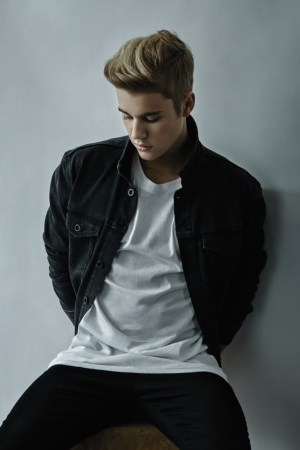 Former Hermès CEO Patrick Thomas to Join Board of Richemont

‘Is he a model or is he singer?” Justin Bieber needles members of his entourage during a photo shoot as he glances at images of himself on a computer screen.

That’s a question that the pop star — and his fans — may be asking themselves more and more frequently. Bieber, who just turned 21 in March, says music remains his top priority, but it is very clear that fashion is becoming an increasingly important part of his persona. He just flexed his well-toned muscles for Calvin Klein’s underwear and jeans campaigns — and the brand flew him to Hong Kong to perform at a cruise terminal and anchor a brand event. This spring, he cut a stylish figure at the Met Gala, sporting a gold-embroidered Balmain jacket with the brand’s designer Olivier Rousteing — Bieber said the two are such good friends that they hear from each other on an almost weekly basis. Meanwhile, he is gearing up to make a cameo appearance in the hotly anticipated “Zoolander 2.” Finally, the musician says it’s only a matter of time before he designs his own men’s brand of fashion and streetwear.

“Just being recognized by the fashion world in such a way so far has been awesome,” says an upbeat Bieber, smacking on blue gum during an interview on the 15th floor of The Landmark Mandarin Oriental just hours before his performance at the Calvin Klein event. “I’m excited to venture into a new lane….Really new and something I’ve always really liked, but now I’m just moving forward into that direction.”

Zipping into the hotel suite on an IO Hawk, a mobility device similar to a Segway without the handle, Bieber acknowledges that fashion — specifically the Calvin Klein campaign — is helping him transform his image as he enters adulthood. The Canadian singer calls the black-and-white Calvin Klein ads with Lara Stone a “transitioning tool.” The sexually charged images recall the brand’s iconic 1992 campaign with Mark Wahlberg, aka Marky Mark, and Kate Moss.

Bieber does give off something of a transitional vibe, of someone still coming to terms with adulthood and his own maturity — and how to handle it. During the interview, he speaks softly — at times just above a whisper — and earnestly. He seems like a guy who has been instructed to choose his words carefully.

Then there’s the flip side. Later that night, a large crowd of cheering and screaming fans greeted the singer as he arrived at the venue, a ferry terminal and former airport along the Kowloon waterfront. Bieber plays a longer-than-anticipated set including “Where Are Ü Now,” a new single he recorded with DJ trap/dance duo Skrillex and Diplo, an acoustic version of Tracy Chapman’s “Fast Car” and some of his older hits like “Baby” and “Boyfriend.” He also unleashes a few doses of attitude. “Don’t f–k with my levels,” he snipes at a sound producer in the middle of a song. At another point, he abruptly asks photographers to put their cameras away: “It’s annoying.”

Bieber has had his share of legal issues and run-ins with the law over the past few years — most notably a 2014 charge of driving under the influence that was settled via plea bargain. While he doesn’t discuss any incidents specifically, he does address what seems to be the constant drama surrounding him in more general terms.

“I don’t think anyone has really doubted my musical capability and that’s what has sustained me this long, through all the negative stuff that’s been portrayed of me,” Bieber says.

“People wanted me to apologize, which I don’t know if it’s really fair. I’ll definitely take responsibility…as I’m growing but I’ll never apologize for being human and making mistakes,” he says. “I think that that’s just part of growing and living and becoming a man or a woman. It’s been a cool learning process. I’m really happy where I am right now, that’s for sure…take a second to, like, step back and evaluate the situation and think, OK, that might not be true, or just give me the benefit of the doubt. That’s all I ask.”

As he attempts to put forth a more adult image, Bieber’s style and fashion knowledge are evolving. The star says he has developed a new appreciation for things like styling and fabric quality.

In terms of Bieber’s current style, the singer says he is “really into, like, drapy things, drapy sweaters, layering pieces.” As for his favorite brands, he gives Calvin Klein a predictable name-check before mentioning Balmain and Jerry Lorenzo’s Fear of God.

Given that enthusiastic banter, it’s no surprise that Bieber is thinking about launching his own fashion brand at some stage — he actually said as much during a WWD interview in 2011. But he stresses that he is not in any rush to jump on the celebrity fashion bandwagon — and expressed a rather humble reason why.

“I haven’t lost that passion. It’s just such a big deal….I just want to make sure it’s perfect and right and take my time with it. I know Kanye [West] has been working on his stuff for years and failed and came back and tried again and failed. It’s about trial and error and I don’t know if I’m ready for that yet,” he says. “Fashion’s definitely really important, but I got to make sure I’m ready for the failing part of it because I know that comes with it. It’s not easy. It’s not like putting out an album.”

Doing just that — putting out an album — is Bieber’s focus for the moment. The singer has not released an album since 2013’s “Journals.” Bieber says he is working with a host of collaborators, including the aforementioned West and Skrillex and Diplo. A release date has not been set.

“You’ll find yourself in the studio for months at a time and find nothing and then all of the sudden it’s like bang, bang, bang and you get [ideas] like one after the other,” he says. “Finally you get in a rhythm and a motion, and I feel like that’s where I’m at, just kind of finally collecting all of the songs that I want to come out.”

Growing up under public scrutiny definitely poses its challenges — perhaps that is why Bieber seems to feel so passionately about the pitfalls of social media and the damaging effects of bullying. “It’s all perception of how you take it in…if you, like, get satisfaction from the love, you’re gonna die by the hate,” he says. “[I] use it like a platform for me to reach out to people and that’s it. Not use it for validation or something like that.”

He adds that technology creates an especially tough environment for kids today. “I think that’s what’s ruining the younger generation is they feel so judged and they have to be some sort of way,” he says. “I just believe that’s discouraging a lot of kids and I want to help [with] that in any way I can.”

That motivation is what prompted Bieber to invest in Shots, a year-and-a-half-old selfie app that strives to create a cyber-bully-free environment because there are no comments or like-dislike features.

Bieber himself is gearing up for a new level of exposure with his upcoming turn in “Zoolander 2,” his first acting role.

“I start the movie off. The first thing you see in the movie, which is pretty cool. I do this whole, like, parkour sequence,” he says. “I’ve never really done something like that before. I didn’t expect Ben [Stiller] to be so hands on….It was really cool to have him direct me in such a nonthreatening way. I wasn’t intimated at all.”