It will be sold in 700 Sears stores starting today. 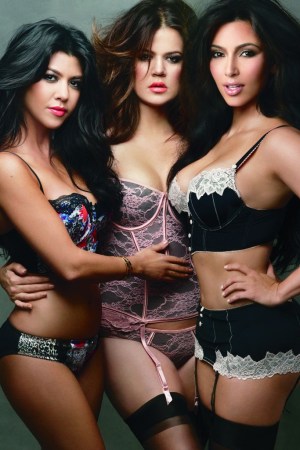 This story first appeared in the September 6, 2011 issue of WWD. Subscribe Today.

“We’ve been trying to bring in different national brands and exclusive brands as well as celebrity brands. Over the past year, we’ve opened our San Francisco office and began reinventing Sears apparel, which has been a very big task,” said Goodman. “We did a soft launch in September with a pre-sell of the Kardashian Kollection.…The prelaunch was very successful and key items sold out in a week and a half.”

Goodman noted that all product categories will be housed in dedicated Kardashian Kollection shop-in-shop environments in 400 Sears doors, while an additional 300 units will showcase “elements of the collection.”

“We feel this will change the look of Sears in a very positive way. Sears is known more for its hard line business but we are becoming a player in apparel again,” said Goodman.

Sears teamed with Australia-based Jupi International, headed by entrepreneur Bruno Schiavi, and the Kardashian sisters on the collaboration for which the Kardashians have final product approval.

Schiavi said a winning formula for the collection is a range of intimates and ready-to-wear that can be mixed and matched.

“We wanted to create a high-end look at a very affordable price, creating looks that are visually appealing such as mixing a corset with leggings,” said Schiavi. “We wanted to create a collection accessible to all shapes and sizes and nationalities. Everything created is done by the girls from start to finish…and the girls love lingerie.”

From the Kardashian perspective, Kim said she and her sisters “worked really hard to create an incredible, price-friendly collection.”

“We are so excited to see our fans’ reactions to the designs,” said Kim.

Khloe added, “It was really important to us to design looks for girls everywhere, no matter their signature style.”

Kourtney described the ability to reach consumers in mainstream America as “phenomenal.”

The celebrity cachet of the Kardashian name paired with trend-right product is expected to draw a new, hipper customer to Sears, according to Goodman.

“The [Kardashian] girls appeal to a multicultural base and they have a wide profile.…It’s about the style they have. They really have a multicultural following. People follow them on Twitter, Facebook and their show, ‘Keeping up with the Kardashians,’ and Kim’s wedding,” said Goodman. “We’re looking at getting a new customer into the Sears stores that we’ve never had before. It’s aimed at the 25-plus [age] range but it’s more about an attitude — it can go higher than 25 or lower.”

Meanwhile, a national print and TV ad campaign breaks today to coincide with the launch for which “Good Morning America” will air a segment with the Kardashians on Wednesday. The print campaign, photographed by Annie Liebovitz, features the Kardashian sisters in sultry looking black and animal-print apparel and provocative lingerie. TV commercials will focus on behind-the-scenes vignettes. A launch party for the collection will be staged today at Liebovitz’s studio in New York’s Meatpacking District, where the Kardashian sisters will make an appearance.