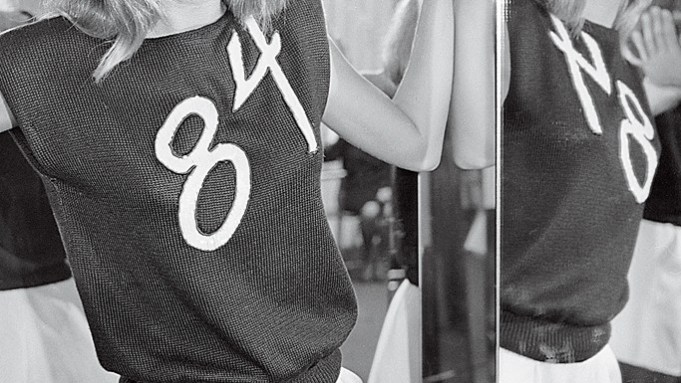 1980 At 17, Kathy is discovered by Elite models. She signs in 1981. She would appear on covers for Vogue, Cosmopolitan, Women’s Fitness and other magazines, and in campaigns including Bulova, Fruit of the Loom, Caress Soap, Budweiser, Cheerios and Baked Lays Potato Chips.

1984 First of 13 consecutive appearances in the Sports Illustrated Swimsuit issue, with three times on the cover.

1989 Kathy is on the cover of the Sports Illustrated Swimsuit issue, which remains the magazine’s best-selling swimsuit issue.

1992 Ireland turns down modeling assignments and a series regular role on “Baywatch.” She takes a $50,000 personal loan to start her company, Kathy Ireland Worldwide, and hires Jon Carrasco from Sterling Winters to serve as creative director. She would buy Sterling Winters in 2001.

1993 Partners with Moretz Sports and the KIWW brand launches with a pair of athletic socks that she designs, using moisture-wicking technology. KIWW accepts an offer from Kmart to sell apparel on a non-exclusive basis.

Her philanthropic efforts kick into high gear, as she becomes the founding ambassador to the Dream Foundation, which grants wishes to terminally ill adults; she begins HIV/AIDS activism working for AIDS LA.

1996 KIWW launches its Web site, kathyireland.com with the decision not to sell product but to use it as a broadcast/informational channel.

She signs a contract to launch home goods at independent retailers.

1999 Home products are purchased by the Nebraska Furniture Mart (a Berkshire Hathaway company) which remains a major account.

Ireland is named Woman of the Year from the National Association of Women Business  Owners.

2000 Ireland becomes the first female and first designer to host the LGPA Tournament. It is the first of three she will host. She launches a golfwear collection.

The company produces “Once Upon A Christmas,” which is now syndicated annually in more than 80 countries and was the highest rated made-for-TV movie on the ABC Family Channel.

“Twice Upon Christmas” premieres at the White House with First Lady Laura Bush.

2002 Ireland becomes Ambassador of Hope for City of Hope. She releases her book “Powerful Inspirations: Eight Lessons That Will Change Your Life.”

After Kmart emerges from bankruptcy, KIWW parts ways with the retailer and launches home products in independent distribution channels. It licenses the Alta division of Hunter Douglas for custom window coverings and Martin for home and office furniture.

Ireland begins a program to establish home-based businesses for single parents. She is named Mother of the Year by the National Mothers Day Association.

Ireland is the highest-ranked woman, ahead of Oprah Winfrey, on Inc. magazine’s list of Top 10 Celebrity Entrepreneurs.

2006 KIWW partners with Hallmart for bedding.

2009 KIWW makes License Global Magazine’s list of the most powerful licensing brands in the world. During this year, it licenses cabinets, fine jewelry, home shelving, bedroom and dining room furniture.

Ireland publishes her fifth book, “Real Solutions for Busy Moms: Your Guide to Success & Sanity,” in English and Spanish.

Ireland hosts the Oscars Red Carpet on ABC to the highest ratings in history wearing jewelry designed by Elizabeth Taylor and from her own collection.

She receives the Lifetime Achievement award from the CEO Roundtable, a Humanitarian Award from Jewelers for Children and becomes the Ambassador for the Make a Wish foundation.

2011 KIWW licenses furs with American Legend and launches a best selling designer collection from the Fur Vault at Macy’s; partners with Bauhaus, a  La-Z-Boy company, for upholstery, and Lloyds of Chatham for additional upholstery. She signs with Panties Plus for intimate apparel and launches Kathy Ireland for Mon Cheri bridals.

Chef Andre contributes recipes to Janet Jackson’s New York Times Bestseller “True You.”
Nicholas Walker is the centerpiece of the Architectural Digest tribute to Elizabeth Taylor for designing the Elizabeth Taylor Garden, and Ireland receives the Design For Life award for battling HIV/AIDS.

2012 Marking 20 years since planting the seeds of KIWW, Ireland’s bridal collection is named the exclusive designer for the Festival of Brides at Disneyland.

The company will announce its partnership with Gorham, a Lennox company, for fine table glassware and flatware.

Ireland is slated to address Googleplex as a keynote speaker.