Beginning with two employees, Kenar grew into a $75 million apparel company known as much for its provocative advertising campaigns as for its sportswear.

By Lisa Lockwood and Rosemary Feitelberg on June 27, 2014
View Slideshow 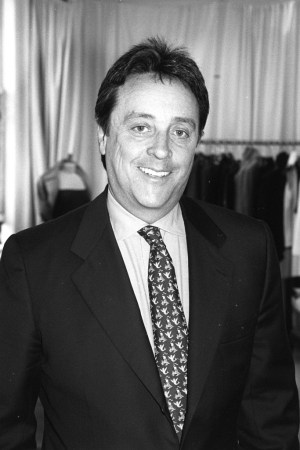 NEW YORK — Services will be held today for Kenneth Zimmerman, 63, cofounder of Kenar Enterprises Ltd., who died Wednesday at his Edgewater, N.J. home.

The cause of death was a brief illness resulting in heart failure, according to his son, Zachary.

Born in Brookyn, N.Y., Zimmerman graduated from the University of Miami in 1972 with a bachelor’s in business administration. He began his career at Henry Fredericks Inc. and Puritan Fashions before teaming with Murray Levy to start Kenar (named after Ken and his wife Arlene) in 1976.

Beginning with two employees, Kenar grew into a $75 million women’s apparel company, known as much for its provocative advertising campaigns using supermodels such as Linda Evangelista, Helena Christensen, Claudia Schiffer and Naomi Campbell as for its sportswear. Created by Laspata DeCaro, the ads were featured in fashion magazines and on billboards throughout the country. One prominent billboard was in New York at One Times Square, where the Kenar ads appeared under the Sony TV screen for 10 years.

After Levy died in 1989, Zimmerman became the sole owner of Kenar.

One of Kenar’s more controversial ads was a 1992 campaign that featured Evangelista seated with a group of seven Sicilian ladies and one empty chair, representing a family in mourning, having lost a member to AIDS. Rocco Laspata photographed the campaign in Savoca, the Sicilian town where Francis Ford Coppola shot “The Godfather.” They found a church and asked women who were coming out of mass to participate in the campaign for a small fee and a donation to the parish. After the ad ran, Richard Johnson of the New York Post called it “Beauty and the Seven Beasts,” which started a firestorm. According to press reports, New York’s Italian-American community complained that the ad promoted stereotypes by depicting the Sicilian women as frumpy. Limited-edition photographs of the Kenar ad were sold for $1,000 apiece, with proceeds going to an AIDS education group. The International Center for Photography has included it as one of the “20 most important fashion photographs.”

Another eye-catching Kenar campaign featured Christensen in the forest, completely naked except for a strategically placed banana leaf. Zimmerman approved the image and wanted to use it on a billboard in Times Square. The billboard went up in December 1993. As it turned out, it was a frigid winter, and whenever TV news cameras panned across Times Square, there was the famous tropical photo. “This was one time where the client wanted to push it more than the agency,” recalled Laspata.

An early advocate of the fashion industry’s philanthropic efforts, Zimmerman approached Evelyn Lauder to support her Breast Cancer Research Foundation in 1995. In October of that year, he dedicated Kenar’s billboards nationwide, including its Times Square billboard to an image of Evangelista holding her breast with BCRF information. During that time, Zimmerman sold Kenar umbrellas and polo dresses with the BCRF pink ribbon insignia, donating all of the proceeds to BCRF. For Kenar’s Madison Avenue store opening that same year, Evangelista and Elizabeth Hurley, a major BCRF supporter, cut a pink ribbon with New York City Mayor Rudy Giuliani.

“The genesis of our career is all due to Kenar,” said Charles DeCaro on Thursday. “When he [Zimmerman] believed in you, he gave you carte blanche to run with your creative ideas.”

Kenar closed the business in 1998 after filing for bankruptcy and sold the label to Garfield & Marks, which is owned by The Pegasus Fund in Greenwich, Conn. During his tenure at Kenar, Zimmerman purchased and rebuilt such labels as Schrader, A.J Bari and St. Gillian.

Besides Zachary and his wife Arlene, Zimmerman is survived by another son Ryan; daughter Nicole, and two grandchildren. His eldest son, Matthew, predeceased him in 2012.

Services will be held at 9 a.m. at Gutterman Musicant in Hackensack, N.J.