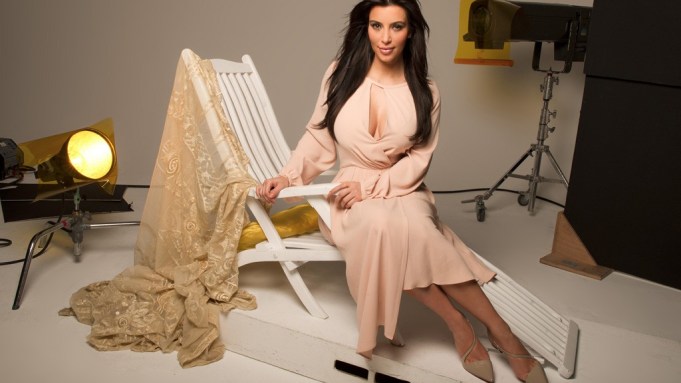 The pregnant reality phenom Kim Kardashian blew into the City of Light last week in her typical fashion to attend her pal Stéphane Rolland’s couture show; accompany her fellow K boyfriend Kanye West, who’s recording an album, and pose in an advertising campaign for her sixth fragrance, Pure Honey.

Right now is considered “off time,” since she’s not filming her TV show in Los Angeles until later this month. However, such days are still chockablock. Kardashian wrapped the Tyler Perry movie “Temptation,” which comes out in March and in which she plays a marriage counselor, for instance.

“My character is pretty light throughout the film, so it’s fun,” she says. “It was interesting to work with people that I’ve liked for so long, and just to work with Tyler Perry was amazing and such a good experience.”

Kardashian is also to shoot her Sears ad campaign and make an appearance for her new fragrance.

“I definitely do see myself branching off and maybe doing a sitcom or something other than reality,” she says, adding while that’s been in talks, it “is nothing serious yet.”

A dream would be to work on hair or skin care.

Then there is the matter of her pregnancy. For a woman who has built her fame on revealing almost every aspect of her life on reality TV — and to the press — the surprise is that she doesn’t want her baby to be part of the circus. But keeping it out of the public eye won’t be easy in the 24/7 World of the Kardashians — not to mention Kanye.

“When you go places, there are paparazzi and cameras; you can only do so much to avoid it,” she explains, sitting in a photo studio in northern Paris. “But I can do what I can to just not have my child on TV.”

During the discussion, plates of food have been piled in front of Kardashian. “I did not order this stuff, I swear,” she says with a laugh.

Yet Kardashian has no complaints about the bounty of professional and personal projects on her agenda.

“My plate is so full right now that I feel really content,” she says. “It’s one time when I’m actually like, ‘Let me scale down actually a little bit.’”

As for her fragrance, the prestige women’s eau de parfum, created with Kardashian’s fragrance licensee Lighthouse Beauty Marketing, is due out worldwide starting in September.

“This one to me represents pure femininity; it’s really warm and inviting,” she says. The place is bustling with the likes of photographer Nick Knight, makeup artist Val Garland and hairstylist Sam McKnight on hand for her campaign.

“I am super involved from start to finish — on bottle design to ad campaign. I had this really great honey idea, so we moved away from just florals,” she explains.

For the ad, Kardashian had in mind a “soft, beautiful concept,” and for the flacon, “I wanted to make sure that it had the little bee on it,” she said.

The 50-ml. version will retail for $55 and the 100-ml. edition for $68 in the U.S., where it is to be carried in Lord & Taylor and Belk. (Industry sources estimate Pure Honey will generate $5 million in retail sales during its first five months globally.)

“So what we try to do is reach that broad marketplace by having some of her brands live at prestige while some live at mass,” he says.

A long-standing fragrance aficionado, Kardashian has a huge stash at home, including scents her father would buy on trips and “intricate” bottles collected from her own visits to the Middle East.

She adds, “Everywhere I go I pretty much pick up a fragrance.”

That said, her condition means she has to be discerning about what scent she wears, since pregnancy changed her sense of smell. Today she sports her label’s Glam, which is light.

“I find that one works for me,” she says.