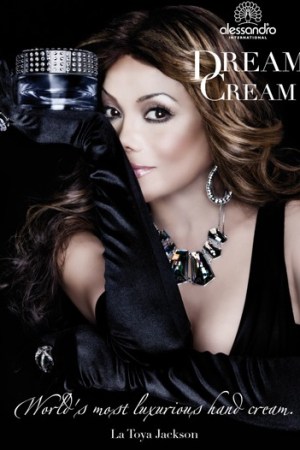 Dream Cream, created by Alessandro’s founder and managing director, Silvia Troska, at the request of Jackson, promises the best of technology, a special scent and some pretty packaging, too. The 100-ml. cream comes in a container topped with 285 Crystallized-Swarovski Elements intended as a showpiece for the bathroom or boudoir, and is priced at 169 euros, or $226.69 at current exchange. It has a rich, soft texture, and is designed to endure multiple hand washings.

This story first appeared in the March 31, 2010 issue of WWD. Subscribe Today.

Some 1,500 jars will be carried at Alessandro salons and counters.

The vanilla, sweet almond and patchouli-scented cream contains diamond powder, malachite, shea butter, peptides and more; it’s Alessandro’s first high-end, luxury product. The project was sparked by a meeting between Jackson and Troska at an event in Munich, when Jackson complained to the hand care expert that all the creams and lotions she tried never seemed to last.

“She did better than what I expected because she put diamond dust in it which is even better,” said Jackson of the final product. “It’s a very luxurious feeling, it’s very satiny.”

And Jackson, who appears in a visual for the product, was an active partner in the six-month development process, according to Troska. “La Toya kept me [focused] on the product,” Troska said. “She called me at 3 a.m., took me out of my bed, because she wanted to talk about the samples that I sent to her. So she’s very tough!”

Still, the working relationship was smooth, and the partners were on the same page in what Jackson described as “a very easy marriage.”

Troska is also looking into opening an Alessandro salon on Rodeo Drive in Beverly Hills, with input from Jackson. “We were saying in L.A. [that] they don’t have elegant nail shops. Women pamper themselves in L.A., but there’s not an elegant place to do it in.” said Jackson.

“So, there’s a lot of potential there,” agreed Troska, who got the idea for her nail salon concept for Germany 30 years ago after seeing manicure and pedicure shops on a visit to Los Angeles.

Along with the star power, the nail, skin care and cosmetics brand pulled out all the stops at Beauty International, presenting the largest booth on site at 5,382 square feet, staffed by 80 workers, including a lounge, counters for nail services and a sizable shopping area.

Beauty Brands International, which picked up distribution for Alessandro in its top market Germany, as well as in Austria and the Netherlands in September 2009, was behind the big push for the brand.

At the fair, Alessandro also introduced its new 11-item Studio Line of hand and nail care products. The range, priced 20 percent below Alessandro’s other offerings, will be positioned as an entry-level line, and will only be carried in Alessandro’s nail studios.

Langenfeld, Germany-based Alessandro International exports products to more than 50 countries, including Canada, Brazil, Dubai, Australia and South Korea, as well as around Europe. Products are carried in department stores, perfumeries and in the company’s 2,500 salons, which also offer nail services, waxing, and massage.

In Germany, the Alessandro brand is carried at 800 perfumeries and at 3,200 salons and counters.