Lady Gaga’s Message in a Bottle

The singer's personal appearance at Macy’s Herald Square on Friday marked her second grand entrance in as many days. 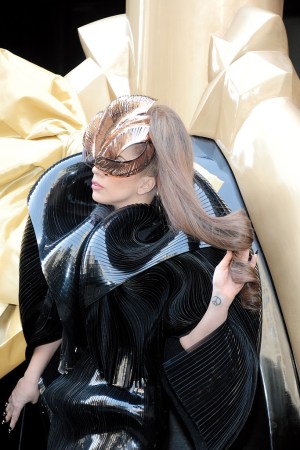 In her second grand entrance in two days, Lady Gaga arrived at her Macy’s Herald Square personal appearance Friday afternoon in a giant replica of her Lady Gaga Fame fragrance bottle drawn by a horse and carriage. As she stood amidst a horde of screaming fans, she posed in a bronze headpiece, black bondagewear and sky-high black platforms adorned with the little metal men she wears in the fragrance ad before heading in to greet 250 waiting fans who’d purchased fragrance sets earlier in the week.

She wasn’t speaking to the press at Macy’s, but on Thursday Gaga had plenty to say in an interview at Manhattan’s Mandarin Oriental. And despite the fact that her new scent with Coty is selling briskly, don’t expect her to be the run-of-the-mill celebrity bubbling forth on what a “perfect fragrance this is.”

Wearing a Mordekai gold crown and a salmon-and-black Basil Soda dress that appeared to be made of hair, she swept into a 50th-floor room. Waving the daggerlike black-and-gold fingernails she explains were inspired by the fragrance, she opines: “I don’t think it really matters how it smells. I’m not trying to be funny, but I guess what I’m trying to say is that in the celebrity fragrance world, you’re buying a fragrance because you like the celebrity. So the challenge for me was to say that I’m going to create something that I think you would love if you didn’t like me. [Also,] it’s a nice and expensive way for Steven Klein and Nick Knight to take a big p–s on commercialism. Truly, this was just a really exciting experiment with me and some friends of mine that I have viewed as artistic heroes since I was very young. This is not me in the bottle — it’s an expression of me and my relationship to fame as a performer. The darkness stays inside the bottle, and out comes only the beautiful parts of Fame.”

Gaga explains that Klein and Knight have long been her artistic heroes. “So this is pivotal for me not as a project release, but it is a way to celebrate two of the greatest heroes in photography and art,” she says. “It makes me want to be a better artist for them. They’re pushing me every day to reach my full potential.”

The entertainer is proud to have created a black scent. “I like black because it is a vacant space,” she says. “But I’ve also been into white quite recently, actually, with my new music and ‘Artpop.’ So, you know, I have to have both to survive. I wanted it to be black, so I started thinking about the duality of meaning, which is something I always toy with in my music, and I thought that the name Fame would be good, because people would recognize that it’s something that is associated with me. But it’s also quite funny because it’s quite Warhol-ian and I don’t really give a s–t about perfume. That’s sort of the point of it. I wanted to only create a great perfume, not any perfume that would sell, but a great artistic one that the fans would not feel cheated by. You should feel like you’re buying something that is as amazing as when you go to Chanel or when you go to Yves Saint Laurent. You shouldn’t have to have money to have a luxury fragrance.”

And there’s a big sexual undertone, she says. “This one in particular is very seductive. This is a very sexual fragrance. This is for the woman that wants to get laid, to be totally honest. That is what fame is, isn’t it? To get the world to fall in love with you. You want everyone to want to f–k you. Put it in a bottle, and I’m selling it.”

For those who were worried about certain bodily fluids, never fear. Of her oft-quoted reference to wanting her scent to smell like blood and semen, Gaga admits, “I always say stuff like that to rattle people’s cages, you know? I do it all the time.” Later, though, she notes, “I probably will use that [blood note] at some point, because it actually smelled quite good — but ultimately, the concept of Fame with this black fragrance to me was the most important thing. I wanted there to be an explosive quality about this scent. When you first smell it, it’s a bit overwhelming. But just let it settle for a moment. It’s like a good pop song — you turn the radio on and ‘aaaaahhh! It’s really loud!’ but then you’re like, ‘I know this one; it’s really good.’ I wanted it to be instantly addictive and instantly overbearing — kind of like me.” Gaga is said to currently be working on a second scent, which could launch in fall 2013.

Fans attending Gaga’s Guggenheim launch party for Lady Gaga Fame were required to wear masks and hats. What would she like to hide behind a mask?

“Everything,” she says. “Why not? Aren’t we all insecure about things? I feel sorry for everyone else who’s running around without a hat or a veil on, feeling terrible. I mean, honestly, there are days when I just don’t want to be seen, so I put a veil on. I put a hat on. I have my burka. It’s because I don’t want you to see my makeup-less, tired face today, or because I quite like it and I don’t think my face is more important than my hats, to be honest. Everybody sees different things.”

Gaga definitely sees the world — and fashion — through a different lens than many. She noted that inspirations for her much-talked about looks — including the infamous meat dress — “all come from separate places.”

Ultimately, though, most come from happy moods. “When I’m happy, I’m at my best. When I’m confident and happy, I’m my most eccentric, because I’m celebrating fashion and life. If you see me dressed a little bit more plain, or maybe a lot of leather, it means I’m probably sad — or shoegazing.”

She attributes cutting down on alcohol as one of the factors buoying her mood lately. “I haven’t completely given up drinking, but I’ve given it up a lot,” she says. “And it’s made me a much happier person. I’m happy all the time.”