The French beauty giant’s board of directors said today that 89-year-old Bettencourt’s grandson Jean-Victor Meyers would take her seat. 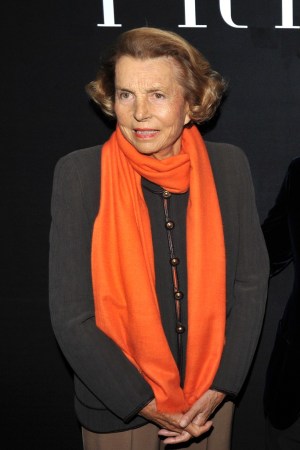 PARIS — Liliane Bettencourt has passed the L’Oréal torch to the next generation.

In reporting an 8.9 percent increase in net profits for 2011, the world’s largest beauty company said Monday that the 89-year-old Bettencourt would step down from the board and her seat would be taken by her 25-year-old grandson, Jean-Victor Meyers. The move will be submitted for approval at the next annual general meeting of shareholders. The Bettencourt family is the largest single shareholder in L’Oréal, with a 31 percent stake.

Twenty-five-year-old Meyers is a son of Bettencourt’s daughter, Françoise Bettencourt Meyers, and also Bettencourt’s legal guardian. He studied economics and management in France and the U.S. Over the past two years, Jean-Victor Meyers spent some months at L’Oréal. He’s also been a member of the supervisory board of the Bettencourt family’s holding company, Téthys, since January 2011.

Jean-Victor Meyers joining L’Oréal’s board marks another chapter in what has been a long-running saga of the Bettencourts involving vast wealth, family feuds, lawsuits and political scandal. The announcement about her leaving the board followed numerous lawsuits concerning Bettencourt’s mental acuity. Most recently, on Jan. 18, a French court turned down Bettencourt’s request to have her guardianship status changed to “reinforced guardianship,” which is less restrictive. She had appealed a decision made in mid-October by the guardianship judge of Courbevoie, France, who had placed her under the protection of Meyers. At the time, Bettencourt’s holdings were put under his guardianship, plus that of her daughter and other grandson, Nicolas Meyers.

That legal decision had been long in the making, coming after numerous requests for guardianship protection made by Bettencourt Meyers during the Bettencourt affair, which began in December 2007 when she brought a lawsuit against photographer François-Marie Banier. She alleged Banier exploited the weakness of Bettencourt, who gave him assets valued at about 1 billion euros, or $1.32 billion at current exchange.

In December 2010, the family part of the saga, which had boiled into an affair of state as well, abruptly ended when the mother and daughter reconciled. But less than a year later, tension between the duo heated up again. Bettencourt Meyers believed her mother remained prey to people looking to profit from her alleged ill health.

Bettencourt Meyers and her children have long maintained their support for L’Oréal, whose second-largest shareholder is Nestlé.

Jean-Paul Agon, L’Oréal’s chairman and chief executive, stated that Bettencourt’s “dedication and personal support given to L’Oréal, her entrepreneurial spirit, her curiosity about new modern trends relevant to our business, are not only exceptional but also demonstrate her deep attachment to this group and its continuity in the face of a changing world. Her unrelenting support to the managers of the group, to its development and international success has been exemplary and valuable.

“Her participation as board director was a permanent encouragement to pursue [the work of her father, L’Oréal founder Eugène Schueller] to grow the company, first and foremost in its quest for excellence, its demand for high standards and pertinent decisions in the respect of the men and women of this company,” continued Agon. “We know that Madame Bettencourt’s interest for the group remains strong, and that she will continue to support its development going forward.”

Agon stated that 2011 “was a solid year of development, which has made the group even stronger.

“All divisions are expanding,” he added. “L’Oréal Luxury in particular posted a very good year, especially thanks to Lancôme, Giorgio Armani and Kiehl’s. Internationalization is continuing across all divisions. The group is pursuing its conquest of the new markets, with Asia and Latin America leading the way, and is making clear progress in North America.”

Agon further explained “2011 was also another year of solid construction for our operating profit,” which was 3.29 billion euros, or $4.59 billion, representing 16.2 percent of company sales. (In the prior year, it corresponded to 15.7 percent of the firm’s revenues.)

Dollar figures were converted from the euro at the average exchange rate for the period to which they refer.

Agon foresees sales and profits increases in 2012, which he called “a symbolic year, as the new markets are set to become the group’s number-one geographic zone.”