The legendary owner of Louis Boston died Sunday at his home in Santa Fe, N.M. He was 84. 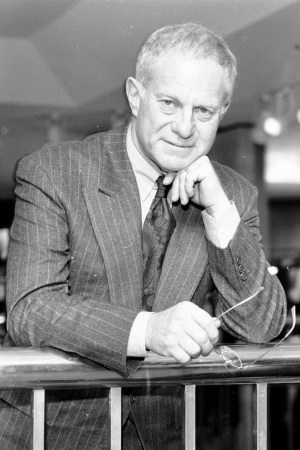 A retailer’s retailer, a visionary, an innate merchant with an inimitable sense of style.

Those were just a few of the expressions used to describe Murray Pearlstein, the legendary owner of Louis Boston, who died Sunday of dementia at his home in Santa Fe, N.M. He was 84.

This story first appeared in the April 23, 2013 issue of WWD. Subscribe Today.

Pearlstein was opinionated, feisty and often controversial, but he was also the man who built a landmark specialty store that was among the first to bring European designers to America in the Sixties and one of a handful of merchants credited with transforming the men’s wear industry.

“Murray Pearlstein was one of the leading creative minds of the men’s specialty store world,” said Ralph Lauren. “He had his own design philosophy that shaped his store and its products. He had a voice and that voice was Louis Boston.”

Joseph Abboud, a Boston native who spent 12 years working for Louis part time as a salesman during college and then as a buyer, said: “He was one of the giants in the men’s wear industry with Fred Pressman [of Barneys New York] and Cliff Grodd [of Paul Stuart]. They were the three merchant princes. They were larger than life and marked an amazing, special age in our industry.”

Abboud recalled the first time he saw Pearlstein. He was 17 years old and window shopping at Louis for a tie to wear to the prom. “I saw this man yelling at the window dresser. He was wearing a melton wool blazer and a Pierre Cardin hat. That was Murray. He was a rough guy, but he had style. He was the Steve McQueen of our industry.”

Abboud said that after his parents died, Pearlstein and his wife took him in. “He was like a father to me and he was respected by everybody. The Italians genuflected when he went by.” And even though it was a comparatively small store, Abboud said the orders he placed were substantial. “He said if you believe in something, buy it like you believe in it. Without focus groups or anything like that, Murray just had raw instinct and talent.”

Ron Frasch, president and chief merchant of Saks Fifth Avenue, said: “Murray Pearlstein will be deeply missed. He is an inspiration for the way we buy today, had a strong point of view about how his business ran and never compromised his views. He spent time gathering the right European designers and mixed them well with important American brands. Murray also took risks on the younger generation, bringing new eyeballs to his store. The power of offering a compelling mix of merchandise for different types of consumers with a distinct point of view is key to Saks’ success and something Murray really pioneered.”

“He was an icon and a giant,” said Jack Mitchell, chief executive officer of Mitchells Family of Stores. “When I first came into the business, my first thought was to go to Louis of Boston. He was always innovating, always changing and always talking about product and fashion.”

His son, Bob Mitchell, copresident of Mitchells, added: “Growing up in this business I always idolized Murray Pearlstein and what Louis represented. I always made special trips to Boston to see Louis and to have Murray give me his passionate, direct viewpoint. I will forever remember Murray as a visionary and pioneer in our business.”

Richard Cohen, senior vice president of business development for Saks Fifth Avenue, who was ceo of Ermenegildo Zegna’s U.S. business, called Pearlstein “the ultimate merchant in men’s wear. He had a taste level and a point of view that communicated to Americans what Europe really was.” He said Pearlstein was the “cornerstone” that helped build the Zegna business in the U.S. “He understood the styling and creativity of Europe and challenged American consumers to wear it. He was before his time, but he’s been proven right.”

Although Pearlstein was viewed as a superior merchant, he could also be tough as nails. Abboud said he was a “tough boss. There were times when I thought I just couldn’t take it anymore, and I’d have to go out and take a walk around the block to cool off.”

Cohen laughed when he recalled Pearlstein’s prickly side: “Our industry lacks personality, and Murray, along with being a creative genius, was high maintenance. And that’s OK.”

Joe Barrato, former U.S. ceo of Brioni, said: “Murray was a true innovator and supreme visionary merchant. His passion for what he believed always labeled him outspoken, and he missed no opportunity to express his point of view. I considered him a friend and mentor, and he was always generous to me with his advice and insights. He was one of a handful of stores responsible for supporting and developing the luxury Italian statement.”

Gene Pressman, son of Fred Pressman and former ceo of Barneys New York, said Pearlstein was “an excellent merchant. We were in different markets, but he was a contemporary of my dad’s and they had a mutual admiration society. My dad was responsible for bringing European designer merchandise to this country and Murray followed soon after, focusing on classical Italian looks. And classic never goes away.”

Tom Kalenderian, executive vice president and general merchandise manager of men’s wear for Barneys New York, said: “Mr. Pearlstein was an icon in the men’s industry; he was a pioneer in his field and was an exceptional tastemaker. Not only did he introduce Americans to new ideas, he literally educated every customer he came in contact with, sharing his limitless passion and love of Italian style. He was the first to embrace color and the mixing of patterns, which he did with such ease. Louis of Boston became a mecca for style and discovery, thanks to the incredible talent and discerning eye of this great merchant.”

Peter Rizzo, senior vice president and creative director of merchandising for Saks Off 5th, who had been executive vice president of Barneys during the Fred Pressman years, said Pearlstein, Pressman and Grodd were the “three great men’s merchants in this country” and had “game-changing ideas and innovations. Cliff thought he was above the trends and Fred and Murray were in the middle of the trends.” The three had “fierce communication styles,” but they addressed problems “openly, intelligently and with transparency so that they could get to a solution. They were brilliant.”

Started by Louis Pearlstein in the late 1800s, the original Louis Boston was not the high-end retailer it is today, but rather a small pawnshop that specialized in the mending and resale of immigrant clothing in nearby Roxbury, Mass. In 1929, inspired by their father’s love of clothing, Louis’ two sons, Saul and Nathan, opened a small, upscale, made-to-measure shop in Boston and named it Louis. Murray Pearlstein, the son of Saul, took the business over after graduating from Harvard, and in the Sixties he began importing clothing from some of Europe’s top designers including Pierre Cardin, Yves Saint Laurent, Giorgio Armani, Gianni Versace, Luciano Barbera, Mariano Rubinacci, Paul Smith, Gianfranco Ferré, Dries Van Noten, Kiton and Brioni.

Over the years, Pearlstein branched out and opened outposts of Louis in the Chestnut Hill Mall and Harvard Square, as well as on 57th Street in Manhattan. In 1990, he consolidated operations into a stunning location in the former Museum of Natural History at the corner of Newbury and Berkeley streets in Boston.

Pearlstein’s opinions about retail and men’s wear were direct and unabashed. In an interview in 1995 with DNR, the former brother publication of WWD, Pearlstein attributed Louis’ success to the way the store was assorted.

“We’re unique in the way we approach a collection and the way we order it,” he said. “We do some things that might not even be considered good retailing. We’re very preoccupied with how the store looks and what kind of statement it makes to the customer, so the collection becomes very focused.…The shirt and neckwear have to go with the jackets, the suit. Everything has to work together. We go into the market and do the tremendous editing job. We think we pick the best of what’s out there, and we begin at the mill level.”

While the original store was low-end, it was luxury brands such as Armani, Zegna, Kiton and Brioni that put Louis on the map. Pearlstein responded to the upscaling of the store this way: “Over the years, the biggest complaint was that we were too expensive. So we embarked on a program to introduce some lower-priced merchandise with some very nice little stories. I haven’t succeeded with one of them. The better stuff still sells faster, has a better rate of turnover and more of a profit margin than the less expensive merchandise.”

Pearlstein said he looked at Louis as “a shopping center for better clothing and designer labels. Each designer has its own room or area with a manager. We sell by collection. You don’t see a suit or shirt department in the store. We have shirts in every room, but they go with the suits in that room. A customer visiting all of our four floors always has one person taking care of him. We don’t have commissions, so our people can move and sell everything from top to bottom. They take the customer right up to the end and never turn him over to somebody else.”

Pearlstein also railed against retailing’s promotional climate, saying: “I don’t blame the customer for looking for sales because the retailer begs him to — invites him to. He’s never sure what price he’s paying. What kind of credibility can we have? The preseason summer sales at the department stores begin in May when specialty stores like us have been receiving and selling goods at regular price. In the winter, the sales begin at the end of October. If the big stores had a stable price through the season and sales at the tail end of the season, or once or twice a year for a very short period of time to clean out their stock in that manner, the business would have some integrity.”

Debi Greenberg, Pearlstein’s daughter and the current owner of Louis Boston, said her father taught her that “product is everything. He said to always strive for the best and not be satisfied with anything less.” She said he encouraged her to “value your inventory and not give it away, and present and house the product in an environment that is pleasing and enjoyable for the customer. Show product so that a gentleman can understand what you’re trying to achieve.”

Greenberg said those lessons still ring in her head every day. “He told me to make sure the integrity of the product is there. That’s the most important lesson I learned and it’s been the hardest to maintain. But in the long run, that’s been the one that has allowed us to succeed.”

In addition to Greenberg, Pearlstein is survived by his wife of 23 years, Jeanne Barbour Pearlstein, of Santa Fe, and his daughter Nancy Pearlstein, who opened the first women’s department at Louis and now owns and operates her own women’s specialty store, Relish, in Washington. His son, Steven Pearlstein, is a Pulitzer Prize-winning business and economics columnist with the Washington Post who now teaches at George Mason University. There are also three grandchildren. Steven Pearlstein said no memorial service is planned.