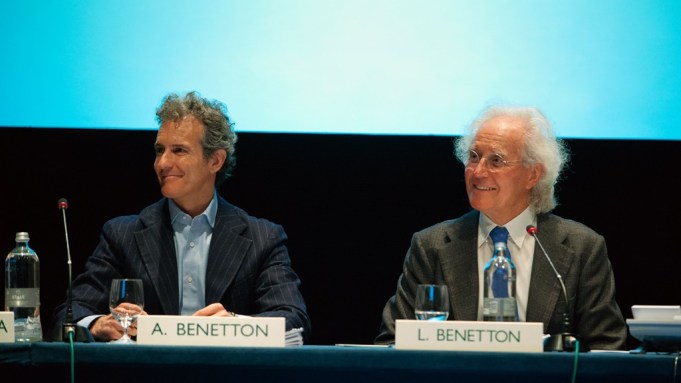 PONZANO VENETO, Italy — Luciano Benetton, co-founder and chairman of Benetton Group, said Tuesday that, after 47 years, he was passing the baton to his son Alessandro, who was previously executive vice chairman.

The shift confirms earlier WWD reports and comes as Benetton’s parent company, Edizione Srl, has decided to delist from the Milan Stock Exchange.

At a press conference at Benetton’s headquarters here, a fit and upbeat Luciano Benetton, 77, avoided nostalgia and said he was “planning to continue sailing around the world.”

Alessandro Benetton, 48, has a Boston University degree, Harvard M.B.A., and experience at Goldman Sachs in London as a mergers and acquisitions analyst. In 1992 he founded his own holding called 21 Investimenti, which today operates under the name Gruppo 21 as a private equity fund with capital of 1.3 billion euros, or $1.7 billion at current exchange.

Luciano Benetton said his son has shown through his career that he “never gives up. He wants his initiatives to be successful.” When asked to identify one of his son’s qualities, the father said with a smile that Alessandro is “not lazy and very engaged by his work.” Not like himself, he quipped, adding that he “would never have worked, if [he] hadn’t needed to.”

The new chairman needs all the energy he can find, admitting at a press conference held after the group’s board meeting that, despite “his pride in this new responsibility, his love and passion for the company,” he knew “it’s an uphill road.”

“I don’t hide the fact that it’s a very complex situation, but I’m not scared, it’s not the first crisis, not for Benetton and not for 21 Investimenti, either, and we have all the tools to face it,” he said.

The Italian textile and clothing manufacturer and retailer has been battling changing consumer tastes, rising raw material costs and the weak economies of Europe, especially Italy, its largest market. The company’s shares fell to as low as 3 euros late last year, compared with a high of 15 euros in 2006.

“The delisting is a signal that Edizione shows commitment to this business, that we have wanted to invest in ourselves and dedicate time to improve the company,” said Alessandro Benetton, who is also a member of the board of Edizione, a holding group whose investments range from highway catering and communications to real estate and agriculture.

“We are moving our horizons to a medium-long term, which is not in the nature of the Bourse,” Alessandro Benetton said.

He spoke highly of the listing, which took place in 1986, but said that “the world and circumstances have changed, the business model is different, the situations are more complex” and that there are new ways of obtaining financing today. “I don’t rule out [another initial public offering] in another 10 years perhaps, but this is a new cycle,” he noted, explaining that he didn’t foresee the entrance of other shareholders, industrial or financial partners in the group.

He firmly dismissed any kind of merger, including one with Spain’s Inditex Group, owner of the Zara brand. A deal between the two companies was rumored to be taking place when Edizione was initially planning Benetton’s delisting in January.

Going forward, Benetton plans an “intense three to five years,” aiming at expanding its business in those countries “where there is growth” — India, Russia, Turkey, Central America, Korea and Taiwan. The group has a network of 6,500 stores in 120 countries, and Benetton reiterated on Tuesday that the company has no intention of spinning off its real estate assets, with the knowledge that it is “present in the best streets in the world.”

Benetton is also looking at developing the Chinese market, but acknowledged that the “priority is to go where there is a team,” as it needs to secure a local partner in China first.

In terms of product, Benetton tapped former Levi’s vice president of global merchandising and design You Nguyen last year to reinforce the brand’s design. The new chairman said the idea is to create “10 collections per year,” in order to have “fresh stores once a month,” and to further develop the group’s other brands as well as the namesake line, its new multibrand concept Playlife, Benetton’s children’s wear segment and the fashion-oriented Sisley label.

“We have a colorful vision, it’s not all black,” said Benetton, naming opportunities in mature markets as well. “We are determined and the brand walks well, it has good legs.”

He insisted on improving marketing mix, underscoring the high quality of the merchandise at an accessible price. While Benetton revealed the group had purchased a 2 percent stake in Brunello Cucinelli SpA during the latter’s IPO, Benetton said he has no plans at becoming a luxury group. “Luxury is not a world we belong to,” he said. He also pointed to his goal to attract a younger customer, engaging on the Web, focusing on creativity, shopping experience, communication and Benetton’s core “colorful knits.”

The first quarter already shows positive signs, he said, with February and March fashion flashes “very much appreciated,” although April, with its heavy rains and unstable weather, was “not encouraging.”

The board approved Benetton’s decision to delist after 26 years on the Milan Stock Exchange. Earlier this month, Edizione said that it considered the result of the tender offer to buy the 25.15 percent of Benetton shares it did not already own, launched on March 5 and ended on March 30, “satisfying.” Shares were priced at 4.60 euros, or $6.04 at current exchange. Benetton said the price, despite controversial reports in Italy’s media, represented “a reasonable premium” for shareholders, given that shares were trading at 2.80 euros, or $3.70, before the decision to delist was revealed.

Benetton’s real estate portfolio has been at the center of ongoing speculation over the past few weeks, as analysts questioned the share price, given the value of the group’s property assets, estimated at about 1 billion euros, or $1.31 billion.