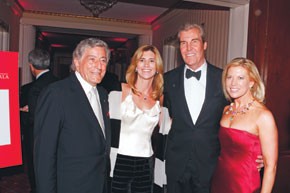 Cast aside those economic woes and consumer concerns, at least for a black-tie event. For Terry Lundgren, Macy’s chairman, chief executive and president, Monday night was one giant toast to “The Good Life.”

Tony Bennett crooned the classic tune on the stage of the ballroom of the Waldorf-Astoria, capping an evening where Lundgren received Carnegie Hall’s Medal of Excellence, recognizing his commitment to arts philanthropy.

The evening raised a record $4.2 million for the concert hall’s artistic and education programming.

Mayor Michael Bloomberg presented Lund­gren with the award. “I’m not going to ask how do you get to Carnegie Hall. The reason is GPS will give you the answer….Just 50 years ago, it was headed for the wrecking ball,” said Bloomberg.

But artists, civic leaders and elected officials banded together to keep it alive, the mayor recounted, making an analogy to the similar mass effort led by Lundgren, a member of the Carnegie board, to support the West Side concert hall. He credited the Macy’s chairman with being instrumental in getting Carnegie its technologically advanced Zankel Hall built in 2003. “If you want to have something done, go to the person who is the most busy,” Bloomberg advised.

“Carnegie stands tall against any music hall in the world,” Lundgren said. “My only regret is that we couldn’t hold this event at Carnegie Hall.”

“Carnegie Hall is my favorite place in the world to perform,” said Bennett. “I’ve performed there at least 12 times and when you add up the special benefits — it’s 20.”

Just about all the celebs appearing in Macy’s commercials were present, including Martha Stewart, who’s feeling a bit of the good life herself now that her Macy’s collection, she said, is faring well. “Business is good — despite, despite. I’ve got my fingers crossed.” The collection has been expanded to about 300 sku’s, with housewares and “the very high-end bedding” performing the best.