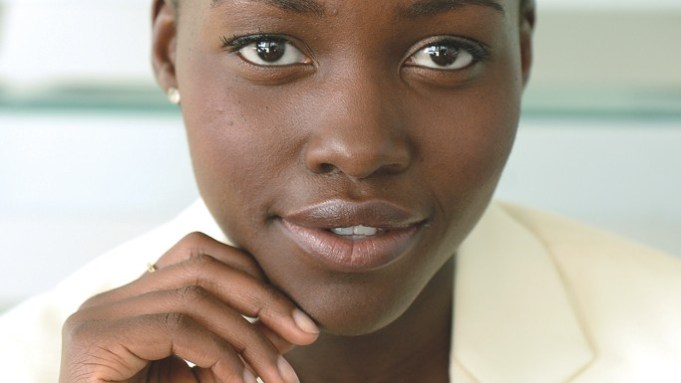 Don’t mistake Lupita Nyong’o for some lightweight starlet who’s been pushed into the limelight with an Academy Award win.

The 31-year-old Kenyan-Mexican actress — who last month won a best supporting actress Oscar for her role as Patsey in “12 Years a Slave” — is a bona-fide triple-threat: an actress, a director and a producer. Not to mention she’s just inked a deal to be the next face of Lancôme.

It has been an action-packed month for her, and the pace is likely to stay that way for the foreseeable future. So what was the first thing that went through her mind when she was named an Oscar winner?

“It was ‘Did I say my name or did they say my name?’” an animated Nyong’o said, leaning forward in her chair during an exclusive interview with WWD. “All that time from ‘The nominees are…’ to ‘The Academy Award goes to…’ is years! It’s just way too long. And then your head is just filled with your own name, because that’s all you can think of — either they are going to say my name or they aren’t going to say my name. It’s a suspension of time, and the only thing that matters is ‘Are they going to call my name?’ Then they said my name, and my brother was screaming and losing his mind.”

How has it changed her life thus far? “I was dazed and confused and I still am,” she said with a grin. “It doesn’t feel real. I couldn’t believe I was climbing up the very same stairs that Jennifer Lawrence was climbing. It’s still very surreal. It’s changed a lot — more people know who I am, for example, and I’m sure it’s bound to change [other] things.”

But thus far, the additional pressure hasn’t quite sunk in. “I’m sure it will at some point, but right now I’m just too exhausted. It does have a psychological affect. But at the end of the day, the perceiver affects the perceived. So how people regard me will obviously change how I regard myself. Right now, it’s too soon. I feel like the Oscars really did happen yesterday. I don’t have enough time between the event and my reality to really fully analyze how it has changed me.”

She doesn’t expect to have her head turned by Hollywood glitz. “The thing about working in Hollywood is that it isn’t really a geographic location where you go and figure out the culture,” she said. “Hollywood is really just made up of a whole bunch of people making movies everywhere. So it’s still a learning process; I cannot say that I’ve fully integrated into the ways of Hollywood — but I don’t know very many people who could say [they have] anyway. In my version, the Hollywood that I live in is very much peopled by people I’ve known from before. I carried my family through this entire process, and they made it more manageable.”

Part of what makes her so grounded is that she knows the movie business from both sides of the camera. Armed with a bachelor’s degree in film and theater studies from Hampshire College and a master of fine arts degree from the Yale School of Drama, Nyong’o worked as a production assistant on films like “The Constant Gardener” and “The Namesake” and went on to write and direct the documentary “In My Genes” before she took on the role that has given her fame.

“I hope [the experience has] informed me and made me a better actor, for sure, because knowing what happens behind the camera is always very important for an actor to know. Yes, we are the face of a thing but we’re really not that important, you know what I mean?” she said with a booming laugh. “We are the most important and then also the least, because so many people have to get things coordinated before we step on that set. I have an appreciation for that, and I think that makes for a better working relationship.”

She felt that keenly while filming her role in “12 Years a Slave.”

“It was difficult, because it’s not just an intense story, it’s a true story,” she said. “So the responsibility of [telling the story of] people who actually tread the earth was something that I had in mind at all times. And the time period is seldom explored in film, so it was an extra responsibility. But you have to put that pressure aside and just do the role at hand. I’m one individual — not trying to represent the umbrella that is slavery and the 300 years it was in place. I focused on that one individual, because focusing on the specific captured the general.”

Despite the gravity of the role, Nyong’o was realistic about her chances at the Oscar: “By being nominated, I had a one-in-five chance. There’s no saving yourself from the turmoil of whether you’re going to win or not — you just have to go with it. It didn’t really matter, because I didn’t expect to be nominated. And I was thankful to have the platform to thank just a few of the people who made it possible for me to get to that point.”

Nyong’o is eager to try a little bit of everything when it comes to acting. “I want to have a diverse career,” she said. “I’m interested in action and fantasy; I’d love to do animation. That would be fun. Comedy, believe it or not. Thrillers. That’s an actor’s dream: To have a diverse career that asks me to go into scary new places within myself. I do well when I step into things I know nothing about. I thrive when I come from a place [like that].”

Any dream roles? Nyong’o is unequivocal: “No.” Dream directors? Different reaction entirely: “Tons. I love Pedro Almodóvar and Ang Lee and Kathryn Bigelow. So there are a few.” But she remains mum about upcoming roles. “Nothing I can speak of,” she said.

She’s also keen on doing stage work, something she came to enjoy at Yale, where she played such roles as Perdita in Shakespeare’s “The Winter’s Tale.” “Most definitely, yes. I am hungry to go back on stage.”

Next up is Nyong’o’s Lancôme deal, with ads that will break in September for an as-yet-unidentified product. Nyong’o joins Julia Roberts, Penélope Cruz, Kate Winslet and Lily Collins as celebrity ambassadors for the brand. “What appealed to me about Lancôme is that they’re not dictating what beauty is,” she said. “What they do supports something that already is — and that was appealing to me, too. It’s what drew me to them. Hopefully it’s a symbiotic relationship — that I benefit from being associated with them, and they benefit from being associated with me, as well. And for the consumer at large, I think Lancôme has a range of products for every woman, and I think having me will expand people’s understanding of, hopefully, what Lancôme stands for, who Lancôme is for.

“I had to give a speech about beauty right before the Oscars,” she continued, “and for me, beauty is a compassion for yourself and those around you. And I think that in focusing on that, the light inside illuminates the beauty outside. The idea that Lancôme now has a few actor ambassadors is significant because actors are not just faces, they are spirits that people enjoy and relate to more than in an aesthetic way. We have the privilege of standing for something other than just looks.”

One of Nyong’o’s personal inspirations is model Alek Wek. “When she came on the scene, I felt more seen,” said Nyong’o. “Having me on a huge campaign like this will hopefully do that for other girls or people who feel unseen or underseen.”