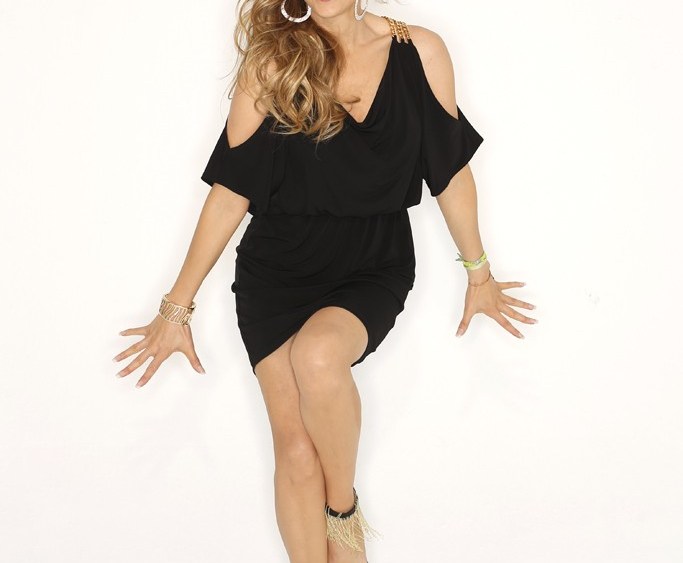 That next hot item — it might very well be Thalia’s leopard jumpsuit for Macy’s.

It’s cougar-ish, a bit familiar, and Thalia Sodi makes it modern. “Tommy loves that jumpsuit,” said Thalia, the Mexican songstress, soap star and wife of music mogul Tommy Mottola. “Maybe it’s the fact that you are all covered up and it shows just a little skin. It’s sexy. There’s some kind of wildness.”

Thalia is bringing her sultry Latina style and effusive personality to mainstream retailing by teaming with Macy’s on an exclusive multiyear Thalia Sodi collection. The launch is set for the first week of February, and there’s nothing coy about it — not the look, the distribution or the celebrity behind it. At the outset, 300 Macy’s stores and macys.com will sell the collection, which contains over 200 stockkeeping units.

“It’s the biggest private-brand launch in the history of our company by a long shot,” said Jeffrey Gennette, Macy’s president. “It’s the first time we’ve launched a private brand in multiple categories — dresses, tops, pants, shoes and jewelry. There isn’t a metro market that won’t have some level of exposure to the brand,” with the highest concentration in states such as Texas, Florida and California, and cities like New York, Miami, Los Angeles, Chicago, Cincinnati, Columbus and Detroit, with the largest Latin American communities.

So does Macy’s. For the $28 billion, 840-unit retailer, targeting the Latin American community has been a big miss. It’s a so-called “white space” in the merchandising that Macy’s wants to fill, in light of the dramatic growth in the demographic. Executives say that within a few years, 20 percent of the traffic in Macy’s will be Latino, from the current 16 percent. Nevertheless, there are no brands in the store specifically targeting Latinos, and Kohl’s and Kmart have a head start with their Daisy Fuentes and Sofia Vergara lines, respectively.

The demographics are enticing. According to 2013 census data, there are 54 million Hispanics in the U.S., representing 17 percent of the population and $1.5 trillion in buying power. By 2050, Hispanics are expected to represent 30 percent of the U.S. population. One of every four babies born in the U.S. is Hispanic, and, in terms of overall population growth, Hispanics account for more than 50 percent. They spend 22 percent more than non-Hispanics and tend to spend more of their discretionary income on fashion compared with other groups.

In terms of sartorial preference, “It’s very much in that VIP mode,” observed Martine Reardon, Macy’s chief marketing officer. “They always want to dress to the nines. They love to buy head-to-toe. They over-index in buying apparel, food, jewelry, cosmetics and fragrances. The other place they spend is in children’s, but they really care about what they look like.” Thalia, said Reardon, is always “put together” — from the hair and makeup down to the shoes and jewelry matching back to the apparel outfit.

Clearly, there’s a commercialism about Thalia Sodi for Macy’s. While it doesn’t break new fashion ground or play too ostentatious, it seems fresh, flirty and focused on evening dresses, formfitting styles, animal prints, reds, gold accents, a good deal of stretch and knits over wovens to handle Latina curves — Latinas tend to be shorter and bigger around the waist. It’s geared for thirtysomethings, though younger women could wear it. Thalia’s evening orientation, aside from its cultural bent, Gennette said, will be a differentiator on Macy’s casual-dominant selling floors. “This product is very dressy and very colorful,” Gennette observed. “A lot of our brands are casual. It looks different from what we have on the balance of our floor.” The apparel is merchandised as a collection in a branded shop with a large Thalia image, and the main floors of flagship stores have a display fixture as well, highlighting all the Thalia categories.

The jumpsuit’s the sizzler, but there’s also a spicy, bright red wrap dress with a big gold clasp that Thalia wears with three-ring drop earrings and leopard-print open-toe heels, along with a gold faux-leather moto jacket that she wears over a white top and pants. “They’re extensions of my personality and my culture ­— feminine, sexy, young at heart. The whole line is attitude,” said Thalia. “We enjoy life. We have family. We have kids. We are mothers. But we have to have fun. We have to go out and have our margaritas.”

It turned into a long night out when Thalia and Mottola met 16 years ago, on a blind date at Scalinatella on Manhattan’s East Side, set up by Gloria and Emilio Estefan. It would be just for drinks — or at least that was the plan. “When I showed up, I saw this guy dressed all in black and holding a martini. I hoped that was the guy.” Drinks extended into dinner. “We forgot the world,” Thalia said. “I was smitten,” added Mottola. Thalia maybe less so, telling her date they could meet again in another year and a half, when she returned to New York. Mottola wouldn’t wait, and started sending her flowers and letters. Persistence paid off. Soon they starting meeting in Miami for weekend rendezvous. They married in 2000.

The power couple have worked on music projects, acting projects and a short-lived Thalia for Kmart apparel line launched in 2003. It covered more sportswear and home products, lacked the focus that Macy’s has achieved and was further held back by Kmart’s own sagging fortunes.

Thalia first performed at age nine, and in 1986 joined Timbiriche, a Mexican rock band that was commercially successful for a decade. She launched a solo career in 1990 and has since sold more than 40 million records. She’s appeared in Victoria’s Secret ads. She’s on the Hollywood Walk of Fame, and at a White House performance celebrating Mexican heritage, she asked President Obama to dance. She’s an author and a mother of two.

While wearing many hats, Thalia is not a designer, and she doesn’t have the cross-cultural recognition as J.Lo or Sofia Vergara. But Macy’s could be a breakout moment. She’s provided input into the Macy’s collection, picking colors, prints and silhouettes, emphasizing the importance of having animal print on the selling floor at all times, and the importance of gold as a trim, seen across apparel and shoes and in some statement pieces. She also convinced Macy’s to make the blouson dress a key item for spring. “She counseled us on the body types and fabrics to use,” Reardon said. “She wanted really comfortable fabrics.” To flatter the curvy Latin figure, the collection has plenty of fabric with give and ruching, to hide or enhance where necessary.

With marketing the Macy’s brand, Mottola said, “We’ll lock up our core audience first, though all of the advertising and marketing has such a wide, diverse reach — not only to the Latin market but the general market, in a simultaneous way.” Mottola drew an analogy to Sony Music and its “Latin explosion” of music with Ricky Martin, Shakira, Gloria Estefan and J.Lo. “We owned the Latin market, but it became global. That potential is all here….We are already working on a lot more categories. I can’t disclose those.

“I have always observed, in any business and in any category of business — be it fashion, music or entertainment — if you have differentiation and you can disrupt the marketplace and you can cater to an audience, at a price, with something fresh and new, you will win. It is just that simple. Obviously, there are a lot of things to execute, but honestly, not since being the chairman of Sony Music have I seen such a team, an army, behind a project like this. This is from the top down. Everyone on the Macy’s team is involved,” Mottola said. “The leopard jumpsuit — it’s a killer. It’s going to fly.”