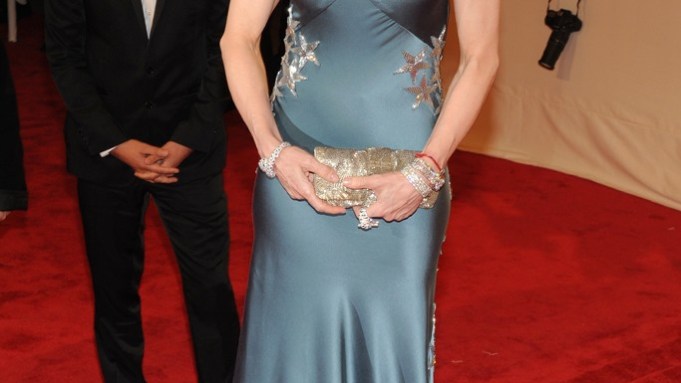 Fashion week saw plenty of fragrance deals Tuesday — or at least talk of them, including two designers and one megacelebrity: none other than Madonna.

The Estée Lauder Cos. Inc. confirmed it has signed a fragrance license with Marni, while speculation swirled Tory Burch could be the next brand to join the Lauder fragrance stable even as she is also said to be in talks with Coty. Fueling the talk of a possible Burch-Lauder license was the appearance of Fabrizio Freda, president and chief executive officer at the Estée Lauder Cos., and Aerin Lauder, creative director and chairman of Aerin LLC, at the designer’s first runway show on Tuesday morning.

Meanwhile, Madonna — the Great White Whale of celebrities without a major fragrance deal — also is said to be in serious discussions with Coty.

While no deal has been signed, a Madonna license would give Coty an alluring trifecta of star power — along with Lady Gaga, whose scent is due next year, and Beyoncé, who has done two pillar scents and a flanker (no word on whether she’s planning another fragrance around her other new arrival, a baby said to be due in late February). It also would cap Coty’s dominance of the celebrity fragrance market, a category it revived in 2001 with the launch of Glow by J.Lo, the debut scent from Jennifer Lopez.

A Coty spokeswoman declined comment while Madonna’s representatives could not be reached.

The megastar has generated fragrance rumors since 1997, although none carrying her name has made it to market. However, with her Material Girl apparel line at Macy’s, Madonna has already dipped her toe into the beauty waters, having launched nail polish, lip gloss, body sprays and lotions under that brand last month. She will also expand into party dresses later this month and outerwear in October.

The rumors swirling now are that, under a Coty deal, Madonna would introduce a scent under her own name, a prospect that has beguiled the beauty industry for years. For instance, in 2007, when she was rumored to be hatching a $120 million deal with Live Nation, beauty executives debated the merits of her fragrance prospects. Despite her difficulties in the past landing scent deals, a number of executives then saw value in a Madonna fragrance. At the time, Firmenich’s Théo Spilka noted, “When something is done, it’ll be absolutely phenomenal and one of those rare [occurrences] that will turn the industry on its ear.”

Art Spiro, then running Liz Claiborne Cosmetics, added, “We have never been in dialogue with Madonna, but a Madonna scent would make sense [in general]. She is an internationally known celebrity who has appeal to a wide cross-section of demographic and cultural markets. It could be an interesting opportunity for someone.”

For now, that someone could be Coty — if it can meet what have in the past been huge demands by Madonna.

While the beauty world was abuzz with speculation about the talks, Lauder unveiled a deal to launch a fragrance for cult Italian brand Marni.

With the signing of the Marni license, Veronique Gabai-Pinsky, global brand president of the Aramis and Designer Fragrances division of the Estée Lauder Cos., said she is aiming to increase the division’s market share in Europe. “We are strategically aligning our portfolio,” said Gabai-Pinsky, noting that the bulk of the division’s designer licenses — including Michael Kors and Donna Karan — are with Americans. “This is an effort to further develop a European business, particularly in the high-end of the market. We started that effort with Zegna [which the company took over on July 1] for men, which gave broader reach in Europe and Asia. Marni is a fantastic opportunity to heat up our women’s business in Europe and in the luxury market.”

Gabai-Pinsky also noted that the effort will be to develop a stable of classic fragrances rather than a promotional business. “We want to build at the high end and anchor it with creativity and quality,” she said. “This is not about launching a new fragrance every year. It’s about doing it strategically and complementing our existing portfolio with non-competing brands.”

Gabai-Pinsky believes the brand will appeal strongly to women in their 20s, 30s and 40s.

The first Marni scent could launch as early as fall 2012. Considering her own tastes, which are likely to be reflected in the new scent, designer Consuelo Castiglioni said, “I personally like woody fragrances, with a touch of incense, but never too penetrating.”

She noted it was too early to talk about details such as the name or the kind of bottle she would like for it. The designer said it was “the right moment” for a Marni scent. “There was no rush and we are doing it the way we wanted to do it.” The fragrance is due out in about a year, she added.

Marni is known for mismatched patterns and quirky fabrics in exuberant, artistic colors. Castiglioni experiments with unconventional treatments and intricate materials, often with techy finishes. She loves layers and enjoys topping her bold and playful designs with men’s style pieces and colorful glasses.