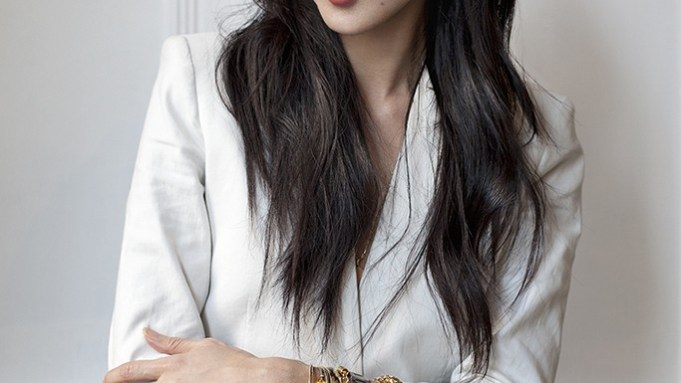 Gap Inc. is taking a page out of the LVMH Moët Hennessy Louis Vuitton playbook.

The U.S. retailer on Tuesday revealed it has taken a minority stake in contemporary designer Marissa Webb — who, in turn, is becoming creative director and executive vice president of design at the Gap Inc.-owned Banana Republic. The investment is a sign the Gap business model is adapting and that the company is ready to take new steps as it seeks to reinvigorate its brands in a competitive landscape.

Webb worked at J. Crew for more than a decade before leaving to start her own label in 2011.

Jack Calhoun, global president of Banana Republic, said Webb “has a keen understanding of our heritage and all that makes us who we are, but at the same time a strong vision for how we can move forward to make BR even more relevant for today’s market — both our current customers and those we want to attract.”

That suggests a certain desire to move things along at the brand, where comparable-store sales slipped 1 percent last year and total sales stalled at about $2.9 billion (making up nearly 18 percent of Gap Inc.’s total revenues).

Webb takes over from Simon Kneen, whose departure was revealed in October, when Calhoun said, “As we compete to win on the global stage, now is the right time to make a change.” Kneen favored collaborations, working with “Mad Men” costume designer Janie Bryant, Trina Turk, Milly and Issa and the late L’Wren Scott. Narciso Rodriguez was recruited to help the brand in August 2012, but left when his contract expired.

“She did work at J. Crew and she did work at Club Monaco, and those are two brands that deliver a value with a lot of style, they pack a lot of punch,” she said. “The question is, ‘Who is Banana Republic?’”

Vernon noted that the brand carries traditional work looks and also collections from fashion powerhouses with some lower-priced items as well. “Banana hasn’t really determined who it is from a product standpoint for years,” she said. “In hiring [Webb] they are making a modern America move. I don’t think it’s super risky because she’s got that training from J. Crew and Club Monaco, which is a lot of [stockkeeping units] and balancing your margins and your price points.”

Allan Ellinger, senior managing partner at investment bank MMG, noted that Gap Inc. has worked with designers in the past, bringing in Patrick Robinson to oversee design at its flagship division.

“It works best when the designer kind of follows or understands the point of view of the store that she’s been hired to design for and can kind of make sure that she’s loyal to that point of view,” Ellinger said.

He added that Webb’s years at J. Crew will be “invaluable” as she transitions to another take on “modern traditional” at Banana Republic.

Gap Inc. said Calhoun would also be “a strategic partner in the growth and development of her business.”

Webb launched her namesake contemporary label at Barneys New York in early 2013. It is now sold online and in more than 30 stores, inclusive of Gap Inc.’s Intermix division. Bedrock Manufacturing Corp., the investment and brand management vehicle of Fossil founder Tom Kartsotis, also has a stake in Webb’s business.

Webb was not available for an interview Tuesday, but she has been attending to her business, chatting up customers during a sample sale at her sixth-floor studio on 11th Street in Manhattan over the weekend, her dog in tow.

The investment in Webb’s business follows Gap Inc.’s purchase of Intermix last year, which showed a new willingness to have a hand in the contemporary market. There is also precedent, particularly in the designer sector, of big brands supporting their designer’s own businesses. LVMH, for instance, invested in Marc Jacobs and is now preparing a public offering of that brand. It also recently has taken minority stakes in Italian designer Marco de Vincenzo and, in London, designer J.W. Anderson. Its rival Kering, meanwhile, has invested in brands such as Christopher Kane and Altuzarra.