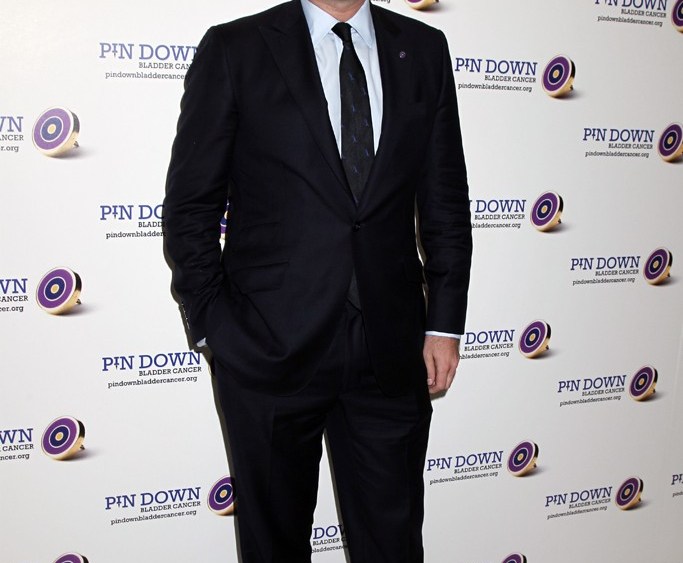 The memory of the late Marvin Traub hung thick in the lofty environs of the Four Seasons Grill Room in New York on Wednesday evening at the launch of the “Pin Down Bladder Cancer” initiative. The fund-raising and public awareness campaign was created earlier this year by Marvin Traub Associates, the consulting firm headed by Traub until his death from bladder cancer last week.

“We thought about maybe canceling this event out of respect. But we all figured that’s the last thing Marvin would have wanted,” said Mortimer Singer, president of Marvin Traub Associates. “This is what he loved. He loved charity and he was a big philanthropist in his own right.”

The campaign enlisted accessories maker hook + Albert to create a purple, black and yellow pin that raises money for the Memorial Sloan-Kettering Bladder Cancer Research Fund. The pins sell for $22.50 and are available at Gilt.com, hookandalbert.com, Bonobos.com and Pindownbladdercancer.org. They are also available in-store at Billy Reid and overseas at Aishti in Lebanon and Bloomingdale’s Dubai. (Traub was chief executive officer of Bloomingdale’s for 13 years.)

New York City Mayor Michael Bloomberg made a pit stop at the event with girlfriend Diana Taylor. “This tells you what New York is all about. We don’t just sit around and complain about things. We try to do something about it,” he declared during a brief address. “Marvin Traub is someone we are going to remember, who made a big difference. This is a good cause.”

Bloomberg was lured to the Four Seasons by Margie Kestner, who runs the pro shop at the Deepdale Golf Club in Manhasset, Long Island, where the mayor is tutored in his swing by Kestner’s husband, Darrell. “At first, I thought I’d just hit him up for some dough, because he has plenty of it. But then I decided to ask him to come and shake a few hands and kiss a few babies,” quipped Kestner, who said Bloomberg favors Ralph Lauren’s RLX golf pants and Peter Millar shirts. “He’s a little short and they fit him well.”

Many attendees remembered Traub as a networker and connector par excellence. “I’ve known him from when I first joined the family business. He brought us one of the first deals that I looked at,” recalled Trump, who added that a friend’s mother is currently battling bladder cancer. “He was always traveling and he knew everyone.”

Lauren Santo Domingo said she met her business partner in luxury e-tailer Moda Operandi, Aslaug Magnúsdottir, through Traub. “He made the introduction, which was the first step,” she noted. Magnúsdottir previously cofounded investment vehicle TSM Capital with Traub and Singer.

Lisa Anastos, the founder of Arthood.com, knew Traub from her days as a partner in the Christian Francis Roth business in the Nineties. “Marvin was an incredible champion of young designers and he was extremely supportive of Christian…and was extraordinarily generous with his time and advice,” she said.

While mourning the death of its company’s founder, the team at Marvin Traub is “already back in the trenches and back in the saddle,” working on projects, noted Singer. Among those are the opening of a new luxury retailer in Johannesburg, which is being advised by former Neiman Marcus chairman and ceo Burt Tansky, a senior adviser at Marvin Traub Associates.

“It’s emotional but the company is set to continue. Marvin had the presence of mind and the ability to think into the future, as usual, to set the company up to be able to continue and flourish,” said Singer. “It’s my privilege and honor to take that legacy and build on it with the rest of the team.”