The incoming president and chief executive officer plans to accelerate the company’s international growth and strengthen its portfolio of brands. 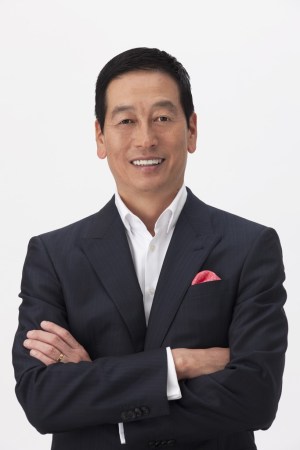 TOKYO — With a former Coca-Cola chief preparing to take charge, Shiseido Co. Ltd. is ready for more than a gulp of the real thing.

This story first appeared in the February 28, 2014 issue of WWD. Subscribe Today.

Masahiko Uotani, who will become the president and chief executive officer of the Japanese beauty giant on April 1, plans to accelerate the company’s international growth and strengthen its portfolio of brands, possibly through acquisitions.

A newcomer to the beauty industry, Uotani stressed that he is still in the early phases of his research about the company’s strengths and weaknesses, so it’s too soon to talk specifics, but he envisions a Shiseido stronger both in its home market of Japan and abroad.

Shiseido took the unusual step of appointing an outsider as its leader rather than following its tradition of promoting from within the company. Uotani, 59, is currently chief executive partner of his own consulting firm, Brand Vision, and has been working as a marketing consultant to Shiseido since April. He will succeed Shinzo Maeda, who is retiring.

Prior to setting up his own consulting company, Uotani, who speaks fluent English and holds an M.B.A. from Columbia University, spent more than a decade working at Coca-Cola Japan, retiring from his role of chairman in 2011. His résumé also includes stints at Kraft Japan and Japanese consumer goods company Lion.

The executive said he plans to leverage his experience in consumer goods and knowledge of branding to bring a fresh perspective to Shiseido, a company that has faced challenges in recent years, particularly in Japan and China. The company has also experienced abrupt leadership changes: Maeda stepped down in 2011 to make way for Hisayuki Suekawa, who resigned just over two years later for health reasons. Maeda then stepped back in to lead the company on an interim basis. In a recent welcome address to the company’s employees, Uotani said he gleaned “a strong sense of crisis” after speaking to Maeda and other board members.

Asked to elaborate on that choice of words, Uotani said he was referring to a “healthy feeling of crisis” within the ranks of the company’s employees. Over the past month, the executive said he has spoken to about 3,000 people at the company and these employees, particularly the younger ones, are anxious to see the group resume a clear trajectory of growth.

“They are enthusiastic to feel the growth. They want to really see they’re contributing to the growth of the business, building the business,” he said.

Uotani said he wants to strengthen Shiseido’s brands by integrating marketing logic into every stage of the business, from planning to product development and delivery. Taking a page from Coca-Cola’s playbook, he said it’s important for brands to make an emotional appeal to consumers.

The executive said he is still assessing the company’s portfolio of brands, so it’s too soon to specify which ones Shiseido will target for future investment and development and which it will “maintain” in a more minimal fashion to keep a presence in certain retail channels. In the past, the company has put particular emphasis on its global Shiseido brand, Bare Escentuals, Clé de Peau Beauté, Chinese cosmetics brand Za and Japanese brands Maquillage and Elixir. Last week Shiseido agreed to sell its Carita and Decléor skin-care brands to L’Oréal for a total of 227.5 million euros, or $312.93 million at current exchange rates.

In terms of international expansion, Uotani made a similar statement — that he needs time to study the company’s various markets. Its global cosmetics business now accounts for 51.7 percent of total sales, while the Japanese beauty business accounts for 46.9 percent. Shiseido registered a 10.4 percent surge in nine-month sales to 535.4 billion yen, or $5.39 billion, thanks to a weak yen. The currency effect propped up otherwise flat international sales and compensated for a drop in the Japanese business.

Uotani said he must answer a series of questions about the company’s geographic reach.

The Chinese market will present a new frontier for Uotani, who has never done business in the country. Last year, Shiseido said that ongoing political tensions between Japan and China hurt its position in the market. But a spokesman said that is no longer an issue for the company, attributing a decline in nine-month sales in China on a cutback in shipments to decrease inventory.

Uotani said local dealers and retailers are already asking him to visit China and sales are starting to bounce back.

“You never know what’s going to happen to political areas. Putting that aside…people, I think, are more realistic and pragmatic,” he said.