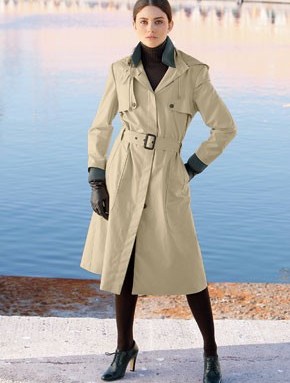 As unlikely as it sounds, a guy walked into a bar in Majorca and signed a deal with Miguel Adrover.

Nearly four years after the designer’s star fizzled out in Manhattan, he is on the ascent again, this time as creative director of Hess Natur, a $100 million, 30-year-old German mail order business of women’s, men’s and children’s wear rooted in environmentally sound practices. During an interview Wednesday in Midtown with the brand’s chief executive officer and managing director Wolf Ludge, Adrover cut to the chase: “Being in a mail order company may seem like a funny marriage. For me, it is something so powerful. By working in mainstream, I can help people realize the clothes they wear affects the environment.

“I love mainstream,” he added. “For me, this company is not based on trends. It’s based on basics and the outdoors.”

When his business went belly-up after 9/11, Adrover traveled a bit, even driving a horse taxi in Egypt for several months. He then retreated to his native Majorca, where he and a clutch of artisans spent eight months building a coffee shop/bar that shows documentary films and has art exhibitions and stage readings. Called Esjac, the name refers to the Spanish word that describes the indentation left after an animal or person has taken a nap. While the word reminds him of how his grandfather often called out the word to him as a child when they walked through the almond fields together, it is also an apt description of his current setup.

“For me, it was a touch of reality after 18 years in New York,” said Adrover. “It was good for me to get back to talk to real people. I reinvented myself somewhat. I think people saw me in a way very politically. I was always trying to express reality but people love fantasy. [As a result,] I think we lose respect for people. Individuals have so much power to help people instead of manipulating people. People need to brush their brains.”

Getting away from city life to spend more time in nature is also essential, he said. Ludge, who has an apartment in Majorca, had read about Adrover’s unorthodox ways and decided to seek him out at his bar. “I had read about the social consciousness behind his work. I thought he could be the perfect guy for us….” Ludge said. “We are brothers in mind.”

That eco-friendly mind-set was more appealing than the first class flights, five-star hotel stays and lucrative salary Tommy Hilfiger offered Adrover to join his team last year, the designer claimed. “What I really liked about Hess Natur was the soul of the company — no doubt about it. I had two offers on the table — Tommy Hilfiger and Hess. I was in the position where I could make a lot of money or I could turn to the other side of fashion. I think the other side of fashion is the future of the universe. Hess fit with a lot of my philosophies.”

But it wasn’t just the chance to work with organic silk, wool and linen that attracted Adrover. Even more appealing was the company’s tie to 2006 Nobel Peace prize winner Muhammad Yunus, founder of the Grameen Bank, a proponent of micro-credits as a means of fighting poverty. Hess Natur has joined the Grameen Foundation to help introduce organic cotton, which can improve workers’ health and living conditions. To some degree, Adrover is over charity as a concept. “Charity makes you feel better. It’s great. But what we need is a project that makes something that will help not just for a month but for life,” he said.

The designer has penned a five-year deal with the option to extend. “Isn’t it for life?” Ludge joked.

Adrover said, “I hope this is for a long time. I hope we will get a lot of offers from leading labels asking us for advice to learn the things we are doing.”

With the designer on board, Hess Natur expects to double its existing $100 million business within the next five to 10 years, Ludge said. Adrover added, “I’m working for the company totally, and I respect what this company is based on. I’m not going to change it all from the inside.”

That said, he has made a few inroads, like having the first look book shot in Majorca.

Founded by the late environmentalist Heinz Hess, Hess Natur’s earth-loving ways extend beyond organic cotton clothing. As Adrover and the rest of the workers can attest, the brand’s Butzbach, Germany, headquarters don’t use air conditioning or elevators to reduce its energy output. The company will not work with farms that use synthetic fertilizers, insecticides or pesticides in order to protect workers and consumers from potential carcinogens and toxins. The company claims to save 70 square feet of poison free land for every shirt it produces due to its “pesticideless” farming, Luge said. The brand also works with the Fair Wear Foundation and the Clean Clothes Campaign, an initiative dedicated to improving working conditions in the global garment industry. As part of Hess Natur’s Life Long Learning program, staffers can take any class they choose to — from Pilates to a foreign language — at no cost.

“With this company, I really feel connected to the world,” Adrover said. “We all eat at the same table. There is no stature. They have all these procedures about workers and their social standards. I go to bed at night feeling like I’ve done something good. I can’t think about doing only fashion clothing if it’s not related to something relevant. These days there is too much bling bling. But that’s what overshines.”

Adrover will get to share his zeal about the collection and see some familiar faces during a May 20 meet-and-greet with American fashion editors in the Hudson Hotel’s penthouse. A trench coated with bee wax for waterproofness is among the pieces the editors will see. “Organic has been put off to the side and it’s known to be a little boring. It’s kind of thought of as ‘Blah,'” he said. “I want to make it exciting, sexy, alive and to be the real thing so that all social classes will be proud to say, ‘I am associated with this T-shirt.'”

Hess Natur’s online store bows in July and the U.S. mail order business will debut in September. In Europe, online sales account for about 25 percent of the $100 million business. The company sends out 3 million catalogues a year, all on recycled paper. Most of Adrover’s pieces in the women’s collection will retail from $100 to $300.

Until now Hess Natur has focused on Germany, Switzerland and Austria. Today, the company unveils a corporate Web site to make American consumers more familiar with its background. With two freestanding stores in Germany, the company plans to open a third in Munich Oct. 16. Hess Natur would like to have concept stores in New York and on the West Coast, but nothing has been finalized. The company is entertaining the idea of finding a strategic partner to do more retail stores. It also is considering wholesaling the Adrover-designed collection to stores such as Barneys New York.

Adrover still has an East Village apartment he uses as a design studio and he is getting his design space in Majorca organized to welcome students from Central St. Martins College of Art and Design, Parsons The New School for Design and other design schools for a major project, about which he declined to elaborate. They will have plenty of reference materials: Save from the reworked Burberry raincoat he plans to donate to the Metropolitan Museum of Art’s Costume Institute and for the handful of pieces he sold to Yoko Ono a few years back when he was trying to keep his business going and was strapped for cash, Adrover has archived 2,700 designs and patterns in his Majorca home.

For the past three-and-a-half years, he has motored along creating his own designs and plans to present a signature collection a year from now in New York, once everything is in order with Hess Natur.

He will also have a photography exhibition of his work in Milan later this year, and has been busy painting, shooting videos and reading poetry. These artsy elements will be incorporated into next year’s Gotham return. “I want to share everything and I want people to see it’s not focused on sales. Fashion can open the eyes of the world,” he said.

In some regard, it’s payback time for the 42-year-old designer, who spent nearly half his life downtown. “I [feel like I] never left here. I never thought about showing in Paris or anywhere else,” Adrover said. “I grew up here, I got support here. New York made me. It gave me a voice.”