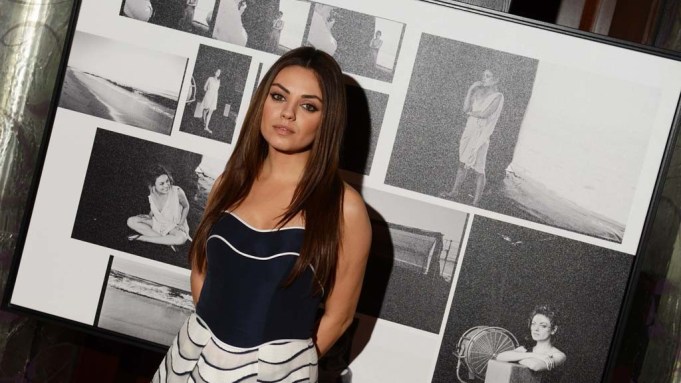 NEW YORK — The lure of sparkle is stronger than snow. At least, that was the case on Monday evening, when a crowd of gemstone fans braved the blizzard to fete Gemfields’ new tabletop book, “Emerald,” as well as its latest advertising campaign featuring Mila Kunis.

Prior to the evening’s main event, a cocktail party at the St. Regis hotel, Kunis joined a small group of press, collectors and friends of the brand for a master class on emeralds taught by jewelryspecialist Joanna Hardy. Hardy, who authored the new tome, detailed the origins of an emerald, as well as her recent trip to Gemfields’ mine in Zambia. “Did they let you keep what you found?” said Kunis from the back of the makeshift classroom in the hotel’s library. “I tried and got in trouble.”

As global ambassador to Gemfields, an ethically responsible mining company, the actress had spent a full seven days in Zambia earlier last year. “Oddly enough, it’s not that long [of a trip],” she said. “You think it’s long, but you’re like, ‘Wait, I’m just getting started.’ You just begin to realize where you are and stop waking up and being like, ‘There’s a monkey outside my door.’ Things like that become the norm, and when they become the norm, that’s when you actually get to experience it.”

Following the class, Kunis explained her attraction to the green gem.“I love the fact that they’re so unique and so different, and not one is like another,” she said. “If you look into it, each stone does have a very specific imprint. You can tell not only the country the stone came from, but you can match it to which mine it came from. There are not many jewels in this world that have that power.”

The new campaign, shot by Peter Lindbergh, show Kunis in her natural state — sans hair or makeup. The black-and-white shots are superimposed with emeralds, also in their natural state — unpolished and uncut. “It’s beautiful to go bare,” Kunis said. “I don’t think enough people do it, and it’s so rare to see a campaign with no makeup that’s kind of effortless. It oddly reflects an emerald. You see all the imperfections in my face the same way that an emerald has imperfections in each and every gemstone.”