The 70-page title features fashion and beauty editorials, as well as interviews with actress Karoline Herfurth and model Eveline Hall. 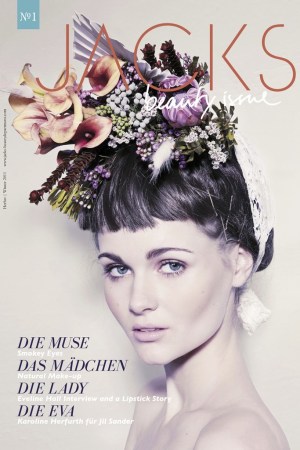 BERLIN — Miriam Jacks has issues — well, at least one.  The 27-year-old makeup artist launched the first edition of her new magazine, Jacks Beauty Issue, this fall to coincide with the beginning of her role as national makeup artist for L’Oréal Paris in Germany. The 70-page title features fashion and beauty editorials, as well as interviews with actress Karoline Herfurth (the face of the Jil Sander Eve fragrance) and 66-year-old performer and model Eveline Hall. Products also take a premier place in the pages.

Jacks, a former child model who went on to study at the Make-Up Designory school in Los Angeles, worked for MTV, Escada and Acne Jeans before launching her own cosmetics boutique, Jacks Beauty Department, in Berlin as part of a mission to spread her love of makeup. To reflect her new role with L’Oréal, Jacks Beauty Department will now add selected L’Oréal Paris products to its carefully curated collection, which includes Ellis Faas, Butter London, Korres, OPI, Cosmetics à la Carte and Beauty Blender. Despite L’Oréal’s mass market roots, Jacks is glad to put the brand on her shelves alongside other niche offerings.  “Some of their stuff is so great, they like my shop, and it incorporates really well together,”  she said.

Ever hands-on, Jacks also has designed a set of signature bags for makeup artists, and a line of colorful hand-painted makeup brushes, which can be seen in action in Jacks’ video makeup tutorials on the German Web site for L’Oréal Paris.