The executive is tasked with further differentiating the brands under the Italian group's umbrella and to boost business outside Italy.

MILAN — Miroglio Fashion has tapped Gaetano Sallorenzo as its new chief executive officer to further boost its business outside Italy.

He succeeds Hans Hoegstedt, at the end of his three-year mandate, and is tasked with further differentiating and developing the 11 brands that are under the Miroglio Fashion umbrella.

Sallorenzo relies on an extensive experience in the industry. Most recently, he was ceo of BVM SpA, which produces and distributes the Les Copains brand, and before that, he was ceo of Stuart Weitzman. His previous posts include ceo of Replay; ceo of Calvin Klein Jeans and Sportswear for Europa and Asia; president North America at Giorgio Armani; executive vice president of Ralph Lauren Europa, and president of Liz Claiborne Europe and then International. He also worked at Benetton Group.

With the arrival of Sallorenzo, Miroglio Fashion also appointed a new board that includes Alberto Grignolo, a former chief operating officer of Yoox Net-a-porter, and Alberto Racca, recently named strategy and transformation director of Miroglio Group. Paola Cillo, associate professor and vice director of department of management and technology at Bocconi University, was reconfirmed.

“The company has an operational capability that is enormous, fully vertical,” Sallorenzo said in an interview at Miroglio’s offices in Milan. “It leverages an incredible industrial expertise and retail network.”

With the plethora of brands it controls — including Elena Mirò; Caractère; Motivi; Oltre; Fiorella Rubino; Luisa Viola; Diana Gallesi and Per te by Krizia — Miroglio can count on “such different business models that can be developed in other markets,” Sallorenzo said. The goal is to differentiate the brands more, so that each is more autonomous, while benefiting from the synergies of the group, Sallorenzo said.

His aim is to boost the autonomy of each brand, which are positioned in the affordable range of the market, and span from the young, trend-conscious label to the curvy offer. The executive’s remit is also to develop the digital channel. The company has five separate web sites. “There is a very loyal customer base and online communication will help further strengthen the contact with that customer, and boost store traffic,” said Sallorenzo, who also relies on fast time-to-market.

Miroglio Fashion is one of the Miroglio Group companies, and, with its revenues of 500 million euros last year, it represents more than 80 percent of total sales.

The company has been streamlining its organization with a re-qualification of its retail network.

The brands are distributed through 1,010 stores and 2,250 wholesale accounts, including 45 corners at El Corte Inglés.

In October, the first Elena Mirò boutique opened in Moscow, and now there are already eight units for the brand in Russia.

In Milan, tourists can’t miss the 13 windows of the interconnected Elena Mirò and Caractère stores overlooking the La Scala theater. 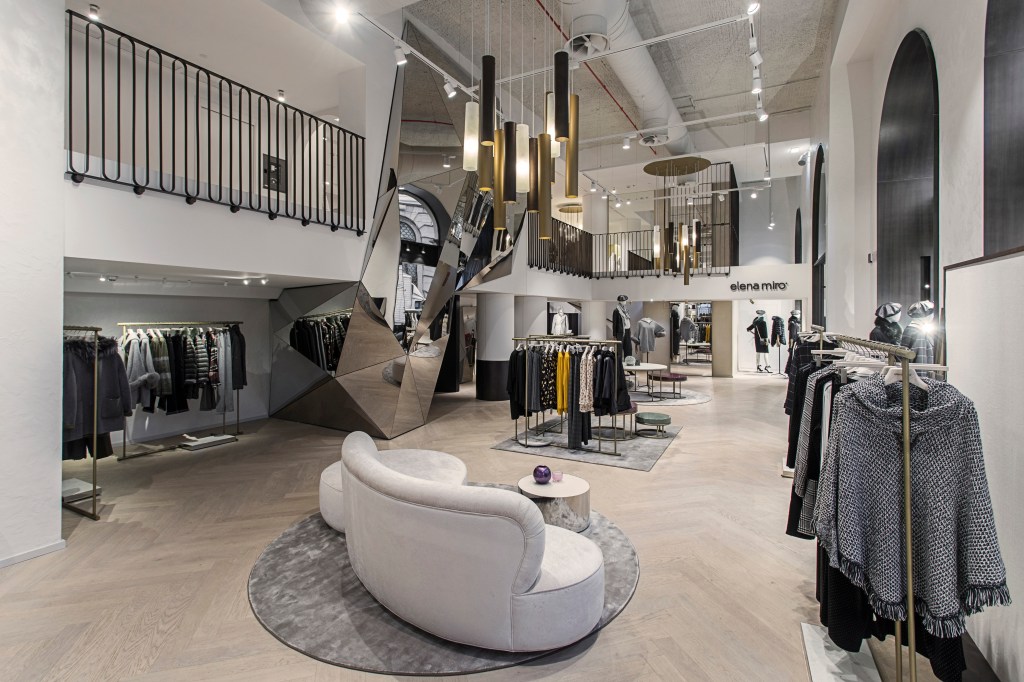 Sales outside Italy account for only 20 percent at the moment, but Miroglio Fashion also has three Turkish brands in a joint venture with Ayaydin, with 275 monobrands. “We have the organization and the structure,” for internationalization, touted Sallorenzo, who is first eyeing the Middle East, as well as further developing Spain and Germany.

With production platforms in Italy, and coordinating production with local partners in Morocco, Hong Kong and Turkey among others, Miroglio is firmly connected with its territory, Sallorenzo said. The company is based in Alba, about an hour away from Turin, and Sallorenzo touted “the family’s continuity and long-term vision.” While an industrial holding today, the group is still owned by the Miroglio family, who marked its 70th anniversary in 2017.

Franco’s siblings, Edoardo and Nicoletta, do not have operative roles in the company and own the remaining 30 percent of shares.