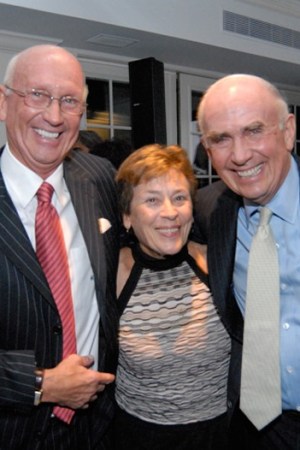 The Mitchells, Connecticut’s first family of retailing, held a hug fest with their suppliers Thursday night to celebrate 50 years in business.

“See, we even hug our bankers,” said Jack Mitchell, chairman and chief executive officer, as he embraced one of the money men at the entrance of the Valbella restaurant in Greenwich, where 160 fashion executives who supply the Mitchells stores gathered.

“Besides doing business together, we play golf, we drink together, we scream at each other and it’s wonderful,” said Bill Mitchell, vice chairman, describing the business relationships that the family maintains. “And that’s what makes it easier to resolve issues.”

In negotiations, “I may walk away not getting what I want; I never walk away saying I got screwed,” said Robert Ackerman, president and ceo of Ermenegildo Zegna Corp. in North America.

The event started with cocktails and wine, then a video chronicling the three generations of Mitchells who nurtured the business. It was started by the late Ed Mitchell in a former plumbing store selling a handful of moderate-priced suits. He passed the reins to his sons and grandsons, who have grown the business through the decades to now include the Mitchells and Richards luxury emporiums in Westport and Greenwich, respectively, Marshs in Huntington, N.Y., another luxury fashion store, and a growing chain of Vineyard Vines shops. The stores are all known for their service, customer loyalty and quality goods.

The evening was filled with well-wishes and plenty of recollections. Joe Cox, a Mitchells team leader, recalled one of his most memorable days on the job. The Mitchells staffers tend to be very discreet about who their customers are — some of the top executives in the world — but Cox couldn’t resist talking about when former British Prime Minister Tony Blair and his wife, Cheri, shopped Mitchells. “There was a long receiving line, as the prime minister walked in, all I could think of was 42 long,” Cox said. He had it right. Blair left with a Brioni suit and some shirts and ties, and his wife shopped for two hours.

There will be more gratitude expressed Friday, when the Mitchells host a charity fund-raising gala at the store in Westport, featuring a performance by Sheryl Crow.