Linder has showcased her androgyny in everything from a Tom Ford ad campaign to a Katy Perry music video. The 24-year-old Sweden native who now lives in L.A. says she's just being herself. 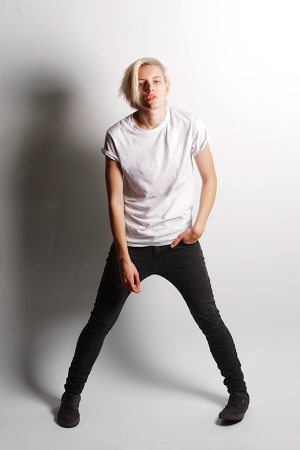 In Erika Linder’s first-ever photo shoot, she posed — convincingly — as a young Leonardo DiCaprio circa his Nineties film “The Basketball Diaries.” That gig marked the start of a versatile career path for the Next-repped model, a former soccer player and self-described tomboy from Sweden who’s since showcased her androgyny for a Tom Ford campaign, a Vogue Italia spread and even a Katy Perry music video.

But in Linder’s mind, she’s just being herself. The 24-year-old Los Angeles-based model, who lives in Silver Lake, Calif., with her girlfriend and their dog Butters, isn’t trying to be subversive or make headlines. “I’m not out there saying, ‘I’m a guy,’ she said. “I don’t want to be labeled. At the end of the day, I’m a girl. I don’t want to have a sex change. I don’t want to only model the men’s stuff. I’m just good at doing both.”

In addition to modeling, Linder, who at times bears a subtle resemblance to model Daria Werbowy and at others the late River Phoenix, also acts, plays music and recently launched a namesake unisex apparel line. She stopped by WWD’s Bryant Park offices on a spring afternoon straight off a shoot with Terry Richardson — who she said was “f—ing cool,” despite having had other preconceived notions of the notorious photographer — to talk about staying true to herself and paving her own way in the modeling industry.

WWD: How did you start modeling?
Erika Linder: I got scouted when I was 14 at this concert in Sweden. They were like, “Do you want to be a model?” I was like, “No.” They were after me for six years. I felt like, “Wait, you want ME to be a model?” When you’re 14, your idea of a model is like — a princess.

WWD: But you eventually changed your mind.
E.L.: I studied law for three years. When I say that to people, they’re like, “Really, you?” Then I studied language for half a year. And then, like everyone else, I wanted to travel and experience the world. So when I was 21, I hit up the [modeling agency].

WWD: What was growing up like?
E.L.: My childhood was pretty great. I have a twin sister. I’m more like her brother, though, if you know what I mean. Sweden is such a great country to have your base in. It’s so relaxed and not intense. With my mom, I grew up 10 minutes outside of Stockholm. My dad lived in the countryside with horses and cows and, like, one neighbor. I stayed with him for a couple of years — it took me two hours to get to school. But I didn’t care. It’s my favorite thing in the world to be outside in the country. I could never live in New York.

WWD: What were your first modeling experiences like?
E.L.: The first year was so hard. I told myself — I was 21 — and I was like I’m gonna model, but I’m gonna do it my way. I don’t want to change and I don’t want to put pressure on myself. But, of course, the agency is gonna do what they know and what’s best for them. I said, “I want to shoot as a guy, too.” They were like, “No.” They didn’t get it.

WWD: So embodying both male and female personas is an idea you originally proposed.
E.L.: Yeah. And back then, it wasn’t really happening as much. No one was really out there doing that. This guy hit me up who runs Candy magazine — Terry Richardson and Bruce Weber had shot for it — they shoot boys like girls and vice versa. This guy said, “I want to shoot you as young Leonardo DiCaprio from ‘The Basketball Diaries.’” The agency was like, “No, no, no.” They were weirded out about it. And I said, “But I would do that even if I wasn’t a model!” So I ended up doing it anyway. It was my first photo shoot.

WWD: You also modeled more recently in the Tom Ford campaign as a guy. What was that like?
E.L.: They were like, “You’re gonna make out with this girl [in the shoot].” At first, I was like, “What does she look like?” They were like, “Really?” So they sent a picture. I was like, “Yeah, she’s alright. I could do that.” [She laughed.]

WWD: How do male models treat you on set?
E.L.: It’s weird because girls are always supernice to me — [although] some girls are creepier with me than guys. But with the guys, it depends. They’re so stupid, all of them. I’m kind of a flirt sometimes, too, though, honestly.

WWD: Your versatility as a model enables you to embody feminine, sexy looks just as well, though.
E.L.: I would never dress like that personally. I would never walk in here looking like that. But it’s kind of like acting. Every time I’m on set, I never feel like myself. I just put it on, and I feel pretty. [She laughed.] For my parents, when they see manly pictures [of me], they’re like, “Oh, yeah, that’s Erika.” But when they see the super girly ones, they’re like, “Is that you?!’”

WWD: Tell me about your new unisex line.
E.L.: I had wanted to launch a unisex line for like a year. My friend in L.A. was like, “I’ll run the business and you will be the face of it.” We came up with a few things like hoodies, beanies, snapbacks, baseball shirts — very plain stuff. I’m having fun with it. Things are still in production, but people have been ordering it from Australia, Hong Kong and Sweden.

WWD: And you play music, too, right?
E.L.: I’m modest about it. I haven’t put anything out. I play guitar, drums and piano. And I sing. I’ve been writing songs since I was six years old. I have a stack of lyrics back home. The thing with it is: You hate being judged. I would put something out if it wasn’t my name. It’s so dear to me. It’s like — “Don’t judge me, please.” One day, maybe.

WWD: You modeled in Louis Vuitton’s fall show. How was that?
E.L.: I wasn’t nervous, but my feet hurt. The shoes were two sizes too small; better that than too big. That’s life, though. It was good for me to do something like that. I always tell the agency that runway [modeling] is not my thing… but Nicolas [Ghesquière] was like, “I want her in my show.” And I was like, “OK!”

WWD: Are you happy with the path that your career has taken thus far?
E.L.: I remember the first thing that I told my agency was, “I’m not here to be a sell-out.” I’m just here to be myself. I don’t want to change. They wanted to change my name to something more boyish, and I was like, “No. Relax.” It’s never gonna happen. In the beginning, I could’ve changed my whole personality and become this image. But I would never do that. I’m just me.

WWD: Have you come across people with close-minded attitudes about who you are or what you do?
E.L.: Nah, not even my 80-year-old grandma. She’s so down with it. The thing with me is I’ve always been like this, and I’ve always been a loner. People may have been bullying me [behind my back], but I don’t really know. Of course kids can be mean. But that s–t doesn’t affect me. I’m sure people have said stuff, but I’m just like, well now I’m where I am.

WWD: What are your thoughts on Instagram in relation to your career? You have a pretty huge following there.
E.L.: If I was a photographer I would definitely look at a model’s Instagram. When you go to castings now, they’re like, “How many followers do you have?” Things are changing and it’s fun to be a part of it, but at the same time, sometimes I just want to throw my phone away. I freak out with more people following me. I post less stuff now that I have more followers. I can never in a million years today post a selfie. It just freaks me out, all the attention. I always make fun of it and say I‘m gonna take a picture of my toe and post it. Should I do that? I’ve been thinking about it for so long. I think that everyone should post a picture of their toe.

WWD: What are some of your goals?
E.L.: I wanna do movies, I wanna do music when I’m not shy about it….I love outdoor stuff. I want to go to Yellowstone. But for me, at the end of this whole crazy thing, I just want to get a house in Sweden somewhere in the countryside with my dogs. That’s it.