France has the highest female representation at 46.4 percent for companies on the CAC 40.

Ten years ago, when French headhunter Floriane de Saint Pierre decided to delve into diversity — or more accurately, the lack of it — on the boards of fashion companies, she said investors were not much concerned. Nor were boards of directors interested in self-assessments or benchmarks.

“Homogeneity in the boardroom was still the norm: Same gender, same age, same nationality, same or similar education, and most of the time members had only finance or banking expertise,” she recalled. “There was a lack of industry knowledge. The purpose of the board was strictly financial. I couldn’t understand how boards with those qualifications were making such important decisions. It was a call to action.”

So she plowed ahead, self-financing her Ethics & Boards project — and foreshadowing the growing industry and public conviction that company leaders should reflect the diversity of the customers they serve.

“Boards must be designed to help build sustainable and inclusive growth,” she said in an interview. “This includes making sure the company has a purpose and its board is equipped to monitor ESG [environmental, social and corporate governance] at 360 degrees.”

De Saint Pierre’s initial focus was female representation, and the data she collects indicates steady progress in this regard.

One of her first studies found that women accounted for 19.1 percent of the corporate boards across a sample group of fashion firms: 45 public companies in nine countries. 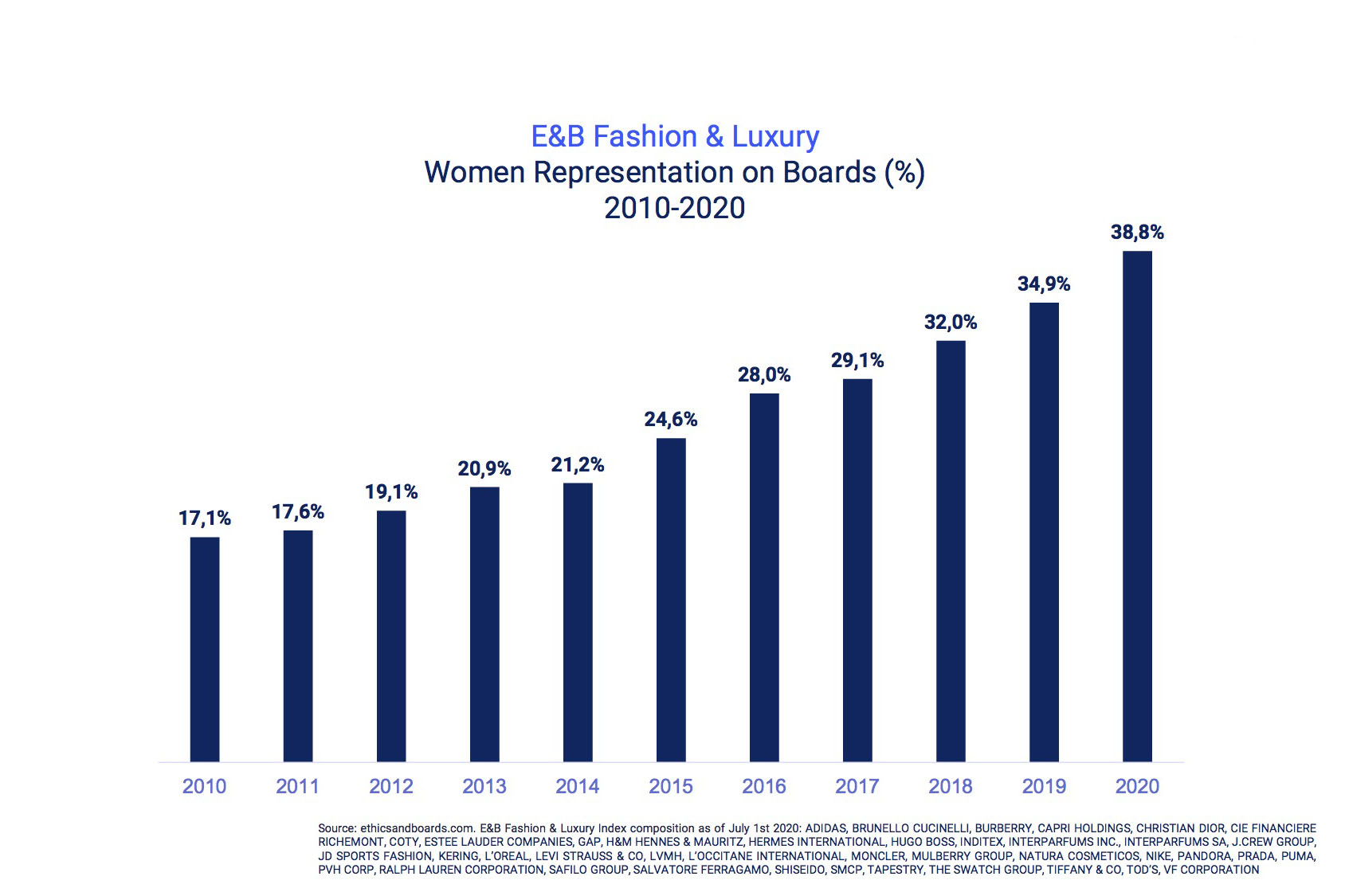 Already in 2010, fashion and beauty companies showed a better track record of electing women to their boards than other sectors because many were founded by women and targeted female consumers, she explained at the time.

Her most recent tallies, made last month, shows that France has the highest female representation at 46.4 percent for companies on the CAC 40. This is due largely to a quota law, introduced in 2017, requiring that women represent at least 40 percent of the boards of large companies within a certain timeframe.

The average female representation for the Ethics & Boards Fashion & Luxury 40 Index, composed of the 40 largest listed companies in the sector worldwide, now stands at 38.7 percent.

“This excellent figure is largely due to the fact that French luxury groups and companies, by law, must have at least 40 percent of each gender at board level,” she said. “Forty-five percent of the index has at least 40 percent women on boards, while six companies out of 40 have 25 percent or less. Interparfums Inc. and L’Occitane International have only 10 percent women on their boards.”

The figures drop when it comes to executive committees.

As of July 2020, the Ethics & Boards Fashion & Luxury 40 index shows women account for 27.8 percent of executive committees or management boards.

Companies considered best in class — with at least 40 percent female representation on executive committees — include H&M Group, which has a woman chief executive officer, Helena Helmersson; Capri Holdings; Tiffany; SMCP, and The Estée Lauder Cos. Inc.

But 13 out of the 40 companies have no women on their executive committees. These include Compagnie Financière Richemont, Hugo Boss, Interparfums and Adidas, proving there is still work to be done, she said.

Asked if her research has found any clear correlation between female board representation and company performance, de Saint Pierre said “we need a few more years to establish a correlation” given that female representation on executive committees only climbed about 20 percent this year in France.

“All over the world, female ceo’s are an absolute minority,” she said, citing only 10 in France among the 120 largest listed companies.

Her data continues to show that when a woman heads a fashion, beauty or retail company, the percentage of female board representation tends to jump, flying in the face of the stereotype that women do not promote their own.

“We see in France that women ceo’s in the SBF 120 [a stock market index] have female representation on the executive committees that is 25 percent higher than the index average,” she said.

Meanwhile, for the Ethics & Boards Fashion & Luxury 40 index, the average female representation is above 40 percent at the three companies with female ceo’s that disclose the composition of their executive committees.

Ethics & Boards tracks data worldwide, but because it is based in France, it is against the law to track data on race or sexual orientation.

Over the past decade, the Ethics & Boards Fashion & Luxury 40 shows that directors are getting slightly older (59.7 years old versus 58.3), come from different nationalities than where the company is based (31.1 percent versus 23 percent), are more independent (62.4 percent versus 54.7 percent) and stay in their roles slightly longer (nine years versus 8.4 years).

Again citing her Ethics & Boards Fashion & Luxury 40 Index, only 35 percent of companies have a committee at the board level in charge of CSR and/or sustainability.

“A very interesting finding that is key to investors is that 57 percent of the companies that have a CSR and/or sustainability committee are family-controlled business, namely Hermès, Inditex, Kering, LVMH, L’Oréal, Moncler and Ralph Lauren,” she said, noting that European family-controlled businesses were the first to link CSR or environmental objectives to their executive compensation.

In her view, “nothing would have happened without governments. Soft laws were and are instrumental as well. Now investors and asset managers are pushing ESG, but their own governance is far from being best in class.”

“I believe in sustainable and inclusive capitalism, based on ESG governance,” she said. “Our purpose is to help all stakeholders make informed decisions.”

While conceived as a business-to-business platform with a subscription-based business model, Ethics & Boards will soon allow students and job seekers — who increasingly scrutinize the environmental and equality credentials of companies — to access its ESG governance data.

She noted she is contemplating a funding round to accelerate development at Ethics & Boards as a data firm and solutions provider.

“Coming from a finance background, I have a passion for data, dashboards and quantitative tools that help measure and make grounded decisions,” she said. “I always have in mind that good governance concerns all stakeholders: issuers, investors, governments, regulators, consumers — everybody.”