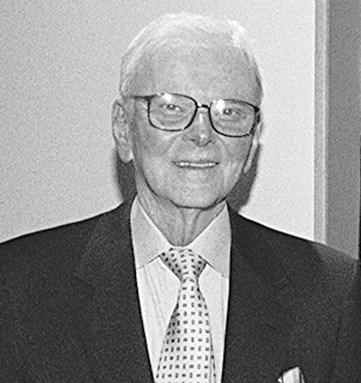 The company did not reveal a specific cause of death, but noted it was of natural causes.

The native Cuban, who was instrumental in turning Americans on to luxury timepieces starting in the Sixties with brands such as Corum, Piaget and Omega, had announced plans last fall to step down from his post Jan. 31. His son, Efraim, will take on the role of chairman, while continuing on as president and chief executive officer of the firm, which has annual sales of $560 million.

The elder Grinberg long had an affinity for timepieces, telling WWD in October: “Watches measure time, and I have always been fascinated by what a person does with their time.”

Grinberg entered the business by selling alarm clocks in Cuba until he fled Fidel Castro’s regime and moved to Miami, where he became a community fixture. Soon after emigrating to the U.S., Grinberg began dealing in more serious timepieces along the lines of Omega, Corum and Piaget. In 1965, he founded the North American Watch Group, now known as Movado Group. Concord and Ebel were later acquired by Movado.

One of the defining moments in Grinberg’s life was reading Vance Packard’s “The Hidden Persuaders,” a book on how people’s thoughts and feelings are manipulated by business, media and politicians. Americans in the Sixties were not privy to the world of Swiss timepieces like Europeans were; they wore more utilitarian styles such as those from Timex. It was all about function, not so much fashion or status. Grinberg saw an opportunity to grow the fine watch business.

“[Packard] used the model of Cadillac because Mercedes and today’s other luxury brands had limited availability,” Grinberg regaled in October. “He said we were developing a higher-income market and the people in this market needed products to show their new status in life. A Cadillac in the driveway was a symbol of their new status.”

As a result of his newfound knowledge, Grinberg began to advertise and grow Piaget from $175,000 in sales to more than $30 million in sales in luxury watches in the Eighties.

An avid art collector, Grinberg made art a part of his life and work. He became a close friend of artist Andy Warhol, with whom he traded Corum watches for artwork. In addition to the sculptures and canvases that stud the company’s headquarters, Grinberg took much pride in an assortment of 250 kitschy cookie jars Warhol collected.

One piece of design became the company flagship’s icon: the Museum dial. Grinberg took an instant liking to Nathan George Horwitt’s Bauhaus-inspired Museum Watch. The revolutionary dial was without markings except for a dot at the 12-hour mark. But it wasn’t easy to get the design rights from Horwitt, Grinberg once exclaimed.

“I wanted this watch in my collection very badly,” he said in 2008. “I was obsessed like a little child. However, it belonged to Movado….It took me almost 20 years to get the company.”

Movado celebrated the 60th anniversary of its iconic style in 2007. Grinberg also tapped favorite artists such as James Rosenquist, Arman, Max Bill and Warhol to design watches for the firm’s Artists’ Series.

Through Movado, Grinberg also supported several prestigious cultural institutions such as Lincoln Center, the John F. Kennedy Center for the Performing Arts and the American Ballet Theatre. He was also a patron of TimeSculpture at Lincoln Center, designed by the architect Philip Johnson.

Movado has recently revamped two brands in its roster, Ebel and Concord. Both are going more upscale and exclusive. Concord has gone to doing only mechanical movements with prices as high as $320,000, and Ebel also has some proprietary movements that are in demand by collectors.

“My father was a great man who touched many lives through his generosity as a business leader, a philanthropist and a patron of the arts,” said Efraim Grinberg. “He will be sorely missed by his family, his friends, employees and customers. My father’s entrepreneurial spirit, leadership and remarkable accomplishments led to his distinguished 60-year career, which was honored when he became the first recipient of a Lifetime Achievement Award from the Jewelry Information Center. He established Movado Group’s heritage as a brand builder with distinctive imaging across a powerful portfolio of brands and geographic markets.

“My father’s passion for the watch industry and for our business will live on. We will continue to apply the knowledge and wisdom that we’ve learned from him since starting our company in 1961 as we remain focused on positioning Movado Group as a leader in the watch industry.”

Before his death, Grinberg saw the trying economy as both a problem and an opportunity.

“Every crisis brings new creativity and we will see this happen, as in the past,” Grinberg said. “In recent years, highly complicated mechanical watches have become very important and successful in the watch industry. We have a company that covers many segments of the market and have brands that we develop in the field. This business is important worldwide because in many markets people buy extremely expensive products as a hedge against inflation, and so far, we are doing well in this market.”

In addition to Efraim, Grinberg is survived by his wife, Sonia; another son, Alex, who is president of Concord; a daughter, Miriam Phalen, and six grandchildren.

A memorial service will be held Wednesday at 12:30 p.m., at the Park Avenue Synagogue, 50 East 87th Street, in Manhattan.