Neil Kraft and the Spirit of the Moment

When it comes to creating eye-catching brand campaigns, he has a knack for the knock-out. 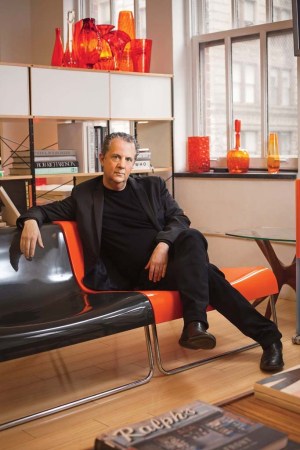 Neil Kraft is the rare individual who combines true creative expertise with business acumen. In his work with the likes of Barneys New York, Calvin Klein, Coty and Elizabeth Arden, he has created campaigns that transcend advertising to become cultural phenomena. Who can forget a naked Kate Moss lying languidly on a couch for Klein’s Obsession or frolicking topless with Marky Mark to sell blue jeans, to name just the most famous examples. Kraft is known for being as direct as he is directional. Here, during a recent conversation in his SoHo office, which is dominated in equal parts by stacks and stacks of art books and eye-popping orange office accessories, Kraft opens up about defying conventions in a world resistant to radical change.

Can you describe what you do? How do you see your role?
My father used to call me and he’d go, ‘Do you take the pictures?’ And I’d say, ‘No.’ He’d say, ‘Do you write the ads?’ And I’d go, ‘No,’ and he goes, ‘So then what is it that you do do?’ [laughs] What I do is try to create beautiful things and create something simple and meaningful that will break through. The hardest part of my job is trying to create things that break through with clients who don’t always want you to break through.

Are most clients reluctant to push the creative envelope?
In our business, you’re only as good as your clients. When we did CK One, it was the cosmetics company, which at the time was owned by Unilever, that was pushing us to break all the rules, not Calvin. That created ground-breaking advertising. We still get people who come in and say, ‘I want to do CK One’ or ‘I want to be Gucci’ and I ask, ‘Are you willing to change everything?’ It doesn’t happen overnight.

Are people willing enough to take risks today, and does reward necessarily follow?
There are people out there who take risks. One of the things that is interesting about Elizabeth Arden is that they are questioning the basic precepts of beauty advertising. That is more rewarding than doing a straight beauty ad. But on the whole, when the economy is bad, as it has been, people take less risks. If you look at the advertising, you can see the testing. The basic thing that is going to come out of any testing procedure is that customers want to see themselves. That can be done well, in the way that Dove does it. Or it can be done poorly. If you see a foundation ad, there’s four different people in the ad—there’s a white model, an African American, an Asian and a Latina. That comes from testing.

Are we overreliant on testing?
Advertising in general is overreliant on testing. What did Henry Ford say—if we asked people what they wanted we’d be riding around in horses instead of cars. To some extent that’s true. Testing is valuable for getting a sense of what’s going on in the world. For example, on CK One, we tested the concept, and learned a lot about how that generation spoke to each other and related to each other, and that’s what the campaign was about, but we never showed them the campaign.

You’ve been involved in some seminal moments in the worlds of fashion and beauty. Which stand out?
The thing that changed a lot for me was Obsession at Calvin Klein. Obsession was an existing fragrance, but we were trying to figure out where to go next. That’s when Patrick Demarchelier found Kate Moss. The layout originally had a picture of Vanessa Paradis, and we couldn’t get her. Patrick said, as only he can, ‘This girl, Kate Moss, she is almost the same. She will be fine.’ Of course, once we saw her we loved her. And to be allowed to run a picture of her naked on a couch— that was the first time I was given utter freedom.

How have you seen the role of creativity evolve?
It has become more democratized. It’s so easy to do, in a way, it somehow starts to lose its value, because it’s so pervasive in our culture and media is so easy to create. When I was first an art director, you had to cut out pictures and cut out type and figure out what it was going to look like and send it to a typesetter. It was a lot harder. It’s just really easy now. Therefore, because everyone has access to the same tools, you have to try harder.

In this supersaturated, overcrowded market, what is attention grabbing today?
It’s much harder to shock people now. The Internet has not only democratized things, it’s opened up the world to everyone. You have to find a way to start a dialogue with the customer and listen to them and engage them on a social level.

How have you done that successfully?
With the Taylor Swift fragrance, for example, instead of just doing a commercial, we created a movie that we rolled out in bits. We were able to leverage her millions of Facebook followers by showing a part of Taylor they hadn’t quite seen yet. It was a fantasy.

Celebrity advertising has to be real to the person. Taylor’s life is so open that if you did an ad with something that didn’t feel right for her, people wouldn’t react to it. Celebrities today are not Elizabeth Taylor, who had this incredible mystique. You knew she was with Richard Burton, but you didn’t know the details of her life. In a way, those people were more malleable.

Are you seeing more creativity today in product, packaging or communications?
The most interesting stuff is coming out of the interactive world, because you can tell a much longer story. There is nothing wrong with print, but it’s going to be two-dimensional.

That being said, a TV ad campaign is three- dimensional, and you said after you watched the Grammy Awards you were struck by the homogeneity of the 30-second beauty ads.
There are two types of spots. The hair spot, where the girl always has perfect hair that falls in a shiny cascade. Then there’s [skin care] and when you go beyond [makeup], you start to get into the world of claims and the claims are just an arms race. I watched both, [and thought] does anybody believe this?

How does the message need to evolve?
It’s time for people to be honest. It’s time we said, ‘Look, we are not miracle workers. That’s not to say our product doesn’t work. But it’s not going to transform you into a radiant beauty.’ The girls in these ads went through five hours of hair and makeup and have been heavily retouched. That is where the backlash is coming from. The less real it becomes, and the better the technology becomes to make it unreal, the more people get unreasonable images of what can and cannot be done and the more disenchanted consumers become.

How has that impacted the new campaign you’ve created for Elizabeth Arden?
Arden has embarked on a five-year plan to turn the brand around. We’re trying to modernize the brand by using both the heritage and modernity together. The only job I ever got fired from was Arden in
the mid-Nineties. We were trying to do the same thing then, but they weren’t willing to go the whole nine yards—redo the packaging, the stores. Arden has now gone the whole nine yards. It’s very easy to change an image, but when the other consumer touch points don’t live up to it, you are in deep s–t. Creating a new ad campaign is not that expensive. Redoing all your stores is. You just saw that with J.C. Penney. Redoing real estate and physical packaging is an enormous undertaking and Arden has done that. Now we have no excuses. We have to show people what’s new about Arden. That was what
they didn’t do before—the important half of the re- branding.

How would you describe your management style?
I try hard to inspire people. There are times when I speak in shorthand and I think people understand but they don’t always. There is a difference between what I hope my management style is and what it sometimes is.

How do you manage creative people, who by nature aren’t quantitative and analytical?
It’s not easy. When you work with creative people, the motivations for what they say and why they do it are sometimes unfathomable. It is very hard to keep them engaged, and that’s what you have to try to do.

What do you look for when you hire?
Interactive has gone from zero percent of our business to 70 percent. That being said, my aesthetic is modern and beautiful. People with an interactive background have absolutely no idea how to make anything look good. People who can make stuff look beautiful have no idea how to do interactive. That’s where the rubber hits the road—to find people who understand both. It doesn’t happen every day. I wish it would happen more. It’s starting to.

What do you love about your job?
I love seeing the work in public. One of the great experiences of my life was at a sushi bar in L.A., when they put the Voss water bottle that I designed on the table. I’m not normally like this, but I was like, ‘That’s my bottle!’ That is just incredibly rewarding.

Neil Kraft graduated from the Rhode Island School of Design with a degree inphoto graphy. In 1982, he joined Barneys New York as senior vice president of advertising and marketing, where he helped transform the retailer’s image from a dowdy men’s suit emporium to a hipster downtown designer haven. A decade later he was appointed senior vice president of Calvin Klein, and in 2000, he created his own company: KraftWorks. Today, he serves as president and chief creative officer of the firm, which has a client roster that includes Elizabeth Arden, La Prairie and Voss, among others.