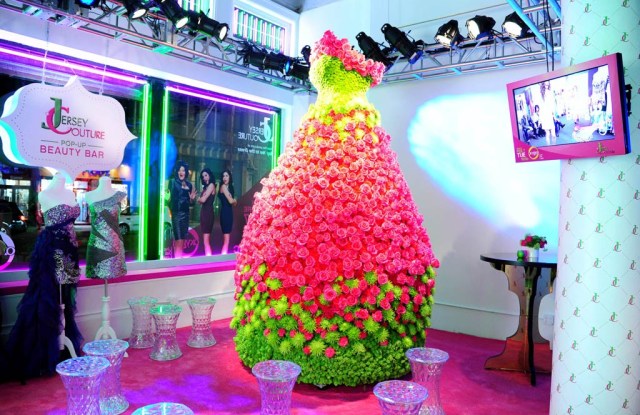 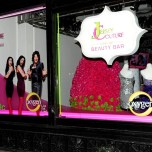 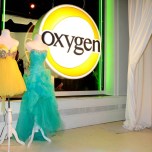 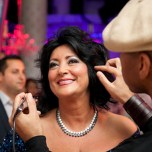 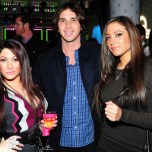 Manhattan got an eyeful of glitter-caked New Jersey style Thursday evening, when Oxygen Media promoted the upcoming second season of “Jersey Couture”, with nearly two dozen reality TV stars who sauntered down a sparkling yellow carpet. The event was designed to call attention to the Pop-Up Beauty Bar, located at 684 Broadway at Great Jones Street, that is free and open to the public until Tuesday.

The guest list included Deena Cortese and Sammi Giancola of “Jersey Shore,” Kelly Rutherford from “Gossip Girl” and Ben Flajnik from “The Bachelor.”

“Season two is all about family, fun, glitz, glamour and dresses,” said Kimberly Scali, one of the stars of the show, during a post-party interview with WWD. “You can’t get any more girly than our show.” The new season will start with two half-hour back-to-back episodes on Tuesday at 10 p.m.

For Kimberly and sister Christina Scali, who run Diane & Co. in Freehold, N.J., with their mother, Diane, beauty and accessories are critical pieces of a complete look.

“We surround ourselves with having the perfect nails, the perfect jewelry, makeup,” said Kimberly Scali.
Oxygen’s 3,000-square-foot “Jersey Couture” Pop-Up Beauty Bar features nail coatings by Minx; braids, feather and hair color extensions by Ricky’s NYC’s Revolver Salon stylists, and airbrush makeup makeovers by Temptu. Visitors can have themselves made up and also have their photographs taken in an on-site photo booth. For added flash, fans can customize “Jersey Couture” T-shirts at a bedazzling station, where glitter and crystal can be adhered to fabric.

“We thought about what was really so special about the show and how we could bring it to life and reward the consumer,” said Elissa Harman, vice president of consumer marketing at Oxygen Media. “We wanted to bring a little taste of Jersey to the Big Apple and partnered with amazing companies that [would provide a] glamorous, over-the-top, live-out-loud experience.”

The launch event, which also featured a performance by Salt-n-Pepa, who brought Bachelor Ben on stage during their 1994 hit song, “Whatta Man.”

“We pulled up to the store and my mom said, ‘Oh my God, who is this event for?,” said Christina Scali. “I said Mom, our pictures are everywhere! It’s for us. As soon as we walked in the door, we immediately got our nails done.”

Kim, who is married, has a two-and-a half year old daughter, Francesca, and 10-week old son, Lorenzo. Both will be featured on the show.

“When you see the taping of when I had Lorenzo, you couldn’t script it any better,” said Kim Scali about the upcoming season, which has been reformatted from a one-hour show to two half-hour shows. “Viewers are going to think, ‘There is no way it happened like that,’ but it did. My producer shot the birth, not the camera guy. We wanted a show that is real. How we are on-camera is how we are off.”

For both sisters, family is one of the key elements of their business and of the show.

“The kids are part of my life,” said Kim Scali. “I can help someone buy a $5,000 dress and then, seconds later I am changing a poopy diaper. This is the reality. We take care of our kids.”

Christina, who said she has lost 20 pounds since she shot season two’s promotional ads (to her chagrin), and recently dyed her hair a “fiery red,” has been in a relationship for over a year. She is also working on a cookbook, “The Young Business Woman’s Guide to Seducing Your Man in the Kitchen.”