As Paris Fashion Week kicks into high gear, the race among the French capital’s mayoral candidates rages on. 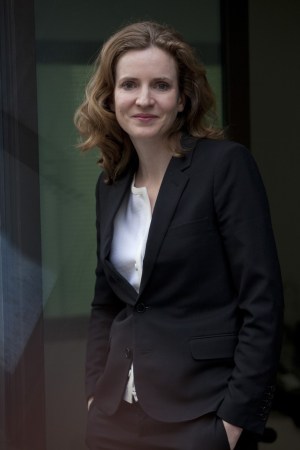 As Paris Fashion Week kicks into high gear, the race among the French capital’s mayoral candidates rages on.

The city’s two frontrunners, the Socialist Party’s Anne Hidalgo, the favorite, and right-wing candidate Nathalie Kosciusko-Morizet, both have strong political — and fashion — credentials. Where (and in what) the candidates will be seen this season in the run-up to the elections in late March is likely to send subliminal messages to voters, not to mention fashion industry executives.

A 40-year-old mother of two, Kosciusko-Morizet, better known as NKM, was the Environment Minister under former President Nicolas Sarkozy.

Born into a family of politicians — her grandfather was a French ambassador to the U.S. — Kosciusko-Morizet cannot easily be stereotyped. She is outspoken, even against her own camp, criticizing sexism in French politics and including many environmentally friendly projects on her agenda. Although she is from the conservative party, she married Socialist politician Jean-Pierre Philippe. Also, this graduate of France’s top engineering school has an artistic side: She plays the cello and enjoys oil painting, sculpture and needlepoint.

Kosciusko-Morizet is multifaceted fashionwise, too. Her Hermès boots created a polemic in 2012 when the French weekly Le Point reported that they cost more than 1,700 euros, or $2,335 at current exchange. (When asked if she still wears them despite the controversy, she told WWD: “Of course, I won’t throw them away. Are you nuts?”) Previously sporting a classic style, she has over the past few months changed things up, wearing jeans, rock ’n’ roll looks and jackets by emerging designers and French contemporary brands like A.P.C. and Vanessa Bruno. She said her wardrobe includes a Brunello Cucinelli number as well as a goat-hair Afghan coat. (Also on the hair front, the strawberry blonde has evolved her look, saying goodbye to strict buns and hello to loose, wavy tresses.)

Some see her makeover as a tactic to push back against rival Hidalgo, a popular figure among Parisian “bobos” (the acronym for bohemian bourgeoisie). Hidalgo generally channels “normality” and discretion through her everyday style, which includes designer labels.

WWD: What place do the creative industries, especially fashion, have in your political agenda?

Nathalie Kosciusko-Morizet: The industry employs 50,000 people in Paris, out of 2.3 million inhabitants. That’s a big proportion. It means fashion isn’t only about the city’s image; it is a big employment topic. Fashion is very much anchored in both Paris’ activities and its identity, but there is competition — with New York following on Paris’ heels.

WWD: Which shows do you plan to attend this season?

N.K.M.: Last season, I attended the Céline show and Yang Li’s. I even bought two pieces at his showroom after. I am interested in emerging designers. I plan on going to Designers’ Apartment [the initiative supporting young French designers that’s backed by the Chambre Syndicale] on the 28th and to Vanessa Bruno’s show [the same day]. I have a lot of sympathy for her as a person. She is a great example of a successful path. And, I love her clothes, which I wear.

WWD: What are your favorite outfits on the campaign trail?

N.K.M.: It is complex. You have to pick an outfit for very different activities. In the same day, you speak at a conference in front of industry people; you go to a TV show, and you do door-to-door, with staircases to climb. You have to be creative to make your outfit compatible. I always have a least three pairs of shoes at the office with different heel heights, so that I can switch.

I tend to have pairs of shoes everywhere. And I keep them for a very long time. Look at these, they are 10 years old [pointing to a pair of Céline pumps].

WWD: What do you have in your wardrobe?

N.K.M.: A lot. I keep everything. I could tell you I only keep the beautiful pieces, but the truth is I keep everything, including holey sweaters. I just have a hard time getting rid of old clothes. I link memories to clothes. I have striking pieces like this Afghan coat I bought at the Ethical Fashion Show that I wore during a previous campaign. When I was Minister of the Environment, I participated in the creation of that show, and I was very involved in ethical fashion and social responsibility in fashion.

This campaign is very much a “tailleur pantalon” [or “pant-suit”] campaign. After seeing you today, I will go to the subway, give out leaflets, and then go to the theater tonight. One time, a Saturday, there was the techno parade and Yom Kippur. I had to launch the parade, standing on floats, and go from synagogue to synagogue for Yom Kippur. Trust me, it was complicated to find the one outfit that would work for both. I found it: a long black skirt in the slightly Gothic trend. The Gothic style was perfect for the techno parade, and the long skirt, a bit strict — perfect for Yom Kippur.

WWD: You probably have a healthy diet during the campaign?

N.K.M.: Oh yes, I drink a lot and eat a lot of cheeseburgers. On Sunday, I went to the agricultural show for six hours. At each booth, you have to drink and they look if you have finished your glass.

WWD: Don’t you have a strategy for this type of situation?

N.K.M.: I bring a colleague with me, but then he ends up drunk. You have to change your “collaborator.”

WWD: Back to your election campaign: What will you do for the fashion industry?

N.K.M.: If Parisians trust in me, I will create a committee of industry experts, with which I will liaise constantly. Fashion isn’t a peripheral topic. For instance, I want the city to make some public facilities available. I want facilities that are under the public service delegation contract [the specific framework that allocates a municipal facility to a private entity] to open their doors during fashion week to designers [to stage shows, or use as showrooms]. I am thinking of places like La Gaîté Lyrique, [a digital arts and modern music center], and the Centquatre [artistic center], but we can imagine other establishments as well, and would take advice from the committee on that. We would implement [the clause] when we renegotiate their contract.

Also, I want to create a fashion export bureau, an organization that accompanies designers toward their international development. Paris needs a strong arm to help young designers get corners in department stores and help them with their p.r. Fashion press is specific. When you aren’t ultraspecific, you miss the target.

WWD: There is a controversy in France over retailers’ opening hours. What is your position on that?

N.K.M.: I want retail to be open on Sunday. It is a major difference with other candidates. I want to widen open areas to Rue du Faubourg Saint-Honoré, Avenue Montaigne. It is absurd that Chinese tourists wander around on Sunday and wonder why stores are closed. I want [it to be] open around department stores and the Grands Boulevards. My project is to share a new energy with Parisians and switch to a more 24/7 mode, in line with all big capitals.

N.K.M.: Yes, that there are impressive developments in the men’s fashion area. Paris is lagging behind, missing opportunities, letting British and Italian tailoring take the lead. I want to give more luster to men’s fashion week. I advocate men’s rights.

WWD: What do you mean by that?

N.K.M.: [laughing] For men’s rights to be elegant, and for women to pass by elegant men.