He was also known for his public and private involvement in the arts, and was a major figure on both the retail and the art scenes.

By Lorna Koski and Marcy Medina on February 26, 2015
View Slideshow 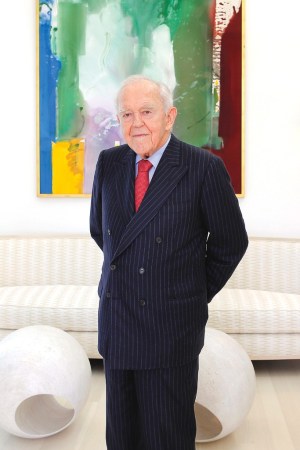 Developer and philanthropist Henry Segerstrom, 91, who was a creator of South Coast Plaza in Orange County, Calif., one of the most successful shopping centers in the country, died on Feb. 20 at his Newport Beach, Calif., home after a short illness. He was also known for his public and private involvement in the arts, and was a major figure on both the retail and the art scenes. Behind his achievements was a vision that he had early on, that Orange County could be a destination in itself for shopping and the arts, and not a stepchild to Los Angeles.

Segerstrom’s paternal grandparents, Charles Johan and Berthe Segerstrom, emigrated from Sweden in the 19th century, leasing, then purchasing, the first farm that would eventually become part of a much larger landholding of 2,100 acres in Orange County, Calif., which would make the family firm, C.J. Segerstrom & Sons, the biggest privately held producers of lima beans in the United States.

Henry was born in Santa Ana and attended Santa Ana High School. He enlisted in the Army at 19 shortly after the bombing of Pearl Harbor. He received the Purple Heart, the European Theater of Operations Medal with Battle Star and the Good Conduct Ribbon and attained the rank of captain. He was severely injured, and he was returned to the U.S. He was treated for his injuries and for the bone disease osteomyelitis for the next two years, and learned to write with his left hand, since his index finger on his right hand had been torn off in an explosion. As he put it, “I was very lucky in the fact that they put me in a hospital near Stanford so that I was able to get on with my studies.”

He got an M.B.A. from Stanford Business School in 1947 and joined the family business the next year. At the time, they were only involved with agriculture.

In 1950, though, the freeway had opened in Santa Ana, and the family was approached about acquiring some commercial property in Santa Ana, then the top city in Orange County. They built a seven-story building, the first in the city to feature central air conditioning.

When the Segerstrom company first developed the South Coast Plaza, the anchor tenants were Sears and the May Co. Later came Bullock’s, I. Magnin, Nordstrom and Saks Fifth Avenue. Then Segerstrom, who had become managing partner, brought in the center’s first luxury retailer, Courrèges, followed by Yves Saint Laurent and Mark Cross. He had help from his cousin Hal, until he died suddenly in 1994, but Henry was the most involved. “I put in most of the work,” he said, “but that’s my passion — to such a degree that I’ve dropped my business cards all over the world.” The idea from the beginning was to house luxury stores and boutiques and for the center to become an international destination.

Segerstrom was always conscious of the competition, which included Fashion Square and Fashion Island malls in, respectively, Santa Ana and the area that would become Newport Beach. “The first concrete support we had was a commitment by Tiffany to open a store with us because no other luxury retailer had yet verified that Southern California, which was now 20 million in population, was a viable market,” he recalled. In 2013, the SCP unit was Tiffany’s second-best performing store after New York.

He said, “The philosophy is, the more exclusive and unique the retailer, the greater distance people will come to visit it. Consequently, we draw from a 100-mile radius. Most centers will draw from a seven or 10-mile radius. About 35 percent of our business is from tourists. The reason they come to South Coast Plaza is not only because of the environment we have created, but also the unique stores.”

Even as the Great Recession hit, luxury remained the organizing principle of South Coast Plaza. Harry Winston, Christian Louboutin, De Beers, Oscar de la Renta, Canali and Rolex were a part of it. Newcomers in 2012 included M. Missoni, Red Valentino, Jaeger-LeCoulture, Barbara Bui and IWC Schaffhausen. Lanvin opened a store in 2013. South Coast Plaza has 280 shops and is visited by 22 million visitors a year, who spend a total of $1.7 billion there.

Segerstrom’s work with the arts involved purchasing and commissioning pieces from artists, particularly sculptors, including Isamu Noguchi, Henry Moore, Alexander Calder, Jean Miro and Jean Dubuffet, and often evolved into friendships with the artists themselves. “I remember I met Richard Serra at the reopening [of the Museum of Modern Art in New York] and I thought, ‘I better go talk to him because my husband would like one of his pieces, and I might never get to meet him again,’” said Segerstrom’s wife Elizabeth. “Well, I went away to get a drink and they must have exchanged numbers, because we got home, and at 3 in the morning the phone rang, and it was Richard.”

The Segerstrom Center for the Arts is the county’s biggest nonprofit arts organization. It owns and operates the opera house-like Segerstrom Hall, which seats 3,000; the 500-seat Renée and Henry Segerstrom Concert Hall; the Samueli Theater, which seats 500; the 250-seat Founders Hall, and the 46,000-square-foot Arts Plaza. The center’s international dance performances have included collaborations with the Bolshoi Ballet, the Mariinsky Theatre, the New York City Ballet, the Merce Cunningham dance company, and others. The world premiere of Alexei Ratmansky’s “Firebird” by the American Ballet Theatre was celebrated in spring 2013, the 23rd collaboration between the two organizations.

In the Sixties, leaders of the community in Orange County decided that it was time for the area to have a top-quality performing arts venue. The Segerstroms donated a 5-acre site for the arts complex, and it was decided that the complex would be created entirely through private donations.

Segerstrom was married for 31 years to his wife Yvonne, with whom he had three children, and they then divorced. He married his wife Renée in 1981, and they were married until her death in 2000. He married his third wife, Elizabeth, later that year. Segerstrom is survived by her and his children, Andrea, Toren and Anton, their husbands and wives, six grandchildren and seven great-grandchildren. There will be a public visitation and tribute at Fairhaven Memorial Park in Santa Ana on Saturday.