In a strong testament to the wide net he cast and all those he mentored, his service was attended by about 1,000 friends, family and former colleagues. 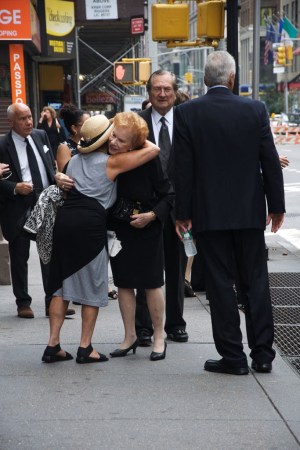 Marvin Traub was given a loving, sentimental farewell at his funeral Sunday at Manhattan’s Central Synagogue, where a handful of speakers captured his full and vigorous life.

Traub, who died Wednesday at the age of 87 after a long illness, was remembered for his family devotion, worldliness, his halcyon days at Bloomingdale’s, as well as his foibles. His coffin was draped in an American flag in recognition of being a decorated World War II veteran wounded during the Normandy Invasion.

In a strong testament to the wide net he cast and all those he mentored, Traub’s service was attended by about 1,000 friends, family and former colleagues, notably Ralph Lauren, Leonard A. Lauder, Terry J. Lundgren, Michael Gould, Roger Farah, Philip Miller and Stephen I. Sadove.

There were about two dozen top Bloomingdale’s executives, past and present, and scores of other retailers and Seventh Avenue figures who at one point or another in their careers worked for, or were advised by, Traub. They included: Brendan Hoffman, Jeffrey Sherman, Russell Stravitz, Richard Hauser, Terron Schaefer, Mark Shulman, Andrew Rosen, Glen Senk, Arnold Aronson and Denise Seegal. Other friends, colleagues and admirers on the scene were Lawrence Leeds, David Tracy, Michael Steinberg, Howard Socol, Walter Loeb, Maggie Gilliam, Gilbert Harrison, and Traub’s close associate and general manager, Amy Hafkin.

Traub spent 41 years at Bloomingdale’s, rising from a merchandise assistant to chief executive officer, a position he held for 13 years until 1991. He’s widely credited for catapulting Bloomingdale’s into one of the world’s most famous and innovative stores, and for determinedly creating a second career as a consultant and the industry go-to guy on a global scale.

His friend for 50 years, Mathew Gladstein, recalled Traub’s workaholic side, when on one hot July Sunday afternoon at Gladstein’s house, with kids splashing in the pool, Traub suddenly announced that he and his wife, Lee, had to get back to Manhattan. “I asked him why he was leaving,” Gladstein recounted, “and he said, ‘Martex Towels is having an opening.’ I said, ‘Who?’ He repeated Martex. Then he got up and left. His work ethic was incredible.

“The truth is Marvin possessed a naïvete that all his friends would share his pleasure in all things happening in his life,” Gladstein said. Nevertheless, he applauded Traub for building an unusually successful career. “He was a warrior [in business] without making an enemy, and was generous with his money and his time.”

“I was very lucky to have spent 10 years working with Marvin,” said Mortimer Singer, the president of Marvin Traub Associates. “For him it was just a short poem compared to his leviathan career.…People, places and products awakened something primal in him.”

Singer added that Traub taught him “innumerable things” yet the most memorable lesson was, “He taught me how to treat people, and to enjoy life to the very last minute.”

Also eulogizing Traub was one of his four grandchildren, Abigail, who spoke of how her grandfather instilled a love of traveling, remembering one trip to India, where Traub packed 12 members of the family into a big van and took them on an adventure driving the unpaved roads. Traub also ventured with the family to Africa, Asia and Europe. On another kind of adventure, Traub, at 79, took his grandchildren to their first rock concert. It was Lenny Kravitz, and Traub said he loved the music, though he wore earplugs, recalled Abigail.

“He had an amazingly busy schedule, but he always devoted time to his family,” said Traub’s daughter, Peggy, who cited some of the many things she shares with her father. “Lousy posture, an overdeveloped sweet tooth, lack of any culinary skills or domestic handiness, and a particular love of home furnishings,” she said. The most important piece of advice he ever gave her, she said, was, “Opportunities don’t fall into your hands. You have to go after them.”

“He was not a towering personality. Yet he cast a towering shadow,” said Traub’s son James. “That self-confidence and optimism made him such a force. He was a natural leader.” He also said his father would wear a tie to a football game just in case he ran into a Bloomingdale’s colleague. He was also a brazen name-dropper and that everyone would pretend to be interested in his father’s encounters. But he also said that the only woman who ever captured his father’s eye was his mother. “He didn’t know that other women were beautiful.”

“He found a way to love so many people,” added Traub’s son Andrew, and no one more so than Lee Traub. “There was never a birthday party or a holiday where he did not toast the love of his life.”