Renzo Rosso rescued John Galliano from fashion limbo and installed him at the creative helm of Maison Margiela last year. 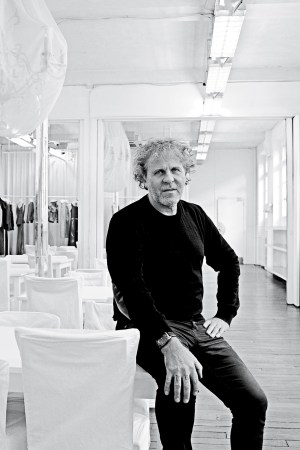 John Galliano is happy — and Renzo Rosso has visual proof.

The Diesel honcho, who rescued the maverick designer from fashion limbo and installed him at the creative helm of Maison Margiela last year, flicked through the camera roll on his iPhone and flashed a photo taken only an hour earlier. It showed Rosso with his arm around Galliano’s shoulder, the Englishman beaming in a baseball cap and a white lab coat, the quirky uniform at the house that Martin built.

This story first appeared in the October 21, 2015 issue of WWD. Subscribe Today.

Rosso, whose group OTB controls Margiela via a subsidiary called Neuf, was also in high spirits, for his daring hire is starting to bear fruit. Revenues are now advancing in excess of 30 percent, accelerating from the 10-15 percent clip of the past few years when the Maison was fueled by an anonymous team.

“It’s another company now. You can feel the energy inside, it’s unbelievable,” Rosso said in an exclusive interview at Margiela’s kooky showroom, where crystal chandeliers cloaked in white chiffon spin spookily overhead. “It was really necessary to hire someone for the next step because Martin was someone who changed the rules in the fashion industry,”

What’s more, Galliano’s couture background at Dior for 15 years is turning the Maison Margiela upside down, its couture collection now defining the image of the house, its innovations and ideas trickling down into ready-to-wear and accessories.

“That for me is totally new because before we just did the collection and tried to upgrade it and do something nice for the show. Here it is totally the opposite,” Rosso said. “Now with him, the fashion show comes first. All the rest is coming after couture. So thanks to John, I started to think and to work differently.”

Rosso said Galliano would gradually put his imprint on more product categories, including men’s wear starting in mid-2016. And he revealed that Galliano has started working on a new women’s perfume for Margiela to be released in 2017 by the company’s beauty partner, L’Oréal.

Sounding relaxed and upbeat, Rosso recalled how talks with Galliano about joining Margiela predated his appointment in October 2014 by about one year. The courtship included a Saturday night visit to Margiela’s Paris headquarters, previously an 18th-century convent that was repurposed as a industrial design school for boys, and its top-floor fashion archive.

“We had to drag him out because he didn’t want to leave,” the Italian industrialist related. “It was one o’clock in the morning, and he was so much in love with the house from that day. He told me, ‘Renzo, I cannot imagine that I could design clothing other than for Margiela. He started to be so inspired and in love with the spirit, the philosophy, and what this man had accomplished before.”

As contract talks neared their conclusion came a meeting of the two fashion creators, during which Margiela, the Belgian iconoclast, gave his blessing to the choice of Galliano, telling Rosso, “I’m so happy you chose a couturier to drive the maison.”

Margiela also delivered a liberating piece of advice to Galliano. “Martin said to John, ‘Make it your own,’” Rosso said.

Indeed, Rosso set no creative directive before Galliano other than to interpret the brand’s legacy and ethos as he saw fit.

Rosso said he also left Galliano free to be in the public eye as much as he wants, or to carry on the legacy of invisibility that Margiela himself forged. Often called the Greta Garbo of fashion, Margiela never gave interviews, took a runway bow, or allowed himself to be photographed.

No doubt this legacy is a balm to Galliano, who blamed the stresses and pressures of being a famous fashion designer for contributing to his substance abuse, and a spectacular flameout in 2011. Following a series of drunken altercations that year and racist and anti-Semitic outbursts, he was promptly dismissed from Dior and his signature fashion house.

The shamed designer ultimately was charged with public insult, with a Paris court sentencing him to suspended fines totaling 6,000 euros, or $8,400. At his trial, Galliano blamed work-related stress and multiple addictions for his behavior, and he dropped from public view, resurfacing only to create a wedding dress for Kate Moss and a three-week designer-in-residence role at Oscar de la Renta.

Calling Galliano one of fashion’s most important talents today, Rosso lauded his attention to detail, quest for quality, penchant for experimentation and the narrative he gives everything he designs.

He also cited the designer’s vision for a dress and how that extends to the model who wears it, her attitude and carriage, and even the music that might accompany her walk.

“It’s unbelievable because normally the other collections that you see, it’s just a bunch of clothing. But here, every single item has a story behind it. I think this is unique,” Rosso said. “I don’t know anyone like John, who spends hours and hours on a toile, on a fitting, or on very little details.”

Rosso characterized he and Galliano as kindred spirits.

“We fit also very well each other,” he said. “We are both very brave, we are very revolutionary. Also, I am very precise and John is very precise.”

Rosso’s OTB bought its majority stake in Margiela in 2002, seen then as an odd fashion coupling. And while the hubbub around Margiela died down since the founder made his exit in 2009 after celebrating the brand’s 20th anniversary, the company continued to make progress.

“The company was growing before John’s arrival, but with him on board, the goal will be higher. The potential is much more important,” said Margiela chief executive officer Giovanni Pungetti.

He noted that only one retailer stopped working with the brand because of Galliano’s drunken outbursts. The company ships its designs to about 350 wholesale doors worldwide.

Galliano’s first rtw designs arrived on racks in September and “it’s really starting to fly in the stores, and that’s really the best result we could want,” Pungetti said.

The executive touted “big potential” in women’s rtw, and also accessories, the latter category accounting for less than 30 percent of sales, the biggest chunk of the latter being footwear.

“We don’t want to become a bag company for sure,” he said. “But with bags accounting for a little less than 10 percent, we are missing a lot of opportunities.”

The current split between all women’s and men’s categories is 60/40, he noted.

The company also has scope to expand its retail footprint, with only 35 freestanding stores at present. And the brand is either absent or underexposed in some markets, particularly China and the Middle East, Pungetti said, citing Shanghai among chief priorities for a flagship store.

The U.S., Italy and Japan are Margiela’s most significant markets historically. Over the past year, it opened a third location in Milan, a Rome flagship and a San Francisco boutique.

Pungetti noted that the brand is actively looking to open additional locations in London, Paris and New York. It is also hunting for a larger location in Hong Kong, in line with its strategy to open bigger and more visible units, unlike the quirky destination locations of yore.

In 2014, the company generated consolidated revenues of about 100 million euros, or $132.9 million at average exchange rates, and is now entering an investment phase that could dent its profitability, according to Pungetti, describing capital expenditures on process and staffing, particularly in the couture and rtw ateliers, and in the accessories department.

Galliano declined comment for this article, pointing to the founder’s policy. And Rosso was adamant that Galliano’s freedom at the house extends to how he wishes to interface with the press and the public.

Indeed, at his first women’s rtw show for Margiela in Paris last March, Rosso himself wasn’t sure if the designer would come out for a bow.

“I was waiting for him to come out – everyone was chanting ‘John, John, John’ – and at the end I was very happy he didn’t. Now I understand that this was an incredible philosophy and strategy because he created more attention for the product than you can imagine. This is a very intelligent thing about John. John just wanted that the product speaks,” Rosso said. “Fashion is now full of people doing social networks, crazy things, just to make people talk. I don’t want to be part of this system. I just want the beauty and the dream. This is what I want him to promote: beauty and dreams.”