Retail and Art: Where A. Alfred Taubman Saw the Connection

The late A. Alfred Taubman had an eye for art, architecture and retail theater. 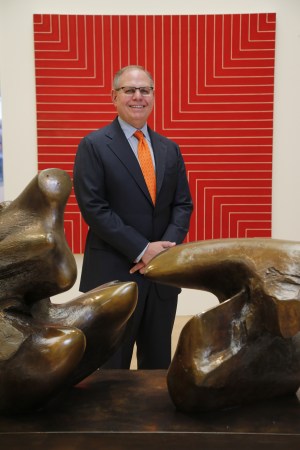 NEW YORK — “Step back here. You really want to look at this painting from a distance,” instructs Bill Taubman, as he shows a guest “The Great Florida Sunset” by Martin Johnson Heade.

“My father loved this painting. It was the focus of his living room at his home in Florida.”

It’s an afternoon at Sotheby’s on York Avenue in Manhattan, and Taubman, the chief operating officer of Taubman Centers Inc., is giving his first guided tour of his father’s eclectic art collection, ranging from an ancient Egyptian sekhmet, circa 1400 B.C., to an Alexander Calder wire mobile, “Two Red Petals in the Air.” There are also paintings by Raphael, Henri Matisse, Georgia O’Keefe, Mark Rothko, Edgar Degas, Jackson Pollock and Winslow Homer, among others.

The late A. Alfred Taubman largely kept his collection private, at his five residences in New York; Southampton, N.Y.; Detroit; Palm Beach, Fla., and London. Now it’s on public view and set for auction beginning Wednesday and into January.

Alfred Taubman, who died last April at the age of 91, was widely known as a visionary shopping center developer, entrepreneur and former Sotheby’s chairman who took over when the business was troubled and catapulted to world-class status. But he was convicted in a price-fixing scandal with Christie’s and served about nine months in prison. The presentation brings to light the magnitude of his collection, the impact he had on the art world and the connections he saw between retailing and art.

“He completely shifted the art world from a wholesale to a retail business,” says Taubman. Just as retailing, at its best, is regarded as theater, he continues, “my father understood the drama and excitement of an auction and how it would draw people.” Not only dealers and gallery owners came, but others who were passionate on their own about art were encouraged, making the auction a splashier, more public affair.

As chairman, he relocated Sotheby’s to York Avenue and 72nd Street, once a Kodak warehouse. It’s inspired by traditional department-store design, with the escalators situated right in the center.

Taubman also says that his father “was the first to put real contemporary art in the malls,” starting with maquettes in the Sixties. There is still plenty of artwork in Taubman malls that is not being put up for auction. The late Taubman also donated 25 works to the Detroit Institute of Arts, and the story of how his generosity, along with that of three other donors, helped the Whitney Museum of American Art acquire the famous Jasper Johns painting, “Three Flags,” is recounted by Leonard Lauder in the Sotheby’s catalogue. “I am not sure how many people realize that Alfred Taubman was a longtime and esteemed member of the board of the Whitney Museum of American Art,” Lauder writes.

Leslie Wexner, chairman and chief executive officer of L Brands Inc., also writes in the catalogue, focusing on when he first met Taubman 45 years ago. Wexner had a store in a mall owned by Taubman, who called to tell Wexner he hated the design of the store, not the merchandise. “He called it a blight,” Wexner writes. Shortly afterward, they met on a Sunday in Taubman’s house in Detroit. “I had never been in the house of someone who owned real art, and he had quite a bit,” Wexner writes. “I couldn’t believe what I was seeing. Subsequently, he invited me to breakfast and I met him in his art-filled apartment in New York. The astonishment continued. Over the years I got to know him better. I learned that Al had a tremendous eye for both architecture and art, whether it was classic or modern….His enthusiasm for art from all periods was almost boyish.”

Practically all of the Taubman collection is being put up for auction. Of the 500 pieces, about 300 are on exhibit. Sotheby’s has guaranteed the sale for $500 million to the Taubman family. Bill Taubman is one of A. Alfred Taubman’s three children, along with Robert, president and ceo of Taubman Centers, and a daughter, Gayle.

Strolling through the exhibit, Bill points to Modigliani’s “Paulette Jourdain” and says it could command the highest price in the auction, possibly $25 million to $35 million. “But it could be a de Kooning. You never know. It’s an auction.” Heade’s “The Great Florida Sunset” could garner $7 million to $10 million.

At Frank Stella’s 1962 “Delaware Crossing,” Taubman says Stella used a can of Benjamin Moore for the painting. A Henry Moore sculpture is displayed just in front, similar to how the two pieces were displayed at Taubman’s home to create a context for each other, contrasting the geometry of Stella to the amorphous, sensuous character of the Moore sculpture.

In the late Sixties, Taubman would ride with his father in a black limousine through the potholed streets of SoHo to visit the few galleries there at the time, like Leo Castelli and Ivan Karp, and they would complain there were no good restaurants in the neighborhood. But the gallery owners banded together and opened a Chinese restaurant. “He loved going down to SoHo to visit the galleries. In those days, nothing was expensive. What he purchased then seems like nothing today.”

When Taubman turned 18, his father gave him $5,000 to purchase a work of art in New York. He was clueless where to shop but got a copy of a gallery guide and ended up at Pace Gallery on 57th Street at a show for Chuck Close. A drawing of Philip Glass caught his eye and he bought it, but not before needing another $2,000 from his father.

Asked if the family was sad to see the collection get sold, Taubman says, “Not really. We each have our own collections.” It’s also an equitable way to distribute his father’s assets to the family, he adds.

“It’s what my dad would have wanted. The only sad thing is that he won’t be here to see this. It celebrates his aesthetic and his vision. He never had a curator, but he loved faces, and he was an architect so he had an architectural view of how he looked at things. There’s a real geometry in many of the paintings. He always looked at art as a result of an artist trying to work out a problem, an intellectual idea.”