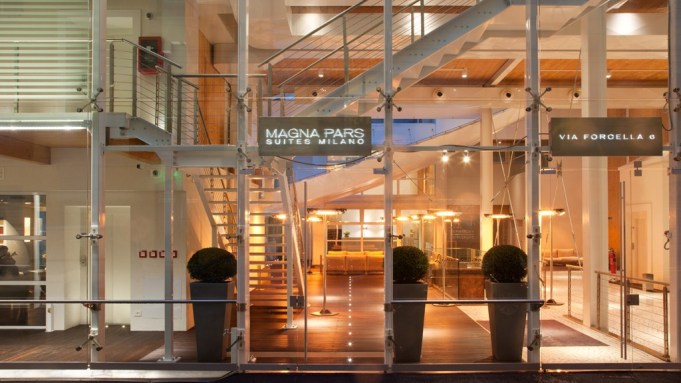 MILAN — The year is shaping up well for Roberto Martone. The president of Industrie Cosmetiche Riunite sold 60 percent of his affiliated company Italian Fragrances to Gruppo Angelini early this month, before picking up four awards on March 8 at the Accademia del Profumo for ITF’s Trussardi My Land fragrance. The men’s eau de toilette, which hit stores last September, received prizes for best olfactory creation, best fragrance made in Italy, best fragrance from an Italian brand and best packaging.

But Martone has also been busy with a new, more unusual project: In late January, his family’s refurbished old perfume factory opened its doors as a five-star hotel on Via Forcella, in the city’s design-centric Tortona area. Since the opening, the hotel has had an average of 70 percent of its suites occupied, and it is fully booked for Milan’s upcoming design week.

In an interview on site, Martone said he and his relatives had been discussing the property’s transformation for several years, and were keen to give the Magna Pars Suites Milano a unique identity linked to the family business, which goes back three generations.

“Since this building is tied to our history, we wanted to tie it to our world of perfumes. That’s where the idea of calling it a ‘hotel à parfum,’ a distillation of Italian excellence, came from,” Martone said.

In 1987, Martone and his family moved their fragrance production to a plant in Lodi, outside Milan, but they remained owners of the old factory. In 1991, they opened the Magna Pars convention center in Via Tortona and rented out part of the former production space in Via Forcella. As rent contracts expired, Martone decided not to renew them and instead to focus on building a hotel.

Outfitted solely with wood from European conifers, steel and crystal, the structure’s hallways preserve the old factory feel, though the immaculate white walls — as well as the thermal and acoustic isolation of wood panels connected by aluminum nails — signal a transition to luxury. Twenty-eight suites are spread across three floors overlooking a garden composed of plants used in fragrances, from pyramidal hornbeams, maple and magnolia to ferns and olive trees. Hotel rooms are named for scents, while the Liquidambar Lounge bar takes its name from the trees chosen for their colorful foliage and strong-scented resin.

The hotel suites, which cost between about 400 and 1,000 euros ($500 to $1,278) a night, range from 592 to 968 square feet and are equipped with furnishings, lamps, bathroom amenities and other structural details exclusively made in Italy, from brands such as Poltrona Frau, Flos, iGuzzini and Kartell. Martone’s daughter Roberta Martone, marketing director at ICR-ITF, reprised the style of porcelain jars used by the family’s defunct Marvin pharmaceutical brand to create the “Aqua Adornationis” bottles of shampoo, conditioner and shower gel found in each suite’s bathroom. “The inspiration comes from the labels on the old jars,” she explained.

“It would be fair to say that the whole family was involved in this project,” noted Roberto Martone.

Those with an eye for art will appreciate the contributions of Milan’s Accademia di Brera alumni lining the walls of each suite, with works commissioned especially for the hotel. Shelves are lined with old tomes collected from antique booksellers throughout Europe.

The restaurant, Da Noi, in Via Forcella 6, relies on seasonal ingredients for northern Italian cooking by chef Fulvio Siccardi. Up to 80 guests can sit inside, where the walls are lined with images of lavender fields, and an additional forty can sit outside overlooking the fragrance garden. Both the restaurant and the bar are open to the public.

A 3,229-square-foot rooftop deck, partially covered and overlooking an old ringhiera-style palazzo, will be available for private events, while a gym equipped with Technogym equipment and a spa area for steam baths and massages are reserved exclusively for guests.

Martone said the lounge-bar aimed to attract a mostly Milanese crowd, while the hotel anticipates that more than half of its guests will be foreign, with many of them connected to the fashion and design sectors.