Wall Street reacted positively to the news of the top-level change and on Tuesday pushed the department store chain’s stock up $5.26, or 17.5 percent.

By David Moin and Evan Clark on June 14, 2011
View Slideshow 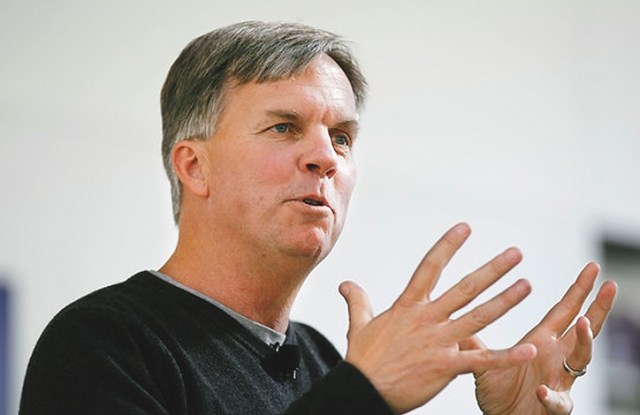 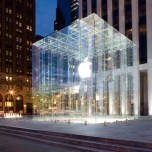 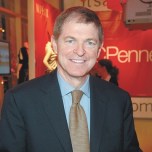 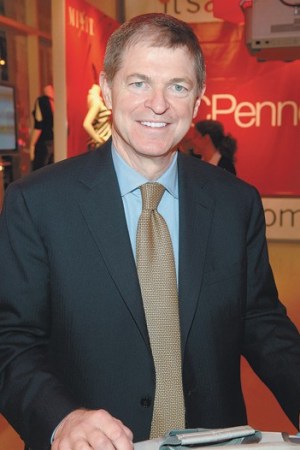 Johnson will succeed Myron E. “Mike” Ullman 3rd as ceo, while Ullman will remain at Penney’s as executive chairman. Johnson will also join Penney’s board on Aug. 1.

Wall Street reacted positively to the news of the top-level change and on Tuesday pushed Penney’s up $5.26, or 17.5 percent, to $35.37 on volume of more than 47 million shares, over 12 times the daily average.

Johnson, 52, has served for 11 years as senior vice president of retail at Apple Inc., where he orchestrated the brand’s fast-paced, innovative and highly productive retail strategy from its inception in 2001 to more than 300 stores currently in the U.S. and abroad. He’s got another 30 Apple store openings ahead of him over the next three months, including the first in Hong Kong, and a commitment to help Apple transition some new leadership in light of his departure.

As for why Johnson would leave one of the hottest companies in the world to join the midtier Penney’s, sources cited the appeal of running a very large enterprise, with Penney’s close to $18 billion in sales though still under prerecession volumes, with potential for growth and for elevating the image to attract younger customers. Johnson is also expected to drive Penney’s Web presence, introduce products and get the Penney’s team to think differently. Even more so, Johnson was lured by the prospect of reinventing another slice of retail, just as he did with the technology sector.

“This is a massive undertaking for Ron,” said someone close to him. “It’s one hell of a difficult job. It’s a hugely competitive market and there are very few brands out there that aren’t being discounted left and right. This job requires supercreativity, brilliant merchandising and a lot of blocking and tackling.”

Two major investors, William Ackman of Pershing Square Capital Management and Steven Roth of Vornado Realty Trust, have been pushing changes at the retailer and for Johnson to sign on, but Ullman said Tuesday in an interview that three or four years ago, around the time that his chief of merchandising and second-in-command Ken Hicks left the business to run Foot Locker Inc., he tried to recruit Johnson and has had his eye on him since.

“I knew of Ron’s success, his focus on innovation, creativity and reinvention,” Ullman told WWD. “But it wasn’t the right time for him. He was very passionate about Apple, which is probably the number-one retailer at this point.”

Ullman also noted that he joined Penney’s in December 2004 when he was 58, and implied that succession was something to be dealt with in the not-too-distant future. Ullman has been managing with a disability that has him often using a Segway scooter to get around.

He did take credit for building “a new foundation” at Penney’s, and cited what’s been an aggressive rollout of merchandise initiatives, among them the addition of Sephora; Call It Spring shoes, which are made by Aldo; MNG by Mango; Nicole by Nicole Miller; American Living, which is designed by Polo Ralph Lauren Corp.; Olsenboye by the Olsen twins, and Modern Bride jewelry. There’s also been a buildup of private labels, including a.n.a., to add a contemporary flavor to the assortment.

“These are things that have attracted middle-income consumers even during the recession,” Ullman said. Going forward, “the biggest opportunity is to have more visits from existing customers and visits from those that wouldn’t have considered us before. There’s lots of white space to win.”

Johnson’s arrival, considering his track record at Apple and, prior to that, at Target Corp., where he held senior merchandising roles, signals major changes ahead for Penney’s. Asked if Penney’s, which deals in selling soft goods, could start carrying Apple products, Johnson replied: “I don’t want to comment on any future plans for Penney’s or Apple.”

He underscored that though his last decade was with Apple, most of his career was spent serving the middle market in home and apparel, including at the now-defunct Mervyn’s, which he joined in 1984, then Target, where he spent 15 years in a variety of merchandising positions in men’s wear, women’s apparel and accessories, children’s and home. He is credited with launching the chain’s “Design Initiative,” which began with the Michael Graves collection for home and included other key brands such as Calphalon, Carr and Bodum. He has an M.B.A. from Harvard Business School.

Johnson sees department stores, which just a few years ago were widely regarded as retailing dinosaurs, as having the right ingredients to thrive in the future. “Department stores have great real estate in the mall, large marketing budgets, design teams and access to a lot of great merchandise,” Johnson said. “The key in a large space is how do you get a compelling point of view. Sometimes department stores can get overwhelming.”

Though Penney’s performance has recently lagged that of competitors like Macy’s Inc., Target and Kohl’s Corp., Johnson said: “I have no doubt J.C. Penney can emerge as a vibrant retailer. Such good progress is being made, I can help the company run faster. I think Penney’s is only limited by its imagination. It can become whatever we choose it to be.”

Known more for his retail and merchandising skills and as a marketer who understands technology and can push retail to new horizons, Johnson was not considered a lead candidate to one day run Apple, which has Steve Jobs, a technology wizard, at its helm and Tim Cook, the chief operating officer, running the operations while Jobs is on leave of absence due to illness.

Apple stores are known for generating extremely high sales per square foot with few stockkeeping units — the Manhattan store at Fifth Avenue and 59th Street, which operates 24-7, is said to generate more than $400 million in annual sales.

They’re also known for strong service, being manned by roving associates with mobile checkout devices so customers can purchase and exit stores quickly, and their Genius Bars, where consumers get free answers to technical questions or get their products repaired. Recently, IPad 2s embedded in Lucite replaced traditional signs and act as mini-kiosks to allow customers to learn about products and call for help.

“As Ullman transitions out, he leaves a legacy of one of the best, most talent-right hires he ever made. Ron Johnson combines a knowledge of technology and retail that few business leaders have,” observed Les Berglass, chairman of Berglass + Associates, an executive search firm. “He has the Target training and the training at Apple where the belief is that anything is possible. When he built Apple’s retail, they threw out every model. When you dedicate more than half your space to educating the consumer rather than selling the consumer, your consumer becomes addicted to the business. That’s really what’s behind so much of their success.”

Johnson’s appointment at Penney’s, Ullman said, portends “an acceleration of innovation and attractions. That’s what we are adding on now.…Initially, he will throw himself into the merchandising side of the business — all of it — the product development, sourcing, marketing and merchandising of all categories. There is plenty to do.” Ullman will be more involved in other functions, but he said the two will work as a team.

Still, Johnson is leaving a company that has reinvented technology and retailing over the last decade. “Penney’s had to offer him a pot of gold to go there,” said a retail industry source. “Ron probably made $100 million [during his time at Apple] and had to leave to $25 million to $50 million in unrealized options.”

Johnson’s base salary at Penney’s was set at $1.5 million and he is eligible to receive an incentive bonus of up to 125 percent of that salary depending on the company’s performance. He will also get 1.7 million restricted stock units vesting in January 2012, which is designed to replace compensation he would have received had he stayed with Apple.

In a show of commitment that carries much risk, Johnson agreed to make a personal investment of $50 million in warrants that would allow him to buy 7.3 million shares of Penney’s stock for $29.92 a piece — the closing price just before he signed the deal. Johnson has to wait six years to exercise or hedge against the warrants, which have a full term of seven-and-a-half years.

The deal, which has provisions for a change of control at the company and the ceo’s termination, is a bet on Johnson’s part that his stewardship will boost the company’s stock price.

Meanwhile, Johnson’s appointment raises speculation over how long Ullman, considered one of the industry’s smartest and most accomplished executives, will remain at the Plano, Tex.-based company. He has an employment agreement enabling him to extend his stewardship on an annual basis.

According to Dana Telsey, ceo of Telsey Advisory Group, “Succession planning has been in the works for a while at Penney’s. Given that Ron Johnson doesn’t have department store background, it was a bit of a surprise, but he brings a forward-thinking element to Penney’s business,” which she said last quarter was in line with estimates, but still needs consistency in same-store sales performance.

When Ullman joined Penney’s as chairman and ceo in December 2004, succeeding Allen Questrom, the company was already deep into a multiyear turnaround and showing strong results. His challenge was to sustain the momentum and create more of a buzz around the brand so it resonated louder with a younger crowd and its middle-income audience. With mall development drying up, he executed an off-mall strategy for store growth.

Before Penney’s, Ullman served as group managing director of LVMH Moët Hennessy Louis Vuitton; chairman and ceo of DFS Group Ltd., the travel retailer; chairman and ceo of R.H. Macy & Co., and group managing director of Wharf Holdings in Hong Kong. He was also once a White House Fellow in President Reagan’s administration. Ullman currently serves as deputy chairman of the Federal Reserve Bank of Dallas, and is on the board of Starbucks Corp. and the Retail Industry Leaders Association, and is chairman of the board of Mercy Ships International.

Asked how long he will remain at Penney’s, Ullman didn’t specify, but said he has “a long-term commitment to the board.”