One of the last of the true outsized characters of Seventh Avenue, he was at his height the charming king of the copyists on Seventh Avenue. 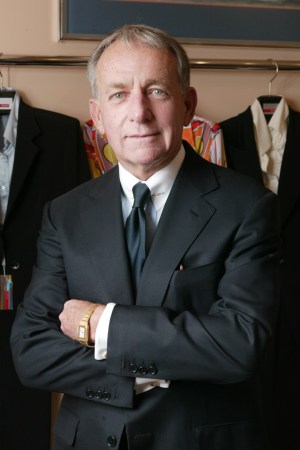 NEW YORK — Jack Mulqueen, one of the last of the true outsized characters of Seventh Avenue, died peacefully at his home on Wednesday at age 69.

The cause of death was liver cancer, which had been diagnosed earlier in the year.

Mulqueen, a fast-thinking, mischievous visionary, was at his height the charming king of the copyists on Seventh Avenue. While other manufacturers preferred to be discreet about their knockoffs, he swaggered about his, boasting in 1981 that he had bought a $610 Chloé blouse at Saks Fifth Avenue and copied it for his Silk Fashion Group to wholesale for $48.

His unabashed approach won him a splashy lifestyle that included such assets as a silver Maserati, a white Ferrari, a silver Rolls Royce, a 38-foot Rybovich Sport Fisherman boat docked in Palm Beach and an apartment on Sutton Place in Manhattan. He “gambled in Monte Carlo, shopped on Savile Row and dined at Maxim’s,” he said. A regular among New York’s nightlife, he was known as Fast Jack, profiled in French Vogue as “un roi de la soie,” and said in 1981, “I don’t cut in dozens or grosses. I cut tonnage.”

A big dreamer with a sharp, analytical mind and a highly accomplished sailor, John Anthony Patrick Mulqueen was a native New Yorker. His father owned a trucking company and he went to Fordham, which he left to sell BVD hosiery. He was married to his wife Patricia for 15 years; they had a daughter, Whitney, who was an equestrian. He and Patricia later divorced, something he attributed to his workaholic ways. His second wife was Diana Villanueva. Mulqueen spent his early working years at Jones New York as one of the company’s founding principals, and running Jaeger USA as managing director, growing the luxury British label’s retail network to more than $100 million in more than 90 in-store shops and freestanding stores. He then founded The French Connection and the St. Tropez Pants Works, both of which were financed by Maurice Bidermann. He ran these businesses while being U.S. president for Dana Cote d’Azur, a clothing firm based in Nice, France.

In 1976, with the Korean manufacturer Kosilk, he launched his own firm, Jack Mulqueen Ltd., which went on to feature licensed collections for Pat Tennant, Stephen Burrows, Valentino, Zandra Rhodes and Mary McFadden, along with his signature line. His strategy: to tell top designers he was going to copy them, and ask if they wanted to do a licensed collection with him instead. Then, if they said no, he’d knock them off anyway. “I copy only shining stars like Kenzo, Ungaro, Yves Saint Laurent and Giorgio Armani,” he said in 1981.

Ellin Saltzman, then senior vice president and fashion director of Saks Fifth Avenue, said, “He seems to copy collections before they are created.”

“His dresses would be a lot less interesting,” said Bloomingdale’s president Marvin Traub at the time, “if we didn’t also carry the designer originals.”

Mulqueen made his reputation in better-priced silk dresses, cotton dresses and knitwear and was a pioneer in using nonwhite models, helping to launch Iman’s career. By 1981, Jack Mulqueen was a $150 million business, with freestanding shops in New York, Palm Beach, Chicago and Bal Harbour. Meryl Streep, Faye Dunaway, Barbara Sinatra and Olivia Newton-John were among his fans in the early Eighties. But his real customer was a young working woman who would have been unable to afford the original Chloé blouse.

The silk manufacturing market was oversaturated, however, and Mulqueen was forced to shutter the business in 1986. Subsequently, Mulqueen had more comebacks than Dorothy Parker, but never quite recouped the scale he had enjoyed in the Seventies and early Eighties. In 1989, he signed a pact to create dresses for Cherokee. In 1990, he became involved with the Non-No Fashion Group of Korea. In the ensuing years, he contracted for other Seventh Avenue houses, working with Jaclyn Smith for Kmart, and the Kathie Lee Collection, did private label and created mass-market apparel through a license with Revlon.

In 1995, he returned to the bridge market with an eveningwear collection and, in 1996, created a moderate line, Jack Mulqueen Studio. In 1998, he took part in what turned out to be a failed business deal between Sears, Roebuck and Benetton. In 2000, he launched a signature sportswear line to be sold in Bergdorf Goodman and Neiman Marcus — what he called an “international Riviera” look — that featured feminine silk blouses inspired by men’s tuxedos and dress skirts and narrow pants. He said he was influenced by the return of Gucci and by Tom Ford’s new role at Yves Saint Laurent. “We’re not going techno, we’re going superluxury,” he told WWD. “The customer hanging out at the Hotel Monte Carlo during race week is the customer we want.”

“I’m more extreme than most,” he once said, “but like I tell Whitney about her horses: If you come in second, you might as well come in last.”

In addition to his daughter, he is survived by his wife Diana, son Jack and a grandson, Cole. Private services were held Thursday. In lieu of flowers, the family asks that donations be made to New York’s Rogosin Institute for diabetes and kidney research.