The impending management change comes less than a month after the company filed for its IPO, following a failed attempt to acquire Avon Products Inc.

By Molly Prior and Evan Clark on July 25, 2012
View Slideshow 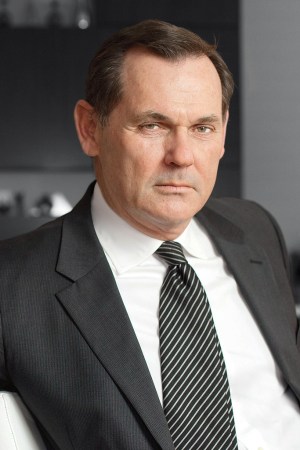 NEW YORK — Bernd Beetz, one of the beauty industry’s most competitive and hard-charging chief executives, will soon be on the sidelines.

This story first appeared in the July 26, 2012 issue of WWD. Subscribe Today.

Coty Inc. on Wednesday said Beetz is stepping down as the company’s ceo, and that its board has named president of Coty Prestige Michele Scannavini as his successor, effective Aug. 1. The impending management change comes less than a month after Coty filed for its initial public offering, following a failed attempt to acquire Avon Products Inc.

Beetz, 61, said he was not ready to talk about his future plans, but he will stay on the Coty board as non-executive director. He also will continue to own 6.2 million shares of Coty, or 1.6 percent of the company.

“I’m breaking free,” Beetz joked in an interview with WWD. “I’m going to broaden my interest.”

Beetz said it was “a good time to pass the torch” and described Scannavini, 53, as his “right arm” over the past decade. The two executives have known each other for more than 20 years, since Scannavini reported to Beetz when they both worked at Procter & Gamble Co.

Coty’s management move struck several financial observers as abrupt, particularly as it comes after the company filed its S-1 registration form with the U.S. Securities and Exchange Commission on June 29. They speculated that the leadership shuffle ahead of the planned IPO signals that there’s likely friction between Beetz and company chairman Bart Becht, who stepped forward as the very visible front man during Coty’s attempt to acquire Avon last spring. Beetz, on the other hand, remained silent during the company’s very public battle for the beleaguered direct seller.

Beetz — who grew the company’s sales nearly threefold to $4.1 billion since his arrival in 2001 — is widely credited as the architect of the post-Elizabeth Taylor celebrity fragrance revival and the mastermind behind Coty’s aim to move deeper into skin care and cosmetics. During his tenure, he oversaw a string of acquisitions — most notably Philosophy and OPI — to deliberately nudge the business away from fragrance. The portfolio shift was seen as necessary to ready Coty for an IPO. His efforts proved successful: In fiscal 2011, fragrances accounted for 57 percent of Coty’s net revenues, down from 60 percent in 2009. During the first nine months of fiscal 2012, fragrances accounted for 55 percent of revenues.

Last year, Beetz — an avid sportsman who uses the phrase “faster, further, freer” to describe Coty’s strategy — told WWD, “In 2001, when I joined Coty, the company was barely on the map, and now we are one of the world’s largest fragrance companies and a leader in global beauty….When you see opportunity, you move. We have the same strategy that we’ve had for 10 years. We are boringly consistent: We wanted to be the leading player in fragrance and that’s what we’ve accomplished. We want to become a strong number-two player in color cosmetics worldwide…and we want to be a stronger player in skin care.”

Beetz’s résumé includes stints as president and ceo of Parfums Christian Dior, a division of LVMH Moët Hennessy Louis Vuitton, and several senior positions at P&G. Past and present colleagues have credited Beetz with Coty’s successful transformation from a niche fragrance player into a global beauty firm, where executives are encouraged to take calculated risks.

“He’s the guy who got Coty from A to S, and there’s still a little left to go,” said one financial source, who has worked with Beetz. “The question is, will Michele change the plan or continue it from S to Z?”

“This is unusual. You don’t want to file an amendment to your S-1 due to a ceo change,” said another source, who added that Beetz’s position on the board should help assuage investors’ concerns over his giving up the management reins.

Coty accountants are expected to complete their audits of the firm by late August, at which point the management will begin the road show to sell shares. Scannavini presumably will have the starring role during the process. The incoming ceo did not get into specifics about his plans on Wednesday because he hasn’t started yet and because the company is restricted in what it can say prior to the IPO. But Scannavini did suggest that acquisitions would continue to be part of the mix. “The company has been very active in the past and I think this is in the DNA of the company,” he said.

Much of Coty’s recent growth has come from its deal making. The firm spent $2.14 billion over the last two years to buy TJoy, Dr. Scheller, OPI and Philosophy. The fish that got away is Avon, which this year rebuffed Coty’s repeated efforts to engage in takeover talks.

The Italian-born Scannavini began his career at P&G, and then moved onto the automobile and fashion industries, heading up sales and marketing for Ferrari and Maserati, and later serving as ceo of the Italian sport apparel and footwear firm Fila Holding SpA.

Scannavini told WWD, “We have a lot of opportunity in front of us,” noting the company has been quick to jump on new trends.