Sports Shakeup: CEOs of Nike, Under Armour to Step Aside in January

To use sports analogies, two of the giants of activewear underwent front office shakeups on Tuesday — and called on their benches for their new chief executive officers.

Nike and Under Armour both tapped new ceo’s who will take up their new roles in January. The switches came as the two companies have been buffeted by scandals over the last few years ranging from sexual harassment allegations to a “bro” culture to, in Nike’s case, allegations of funding a runners’ program that used illegal doping methods to boost performance.

Under Armour tossed the first lob when it made the surprise announcement before the market opened on Tuesday that its highly visible founder, Kevin Plank, will cede the ceo position to president and chief operating officer Patrik Frisk in January. Plank was named executive chairman and brand chief and Frisk will report to him. 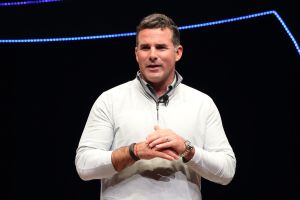 Nike returned the volley after the market closed by making an equally surprising announcement that its ceo, Mark Parker, will step aside on Jan. 13 and be succeeded by John Donahoe II, a Nike board member. Parker will then become executive chairman.

Although its ceo Kasper Rorsted remains in place, Adidas too had a major resignation this week — Eric Liedtke, executive board member of Adidas AG, and the mastermind behind the company’s wildly successful collaborations with Kanye West, Pharrell Williams and Beyoncé, said he will be leaving the brand at the end of the year “to pursue new projects and ventures.” Liedtke was considered by many to be the heir apparent to Rorsted.

The Under Armour news didn’t move the stock too much; it closed up 6.88 percent at $19.42 a share. Nike’s stock, which closed 0.64 percent in the red to $95.60 a share, turned positive in after-hours trading following the release of the news of the change in top management.

Just why either company decided on a changing of the guard is unclear. In the case of Nike, the company has continued to outperform on all cylinders, tipping past the $1 billion mark in profits at the beginning of 2019.

But even as Nike has remained unchallenged as the global market leader in activewear, it has been rocked by scandal after scandal under Parker’s watch. These allegations of a toxic workplace; female athletes getting paid less than their male counterparts; the departure of Trevor Edwards, president of Nike’s flagship brand, and criticisms for choosing professional football star Colin Kaepernick to lead one of the company’s marketing campaigns.

Most recently have been the allegations surrounding former champion runner Alberto Salazar and his Oregon Project at Nike. The U.S. Anti-Doping Agency banned Salazar for “multiple anti-doping rule violations” and the project subsequently was shuttered. Salazar has denied the allegations, but reports indicated that Parker was aware of the work he was doing at the project.

Then there has been the controversy surrounding Nike star LeBron James of the Los Angeles Lakers, who ignited a furor by seeming to choose business over backing free speech when he said on social media that Houston Rockets general manager Daryl Morey was “misinformed” in his comments about supporting the protesters in Hong Kong. Nike has a lifelong deal with James that will pay him an estimated $1 billion — and has yet to comment on James’ comments.

But while Nike has continued to grow profits and sales, the turnaround at Under Armour has been slower in coming.

The company’s stock fell sharply last winter after news broke that the company had stopped expensing executives’ trips to strip clubs amid the #MeToo Movement. This left a bad taste in the mouths of investors and consumers, many of whom felt it was a bit late. It was also hurt by by “getting too big too fast,” Plank has said, which included expanding product categories, selling to the highly promotional Kohl’s as a quick fix to boost sales, and moving swiftly into markets outside of the U.S.

Still, the company has made some strides.

Thanks in large part to Frisk’s operational skills, the brand has made progress on a five-year strategic growth plan designed to help it navigate through some rough waters while transitioning from a precocious upstart — albeit an almost $5 billion one — to a global sports powerhouse.

On Tuesday, Plank and Frisk appeared together on CNBC and fielded questions on whether the board of directors — or any other internal issues — forced the change.

Plank insisted, “This is my decision,” adding that he and Frisk “complement each other so well.”

Using one of the sports metaphors that have been the rallying cry of the company since Plank created his first non-cotton compression shirt in 1996, he said: “The company is now moving from defense to offense.” He stressed that “there couldn’t be a better time for us to do this. You’re going to see this brand unleash. It will empower us. It’s going to allow Patrik to make decisions to run the day-to-day. And allow me to continue to have the vision and think about what’s next for this brand and where we can go. It’s a great partnership.”

He said he did not get pressure from the company’s “great” board of directors and said that “nothing is changing. Patrik will continue to report into me. And we’ll have the ability to divide and conquer.”

Frisk echoed Plank and said the “transition was planned and we’ll continue to run the same plan that was put in place. This is about continuity, running the play and turning from defense to offense.”

Cristina Fernández, director and senior research analyst for Telsey Advisory Group, was upbeat about the news, writing in a note: “We view the ceo transition as positive and believe Mr. Frisk is the right person to lead the company forward as its second ceo.” She said that while it was not clear when the move would be made, “we believe the leadership transition was anticipated.”

She pointed to Frisk’s role in the company’s transformation plan that has been in the works for the past 2 1/2 years where he oversaw revenue, product, marketing, strategy, and supply chain. He will now broaden his leadership, she said, while Plank will focus on “elevating the product, amplifying the brand, and maintaining the company’s culture. The two leaders seem to have a good working relationship and appear aligned in their goals for the company, which should help ensure a smooth transition.”

Even so, she said that the company’s North American sales continue to disappoint and it needs “stronger product innovation, a constant flow of newness, and more advertising to drive sales growth at full-price amid strong competition from bigger players Adidas and Nike and growing brands like Puma.” As a result, she said she is maintaining the company’s market perform rating and a 12-month price target of $23.

Edward Yruma, managing director of KeyBanc Capital Markets, also pointed to Frisk’s “initial success” spearheading Under Armour’s turnaround due in large part to “a renewed focus on operational discipline.” He called the elevation of Frisk “a logical progression” that allows Plank to continue as chairman while being freed up to “focus on longer term strategic plans, product, and most importantly, culture.”

Matthew Boss, managing director of equity research for J.P. Morgan, said the company’s 50 percent “rationalization” of stock-keeping units, 20 percent inventory reduction, 30 percent vendor base consolidation and “expense base right-sizing over the past three years” under Frisk’s leadership led to this “next natural step in the Plank/Frisk partnership.” He said Frisk is “well respected both internally and across the investor community” and is now viewed as “a tenured multiyear future leader” rather than a “hired outside gun.”

Also leading to the optimism was the appointment over the past 15 months of four other key hires: Stephanie Pugliese as North America brand president; Kasey Jarvis as chief design officer; Tchernavia Rocker as chief people and culture officer, and Alessandro de Pestel as chief marketing officer, Boss pointed out. These hires mean that the company’s organizational structure is now fully set for the next phase of its five-year plan.

The equity research team at Jefferies was perhaps the most positive, writing in a note: “This move supports our thesis that the Under Armour brand is strong, and with outsized growth ahead, high operational discipline is needed. We believe Mr. Frisk’s extensive background, with 30-plus years of experience in the apparel, footwear, and retail industry, will help to further instill such discipline and usher in a new era of success at Under Armour.”

They said that his success so far proves he is “an ideal candidate” and that “there is more growth ahead to be unlocked.” They also said they were glad that Plank will continue to be involved and the company can draw on his “deep industry knowledge and lengthy experience building the brand.”

Craig Johnson, president of Customer Growth Partners, was a bit more reticent. He said that history has shown that when a founder hands off the ceo role but remains with the company, it often leads to trouble. He pointed to Stefan Larsson at Ralph Lauren, Eddie Lambert at Sears and Martha Stewart at her namesake company as examples. “The best corporate transitions are when the founder makes a clean break,” he said.

But while Plank was “an exceptional entrepreneur and visionary ceo,” now that Under Armour is “a mature company with rising competition,” it requires someone with a different skill-set to be at the helm. He said Plank has “made some real strategic blunders,” including the decision in 2016 to sell its product in Kohl’s, which is a highly promotional retailer, at the expense of its largest wholesale customer Dick’s Sporting Goods, which sells Under Armour at full price. “Rule number one: don’t screw up your primary relationship,” Johnson said.

While he was generally positive about the ceo shift, he hopes that further clarification about their distinct duties will be forthcoming in the near future.