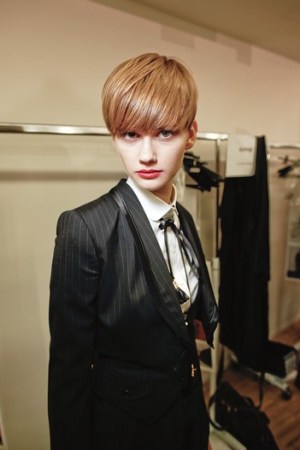 Girls are borrowing more than just their boyfriends’ jeans. A decidedly masculine sensibility pervaded runways this spring. Some of the season’s most in-demand models were Iris Strubegger, Tao Okamoto and Ranya Mordanova, all of whom sported chic cropped cuts and looked sexy and uncomplicated without mounds of hair and makeup. Fashionwise, the looks ranged from bespoke-inspired three-piece suits, as at Ralph Lauren, Junya Watanabe and Dolce & Gabbana, to dinner jackets at Givenchy to his-and-hers at Chanel. The gender bending seems only fair. After all, a new crop of Hollywood leading men, such as Ed Westwick from Gossip Girl and Robert Pattinson from Twilight, aren’t above a bit of blush or sheen of gloss if it means portraying their characters more convincingly—and they’re winning legions of fans along the way.