Stefan Larsson’s Journey: From Out in the Wild to Next in Line at PVH

The former Ralph Lauren chief executive officer is now heir-apparent at PVH and is coming in with a fresh outlook.

Stefan Larsson is coming in from the fashion wilderness.

And he’s back on his way to the corner office — at PVH Corp., where he was named president and heir-apparent to longtime chief executive officer Emanuel Chirico, who is also chairman.

The move marks the beginning of a deliberate changing of the guard at PVH, the $9.7 billion fashion player that’s home to Tommy Hilfiger, which is going from strength to strength and drove revenues up 11.6 percent to $4.3 billion last year, and Calvin Klein, which is pivoting away from the more fashion-forward direction of Raf Simons, but still drove revenues up 7.8 percent last year to $3.7 billion.

Chirico, at 61, isn’t sprinting for the exit, but is more aware that it’s there. And although he just re-upped for five years, the general plan is for Chirico to give Larsson a chance to learn the business and then he’ll transition to executive chairman over the next three to four years, handing over the job of ceo.

Larsson, 44, comes from a different generation, but in an exclusive interview with WWD on Tuesday, the two executives seemed to have chemistry and certainly shared a business philosophy, one that revolves around building consensus, taking care of their workers, building brands and leveraging global scale. His first day is June 3.

But Larsson is also coming in with a new attitude, having had something of a ceo gap year contractually imposed on him after leaving Ralph Lauren Corp. in 2017 amid clashes with founder Ralph Lauren.

And at PVH, Larsson will have time to acclimate, whereas at his two former posts, at Gap Inc.’s Old Navy and Ralph Lauren, he had to quickly access the business and set a new strategic vision.

“We wanted to bring Stefan in, give him a chance to learn the company,” Chirico said. “He obviously already knows the industry cold, but [give him] a chance to learn the company, the people, not walk into — like he has had to in the last few situations, what I would describe as turnaround situations. PVH is not that. So having the ability to walk in and really take the business in, understand it and then the two of us work together on the strategy.

“Our corporate culture and how we operate is critical to us,” Chirico said. “As I was meeting with candidates for the last 12 months, I was really looking for someone who would fit into our culture. He’s very much a consensus builder. I think, like me, he doesn’t mandate things from the top and then drive them down, [he] more or less gets the input, makes a decision and then moves on, so stylistically we’re very similar.

“He likes to say, ‘I recognize what I don’t know,’ and I think that’s important,” Chirico said. “Sometimes, when you sit in this position, you can think you know everything. What you realize is the people who are closest to the business, who are dealing with the day-to-day operations, really understand it better. [He has] a high level of curiosity about how things operate and what we can do to make them better.”

Larsson’s impending arrival at PVH also received a warm welcome from Wall Street. Shares of PVH rose 3.2 percent to $112 in after-hours trading on news of his appointment.

“While his time at Ralph Lauren was short-lived, he’s among the most proven operators in the sector as the architect of much of the success at H&M and through the Old Navy turn,” Binetti said. “This is a very strong hire for PVH.”

Larsson is in the unusual role of having been the ceo of a major fashion company and is now —  after a long break when he’s had a chance to take the measure of the market and his own future — is on his way to lead again, this time with an extended opportunity to settle in.

“When I left Ralph it was the first time I wasn’t able to work,” Larsson said. “I was under a non-compete for almost a year.”

During that time, Larsson set out on what he described as a “global learning journey,” meeting with more than 150 people who he believes are shaping the future of fashion, from creative types to entrepreneurs to tech experts.

Larsson was also able to gain perspective on his time at Ralph Lauren, where he came in as the wunderkind taking the reins from a fashion titan, but was ultimately unable to make it work, even though the company kept much of his strategy after he left.

“I worked well with Ralph,” Larsson said. “We worked well together. I’m grateful for the opportunity I had to come in and help him turn the business and the brand around and unlock the iconic strength, set the business in the right direction.

“Maybe it didn’t end the way we hoped it would end,” he said. “You know, sometimes those learnings, the toughest learnings are the best learnings that make you learn the most, develop the most. And it’s hard to appreciate that in the moment, but looking back.…I’m very appreciative and I think it will make me a better leader coming in.”

At PVH, Larsson will have the benefits of well-known names like Tommy Hilfiger and Calvin Klein — and potentially more as the company looks for another major brand to balance out the portfolio — as well as existing platforms to build businesses in the U.S., Europe and Asia, and a growing platform in South America. 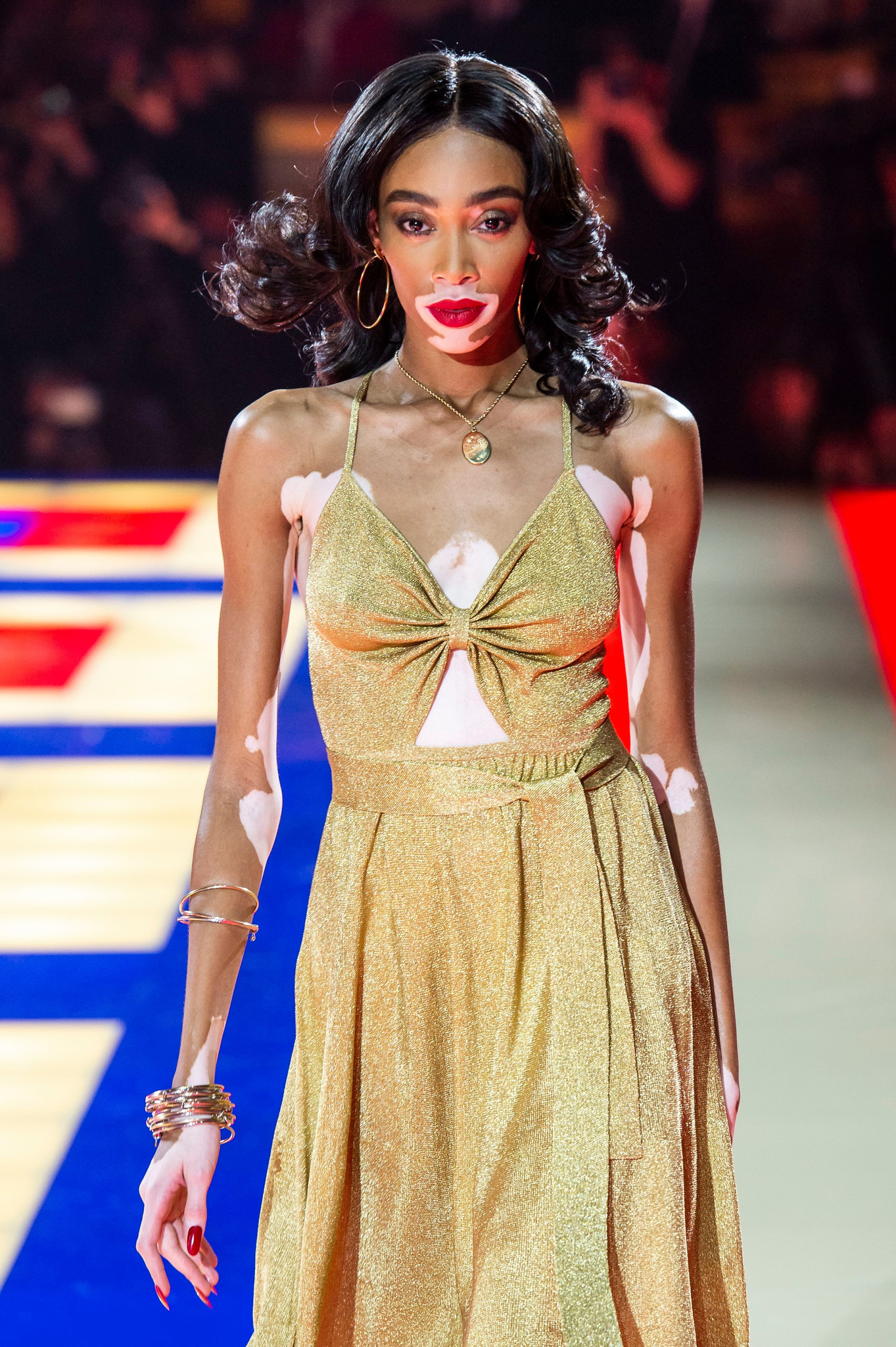 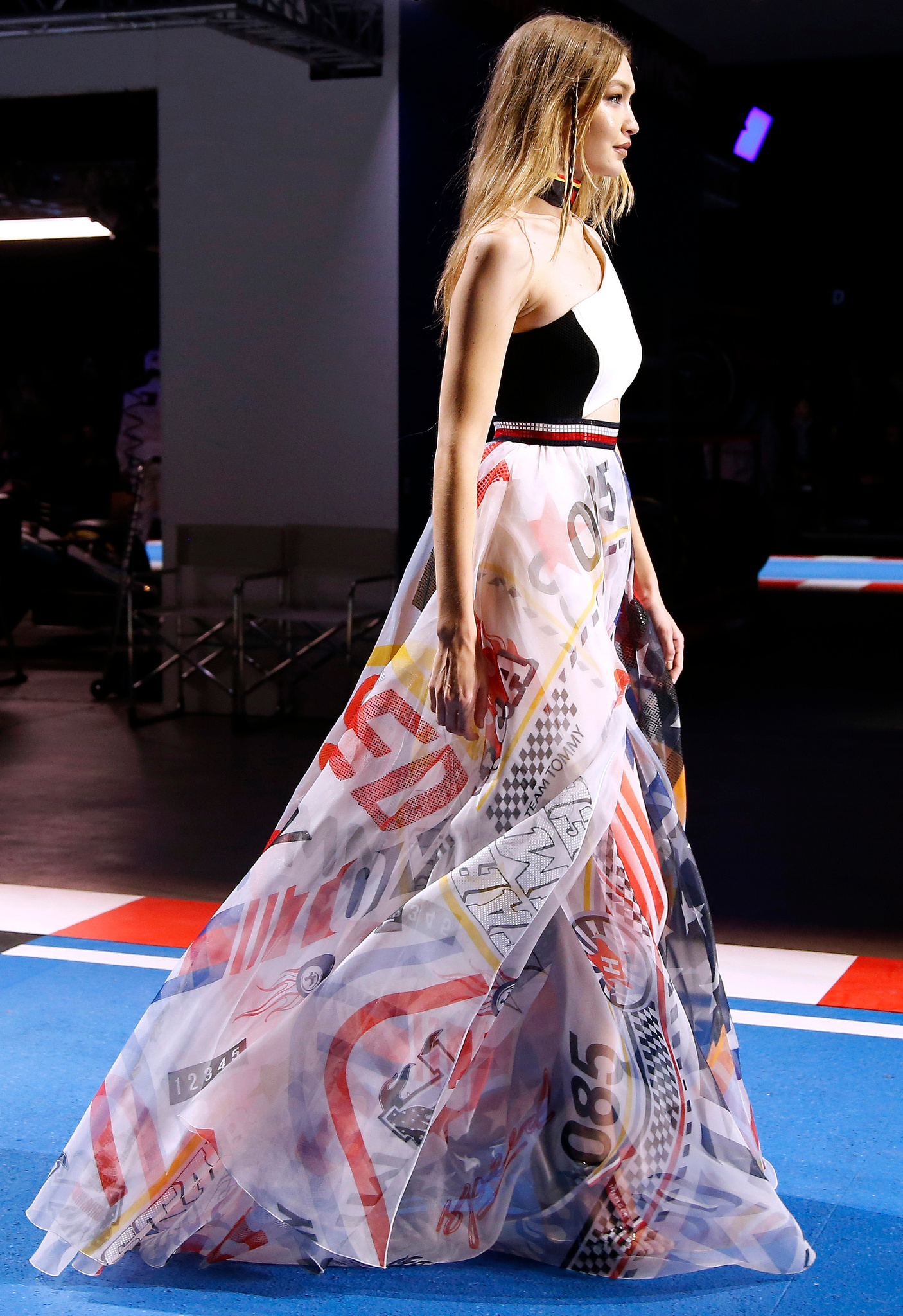 Gigi Hadid on the catwalk for Tommy Hilfiger in 2018.  WWD/REX/Shutterstock

All that branding might and strategic muscle fit in with Larsson’s — and Chirico’s — world view.

“Being a big iconic brand, having a big pool of loyal customers who love your brand is a huge advantage,” Larsson said. “When you have that, when you have the customer trust and loyalty and you have the economy of scale, you can use that to do what Manny and his team have done with Tommy and partly with Calvin: You connect your brand to culture and you create desire and you use technology to connect with the consumer the way they want to connect and then you improve your operating model.”

Chirico added: “In our industry, the big are only going to get bigger. I don’t know how you run a mono brand in this environment because of all the pressure that’s put on you from a cost point of view…if you have a single brand, I think the challenge is you’ll make wrong decisions for the brand to stretch for growth.”

And brands of all sizes are having to make lots of decisions and quickly.

“In the retail apparel space, the world is shifting under our feet,” Chirico said. “The distribution model has completely changed over the past five years and is going to continue to change. Five years ago, I would not have anticipated in apparel that e-comm, in all its forms, would be as big as it is.”

But while PVH’s digital business is growing at 20 percent, the ceo said “we’re making today just about all of our money in the brick-and-mortar space.”

Many of the new brands jumping in to grab online share also find it hard to turn a profit in the digital space — although they are often good at making noise.

“Some of these competitors, all the digital natives that are coming on, we call them ‘ankle bitters,’” Chirico said. “Each one individually is really small, but if you add them up, they’re probably representing 3, 4, 5 percent of different product categories. And to be honest, almost none of them are making any money.”

And this is just one moving part of a complex picture — which includes the trade war with China, declining traffic at retail and the continued rise of off-price — that Larsson will ultimately have to manage.

For now, Larsson will oversee all the company’s brands and regions, although early on he will be paying particular attention to Calvin Klein, which is still finding its way after Simons’ rocky tenure.

The designer, who left Calvin Klein in December, moved the brand in a more fashion-forward direction that was hailed by critics, but didn’t resonate with shoppers. PVH has since eliminated the Calvin Klein collection business, after an investment of $60 million to $70 million, and said it would cost more than $170 million to restructure the business.

Chirico said: “We have a turnaround going on at…Calvin Klein and I think you’ll find Stefan is going to be spending more of his time there at the beginning, working with that senior leadership team on the continued turnaround.”

Calvin Klein, while still a powerhouse in terms of brand recognition, is feeling its way forward, having ceded the collection business, which was traditionally seen as a high-fashion “halo” that shined a light down on the rest of the brand.

“We’re approaching the halo differently,” Chirico said. “We think the world has modernized. We think the days of 10-page spreads in Vogue and connecting with the customer — I think it’s much more complicated today. I think the consumer wants an emotional connection with the brand and we’re trying to build that  up while keeping the halo around the brand going forward.”

Chirico said: “We all recognize that we’re in the middle of a turnaround in a brand that doesn’t need to be turned around with the consumer. We really have operational issues that we’re dealing with and we’re focused on those. And I think we’re comfortable with the management team that’s in place right now.” 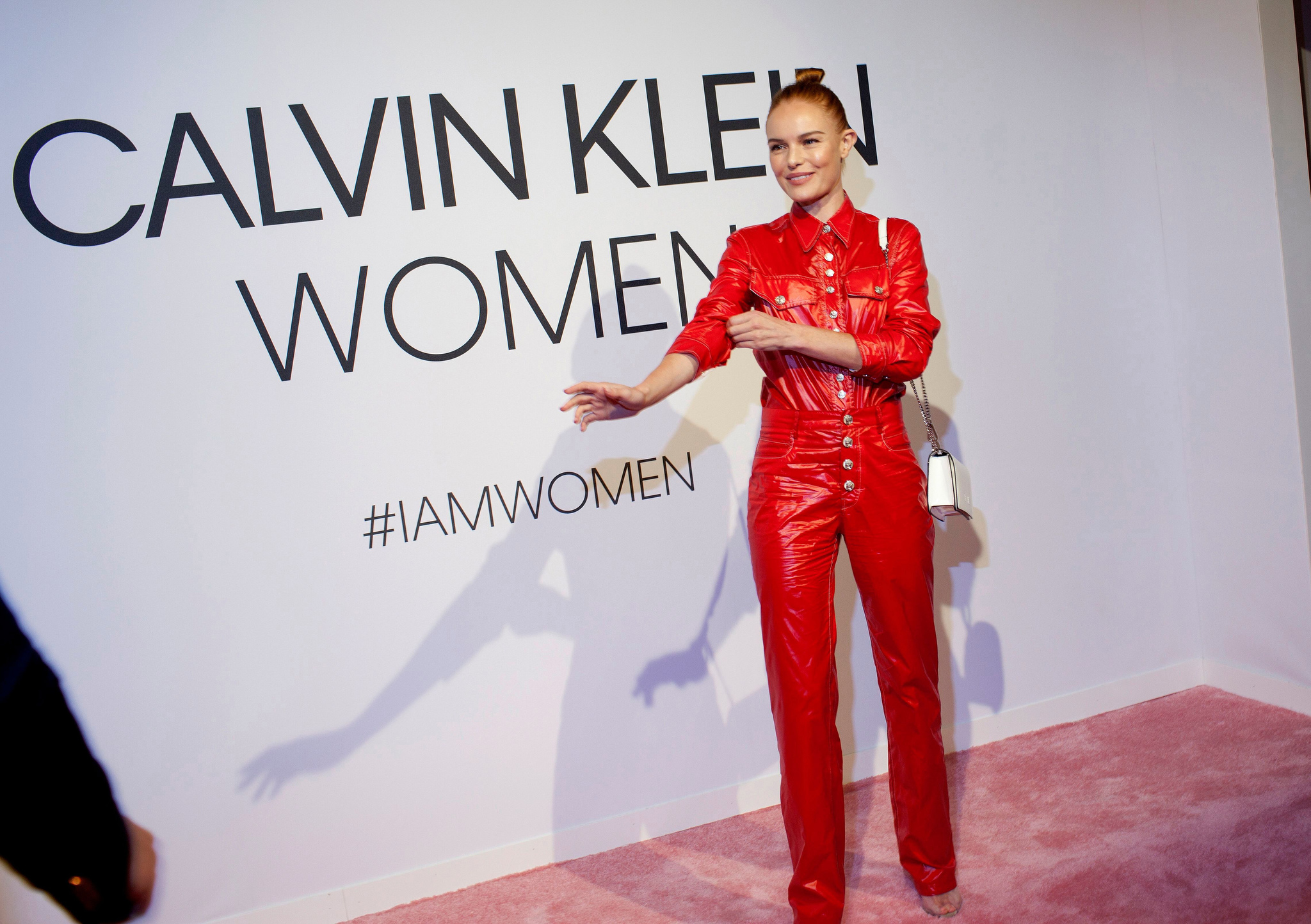 Kate Bosworth at the launch for the Calvin Klein Women fragrance.  Lexie Moreland/WWD/REX/Shutterstock

As Larsson digs in to help Calvin Klein turnaround, he has an example of success very close by.

“The Tommy management team, under Daniel Grieder [ceo, Tommy Hilfiger global and PVH Europe] and Tommy [Hilfiger]’s leadership as our creative visionary has been stellar,” Chirico said. “Marketing has been so on point. The product execution has been excellent. There’s a lot of learnings from Tommy that I think we can apply also to Calvin.”

Prior to the arrival of Larsson, Grieder was seen as a possible successor to Chirico. Now that change has come, PVH clearly is looking to keep him.

“We’re doing everything we can to keep Daniel happy in his role, he’s been a fantastic ceo at Tommy,” Chirico said. “He’s the king of Europe for PVH and that’s going to continue.”

Chirico added: “If you look at Daniel’s and my age, when you think about succession planning and the fact that I’m looking to stay for another five years overall, Daniel and I are a couple of years apart in age. So I think from a succession plan, we both recognize that we’re on top of each other. He’s a true brand marketing executive and I’m a corporate executive. We really work well together. We balance each other out.”

Now, Larsson is being groomed to lead PVH into the future — and he has a little bit of time to prepare for it.