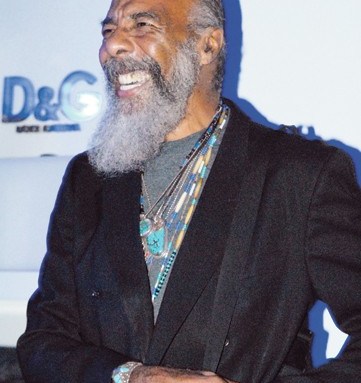 Actor and singer Terrence Howard got the Bloomingdale’s crowd in the groove Wednesday night, when he performed on the new Metro level to help launch his debut CD “Shine Through It” and kick off the store’s fall campaign, “The Beat of Chic.”

Howard’s star charisma — he shared “his philosophies on life” through his music and a lot of eye contact with women in the audience — had its effect. “Sexy and young and cool — that’s how I feel when I listen to his music,” said Stephanie Solomon, Bloomingdale’s fashion director and vice president.

“I think he’s looking at me,” said Brazilian Cláudia Bicalho, a former model who towered among those near the front of the stage.

“He gets offers all the time to perform, but he held out for this,” said Lisa Ellis, executive vice president of Sony Music Label Group. “He felt this was the right collaborative imagery,”

Sony is partners with Bloomingdale’s in its fall campaign, including selling Howard’s album in the store.

Gwen Stefani’s backup dancers, The Harajuku Lovers, in cute schoolgirl plaids, were also at the party, after dancing in the Lexington Avenue windows. Although they aren’t allowed to talk to the press, Howard learned the fashion crowd is a chatty bunch. Three times during his set, Howard admonished noisy fans in the audience of 450 to quiet down. But he kept singing with passion and spontaneously allowed his backup vocalist, Ilsey Juber, to do a number on her own. “I never do what I am supposed to do,” Howard said.

True to form, Howard sang more of his songs than the program called for, but unbeknownst to the audience it was all to keep the show going for the arrival of his music idol, Richie Havens, who hopped up on the stage to embrace Howard. The appearance was arranged by Lisa Robinson of Vanity Fair, which sponsored the evening along with Infiniti.

“I’ve wanted to meet you all my life,” Howard told Havens. “You are my greatest inspiration. My God, my dream has come true this evening.”